a week crammed into a day

Son2 is back home from annual training where he was support staff and bored out of his mind as he is used to being busy not sitting around twiddling his thumbs.

I sent him this 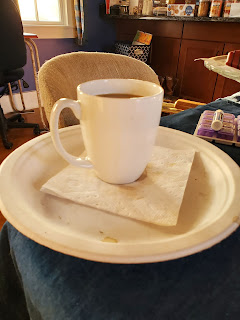 with the message "I miss you and love you more"

He came back with 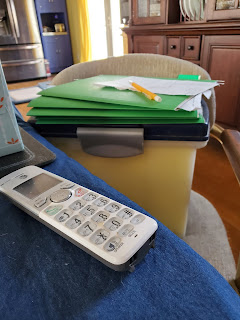 I was sorting recipes as this was my recipe box when I was a private chef.

ANYWAYS, he got home, found out his best friend is having surgery and was trying to be supportive on her , her ex and their kids and another "friend" got into a nasty snit over him helping someone. He ripped her as no one, no one including family comes between him and this friend. She wouldn't marry him when they were kids because she couldn't handle military life. He is not in love with her, but they will always love each other.  The friendship with the other, probably will not recover unless she grovels.

Daughter 4 is fighting the tummy bug (no news of when surgery is).... I must have gave it to her through texting. She had a friend from high school that she has stayed close to start dating a guy Daughter 4 put in jail for threatening her, he is on probation over it (got 5 yrs probation as he is an ex cop). THEN girlfriend had the nerve (had to be a lack of brains) to ask Daughter 4 if they could stay there a week so they could be together. NO. Then she asked for money to get a motel room for the week (He lives in OH she lives in KY) NO, Daughter 4 told her that would be giving her the money from ME that is paying her bills... girlfriend threatened to have boyfriend attack Daughter 4 until she gave them the money. Daughter 4 called cops, boyfriend called his PO when his brother saw what was texted. AND girlfriend is  without a friend and a boyfriend and sitting in jail. When Daughter 4 gets over the anger she will have a broken heart as this friend has stood with her through a lot. I got so mad I actually shook. I wanted to punch.

Hubby mentioned he was getting some weird political messages from a joint friend and asked if there was something going on. Then I got an email with a raging rant and a lot of political lies from him. I got a hold of a friend that lives near him to have them go check with his family as this is not normal for him. His family said he has been banned by Facebook, had the church talk to him and even tell him that he is not going to start his spew during church services. His wife is in denial that he needs help but his daughters did get him in to his doctor and found his sugar was over 300 and had been for a couple months. He has dementia and they (both daughters nurses) feel it Alzheimer's due to becoming aggressive. Both of us told the daughters if they need some thing more than the prayers we are giving to let us know. They asked us to let others know he is having medical problems. His older daughter told me she removed all women's contacts from his email because it seems he is more violent towards women. Since he is in Alabama and we are in Ohio, the threat is only going to be verbal. His knee and hip won't let him drive over an hour due to pain.

Hubby and I sat down and after talking over the "end a friendship day" we talked about the stimulus.

I have been crunching numbers off and on all day and had 4 plans we could take.

We decided on plan 4 (which gave me the shakes also).

Plan 1...put it in savings which isn't earning all that much

Plan 2 split it between bills, gardens and savings

Plan 3 put back for front porch.

Plan 4 take stimulus and half the savings and pay off life ins loans, the medical bills from my surgery and the gardens now.

It's not like we don't have access to more income. Either of us to make a phone call and have money pulled from our IRAs.  Both of us get social security. But going down that low in savings triggered all the times we paid something off and then needed money and couldn't get it.

But reality is  we pay more in interest than we earn in savings so we will be saving money.  We can take April to reboot savings and start paying on mortgage in May. DEPENDING ON TAXES...We will find that out on Monday.

Since I was doing finances I called the propane company and the manager crunched numbers for me  figured we would have 1 more fill before next heating season and told me to order half of what I ordered last year as he could see I was going to have a large credit this year even with the winter we had. That's over $1000 less out go. YEAH!!! that means the air barrier has really worked as that is down 2 tanks of propane a year.

I put in to transfer the money, did the laundry and have it on the drying racks and kicked on the dish washer.

Is it nap time yet?

Figuring out what I am planting is next on the to do list.