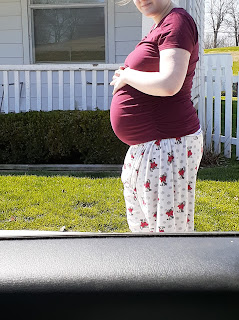 She is hoping for delivery on the 14th which is baby's daddy's  and her cousin's birthday. Lord is she huge. Dilated to 3 and the doctor said he could touch Lizzie's head. Daughter 4 took the picture from her car as Granddaughter is quarantining since she is in labor and will be entering the hospital...soon,  we hope. 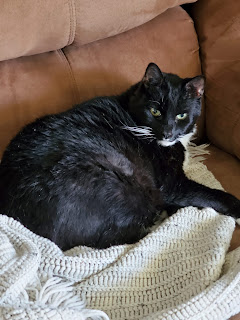 Cuddles, Son 2's kitty. He is my oldest 4 legged grandchild. 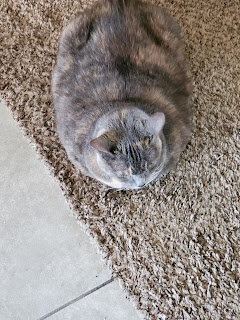 Bailey, she Son 2's baby girl.  Yes I got my kitty fix when Hubby helped Son 2 put the water heater in. 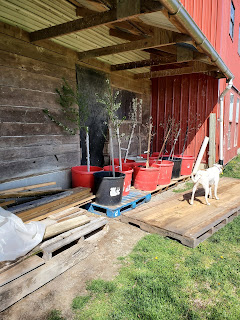 We have high winds coming in along with too cold of temps for the buds on the fruit trees this week. Hubby was glad they were in pots so he put them on pallets and hauled them with the tractor (fork lift on it) and put them on the south side under the over hang. He moves them out in the sun (they get some during the early morning and early afternoon)when the weather is ok and then puts them back. He has it so he can hang a tarp to keep them safe if it gets too cold. He has already been warned by a couple people that if the flowers get cold we won't get fruit. 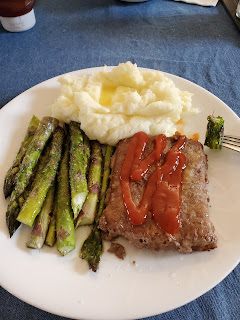 First meal of asparagus from garden. I had to pick two nights in a row to get enough to go with our meatloaf patty and mashed potatoes. I imagine I will be ran over this coming week. They say the harvest is 3 wks long but last year it was closer to 5 weeks. We will get tired of eating it.

We took the dogs for a ride while picking up our taxes from our preparer, thinking we would stop at the vet's but the vet's was packed so we just came on home.

Charlotte got stuck in the front seat with us on the way over as the boys took up the whole back seat. She made sure on the way back she had back seat as Wilbur got in front to watch us go in. 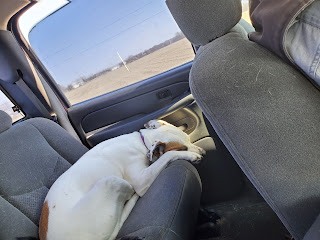 Wilbur got in his standard position when the window is cracked open. He actually sleeps this way. He won't ride in the front, gets car sick that way. 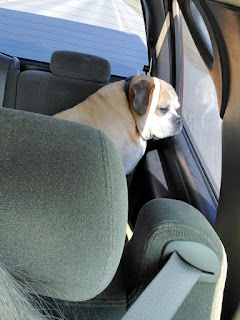 Poor Rascal, he could have laid on the floor, it's wide enough Wilbur has slept on it or even put his head on Charlotte as she doesn't care. But he doesn't like to cuddle much. Hubby says when he sees Rascal cuddling with me he doesn't know if I am sick or if the dog is. It's usually me. 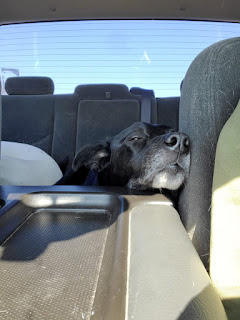 I put the middle part down so he could at least put his head on it.

We started planting the garden. To make it easier of what varieties I am planting, I made a spread sheet.

I will wait another week before I plant more.

Since I was starting in the gardens I reminded Hubby he needed to cut the last 5 of the 2 x 8  boxes and get the wood for the 2 boxes that would be 2x 16 for strawberries this fall. I will paint the 2 x 8 boxes (they are plyboard). He came in and said the plyboard was cut. Too windy and wet to paint but when he was rummaging around he found enough plyboard to make 4 more boxes.

Okay, he has bickered with me for years about the size of the garden. So it was a shock to hear him suggest we have 4 more boxes.  THEN he added that he thought if we had the money this fall that he could build a small green house on the south side of the barn. It would be blocked from the north cold and get the south sun. Open to the east so I wouldn't have to shovel much snow if I used it during the winter. He would change the white metal roof in that area to fiberglass roof (and change the mudroom door awning to the same) that would let light come in but block the weather.

I asked him why the change of mind. He said he saw that the Amish didn't go without fresh veggies and fruit during the winter. Some even had greens still growing in their green houses. He was the one that went to the store and saw the lack and the recalls.  He doesn't think this coming winter is going to be any better and he thinks we will still be helping Daughter 4 who is now in 5 days a week physical therapy. She had commented she wasn't able to handle walking her dogs one at a time and the doctor put her in therapy to rebuild her strength.

I was okay, design the green house and price it out. Yes that means we won't be paying off loans or on mortgage as much. I will be crunching numbers for sure and warned him there would be a change in our life style when it came to store bought food.