Day 15 and Day 16 of Pantry Challenge 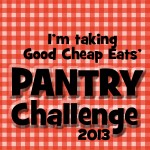 It's official, I've caught the flu that hubby had.I wasn't completely over influenza A so this round with influenza B is just a bigger drain on my system. All I can think is thank heavens I got the flu shot or it would be a lot worse and I would most likely be in the hospital like my daughter's mother in law and niece on her hubby's side.

Last night since we were sitting in the doctor's office until 4:30 and then had to wait until 5:30 to pick up my new meds. Hubby insisted we go to the Chinese buffet and eat dinner. He used the argument that I could get soup,food that had ginger cooked in it and Chinese mustard that also includes turmeric. I have taught him well. I didn't argue back at all.Just figured that was another meal that got moved on the calendar.

Tonight we are having ham sandwiches. I got a ham from Aldi's for half price and tossed it in the oven to bake tonight for sandwiches.Neither one of us feels like eating so a sandwich with an apple or some raw veggies will be plenty.

We did go to the grocery store also to pick up fresh produce,milk and it was suppose to be ground pork...well I am not going to pay $3.89/lb for ground pork when there is a pork roast sitting right by it for $1.29. I needed 4 lbs for the next 2 months so I grabbed 12 lbs of roast. (FYI a 4 lb roast with bone gives you about 2 1/2 lb ground meat)Spent the same amount if I had bought the 4 pounds of ground pork and brought it home to grind myself. I have a food processor and an old fashion meat grinder.Two of the roasts got ground up, their bones got tossed in to the crock pot with the third roast that will cook on low over night to make shredded pork. Balance of grocery budget is 1/4th of what I normally would have spent by now and we have meals on the menu that is in the pantry until March.

Enjoy your night.
Blessed Be Juls

Posted by Chef Owings at 5:05 PM No comments: