Birthday cards on hold and in the garden

Because I refuse to write a check and send it in the mail,(several disappeared last year) we told all the kids we would be coming down (as they are over an hr. away) and dropping off birthday cards when we go down for Lizzie Mae's 1st bday, Daughter 4's 1st grandchild.. I'll check to see who is in May and take theirs also. None in June of the kids or grandkids or great grandkids. Hubby's mom is June.

As our norm we combined our errands with our chiro appt. and we took a grocery list from M for Aldi's. She wanted us to get her 10 pounds of bananas and cream cheese as she always wants 24, with 11 in the family I can understand it. She used to ask for it every month, now it's every 6 wks and a bunch of celery.

First we stopped and made Hubby's truck payment that isn't due until the end of the month BUT we won't be running errands until the day after it is due.

Then we dropped off some old meds to the police dept as they have a box in lobby for that kind of stuff.

Then we stopped at our bank (as they closed the branch here)to made deposit for the business.

Then we went to Menard's and got filters (had to order 1 as they don't carry that size), we got Chi Chi tortilla chips (the only ones Hubby likes), big bag of Fritos (can't find them any where else and we use them for spinach dip or chili) and candy bars that was on sale and 9 boxes of Puffs tissues so we don't need to stock that up any more. Plus got the wood strips to put on the kitchen porch ceiling where the seems of the paneling is gapping. WAS paid in full by rebates. We are good with working the rebate system ... We paid for a grill, smoker, the deck material, kitchen porch material and half of the front porch material with rebates from buying other stuff when remodeling this house.

Then we went to Kroger's fuel to use the points, I had couponed a double points two weeks ago so we used that up. Kroger's just happened to be the lowest cost in the area also.

Then we went to Applebee's for lunch. Got the "bowl" meal, leftovers made supper so it figured $12.50 a meal for the two of us.

Then we went to Chiro. I still have an out of pocket so we had to pay for both of us.

Then to Aldi's, I got celery, peanut butter, catsup, lemon's ,limes, oranges and onions. Hopefully I won't need to buy onions after this. Hubby got celery and bananas for M

Then we went to Walmart on the way home for M's cream cheese.

Unloaded truck, played outside with Charlotte who decided she needed the box of tissues off the bfast bar (not chewed on but on the couch) and my GasX off the table (also not chewed on but on the couch) means I need to double check to make sure there is nothing that can harm her.  She knew she had been bad... was giving lots of kisses and nuzzling.

Since supper was leftovers it was a YEAH ME for not having to cook.

Hubby checked his email and found a online lecture about grid failure. A friend of Hubby's is an Emergency Management Director had just been in a seminar for this so was allowed to share it. I asked if this was why he wanted stocked now. He said no , he was hearing that sources the Amish use was not being able to supply them like normal or supply at all. But this definitely made he start thinking about stuff. 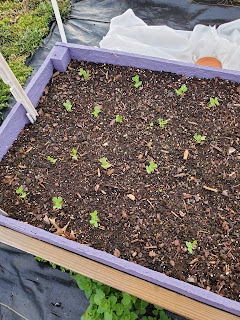 Peas are up (will cover this coming weekend due to 32 degree ).

Prayers for peace. Blessed be