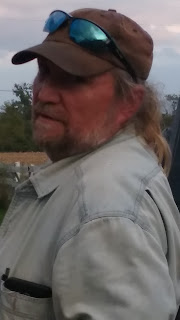 It's my favorite photo of him. He was out on the tractor and turned around to check on something. I was a good 50 ft from him so he didn't realize I was taking a photo.

He came home Friday after hauling hay for Amish and told me we were going to check our stock for everything. He did mean EVERYTHING. He wouldn't say what he heard but he was clear we were going to be totally stocked up by May unless it was something for the gardens. It was worse than I thought in the maintenance stuff (thought we had until Aug  and were out in two areas) and was better than he thought (he is the one that forgot to tell me we needed furnace filters).

I did several orders at Amazon (covid going around again on our area) and the 12th when we go to chiro we will do a pit stop at Menards for filters for the furnace, water etc. and use the rebates we have to pay for it with mask, gloves and sanitizer in hand. Starting to see limits on a few items

I went to the grocery store (masked up etc.)and stocked up. I saved 32% and got double fuel points. I picked up ground beef . I made taco meat, ground beef crumbles, sloppy joe, hamburger patties and froze it along with bacon, Canadian bacon and sausage links. Today will be making meatloaf and freezing it on old cookie sheets to make meatloaf patties. Plus meat balls precooked and put in the freezers. I got frozen Gordon's fish patties. We went the Friday the week before for fish dinner at the local restaurant and they didn't get any in. Horrible during Lent.

I spent part of Thursday evening visiting with an Amish lady (my age). She is growing sweet potato starts for the first time in decades. Her youngest son (her husband and her live in the Dawdy (grandpa) house) who lives in the house connected to her is doing potato starts that he has not done in years. They have bought from other Amish that are now trying to feed their own.  She was talking about how cash flow was tight (several medical bills and 3 fires , they share those costs in their church) and how she was making things stretch. Growing more basic foods for storage. She was worried about canning lids ( she uses about 3000 a year for the two of them, remember they can their meat also and eat 3 meals a day) being an issue again. Said they (meaning everyone in her church) had placed orders of lids for twice of what they usually use. Hoping to get a bit ahead. I already have mine as I ordered in Jan. Due to their ages and health she said they eat a lighter breakfast (6 am)  now, just toast and egg and not the white potatoes. Dinner at noon is now their main meal. What ever is left over from dinner becomes pantry soup for supper at 6 pm.. She adds a can of cream soup and maybe a hand full of noodles. She doesn't add broth as that is for cooking noodles without anything. But will thin the soup with water or tomato juice. She makes 1 qrt of the soup and serves it with bread. They are trying to eat healthier foods. She laughed when she talked about going from a 12 inch pie to an 8 inch pie but still cutting it in 8ths. Was an interesting visit.

I got an eye infection, it's a lot better but one of the things doctor told me was to pitch any makeup INCLUDING face cream that I had been using. I knew makeup but didn't think about face cream. Wasn't much to pitch of either.

Water softener company let us know the price of delivery was going up *not a lot* as we have them deliver when they are already in the area so no extra trips. They carry the salt down to the basement also so we don't have to figure out who to ask to do it for us.

Electric company has let us know rates will be going up but they didn't know by how much as they are trying to change some things to off set the increase. We have a co-op.

Propane company let us know that propane has already doubled since last year*it had increased by 30 cents last summer right* and they are guessing that it will hit $3.259/gallon by August. I am thankful we already had insulated well enough to cut it by 2 tanks but STILL I need 2400 gallons $7821.60 plus tax of $567.07 for a total of $8,388..67 IN FULL by Aug. SO that has to be put back out of the budget as we are not pulling from the IRA's for it. I am thankful we have already had an energy audit and I completed most of it. I do have some caulking around baseboards and insulation foam pads on outlets to do yet.