This month is flying by. We have taken the summer gardens down, I put row cover on the fall/winter gardens 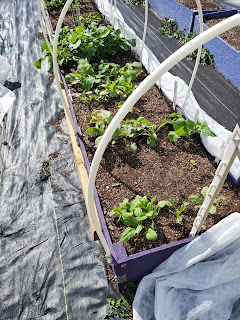 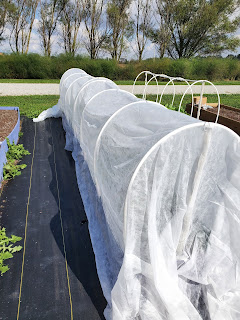 The first one is how they look now. When it gets to a frost or freeze it will look like the second one. I replanted some in bare spots were I had already harvested.

Instead of horses we have the guinea hens visiting the pond. Rascal was frisky that day. Charlotte is always frisky 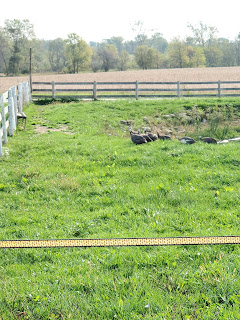 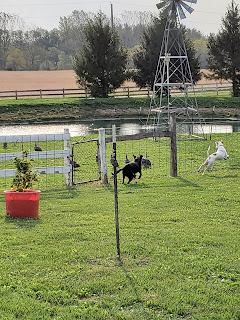 The hens just ignore them.

Daughter 4's daughter got married in a small wedding at the preacher's house which is her new hubby's uncle. Five generations was representing his side, four on our side. Daughter 4 looked at me and realized it's my generation that is the oldest now .It kept the focus on the vows and not on a big wedding. GD said she has seen that those with big wedding crash and burn a couple years down the line when times get hard. But those that kept it small haven't. I told her it was not the amount spent of the wedding but the attitude of why it was spent that crashed. Thoughts of "I deserve expensive things given to me" will wreck your life. GOOD life not based on money.

M is doing a lot better, she still has help come in after E had the 4 little ones for a day and complained he didn't get anything done ... then laughed and hired someone to at least come in half days. He's taken to working on the upstairs (drywalling) when he is on childcare duty. M and I just laughed and laughed.

I spent yesterday playing with the budget since Daughter 4 comes off OUR budget beginning of Nov. Still tinkering with it.

Fine tuning the last of the outside projects that to be finished this month. Right now it's more of getting him to quit changing what is planned and just get it done. We went a couple rounds about the roof over the basement ramp. J who is doing the porches stopped by to tell us 7 -14 days he is coming in to do both porches in 1 day. Bringing the work trailer and full crew. Hubby asked him what he would do for the roof... it was exactly how I said to do it. GOT TO SMILE.

I started with 76 items to get done this month I did that list on the 3rd. As of this morning I am down to 38. I told Hubby since he isn't hauling Tuesdays that he can get on his own jobs. He didn't looked thrilled with that but he could actually finish some stuff in a day or two if he quit putting it off. He is a procrastinator which has been a hard learning curve for me as my entire family is "let's get it done and off the list".

After spending time with the budget I tinkered with the grocery list. I have 4 things in the frig I bought 2 wks ago still not touched. Still good but not even opened. HUM...

We decided to go to Kroger's or Walmart once a month and then 2 wks later go to either Aldi's (if M needs something) or Save A Lot.

Got to get at it.. back to the to do list