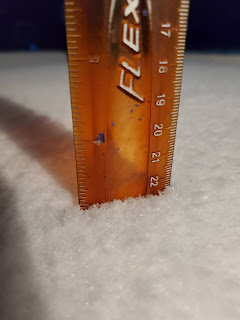 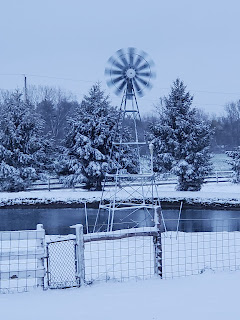 Hubby got a project done. 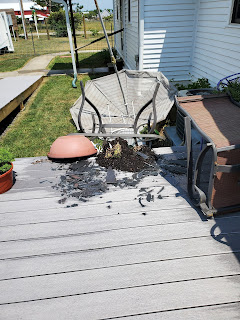 this was what was left of the deck table after wind storm last summer. 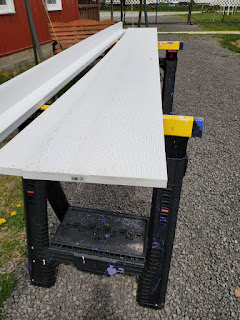 Hubby got these two boards ...the one to the left is a corner board 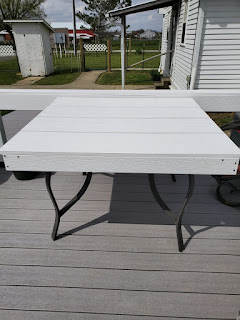 He used the metal frame from the old table. This table is heavy. We thought maybe it would be light but it's not. I won't be carrying it by myself for sure. 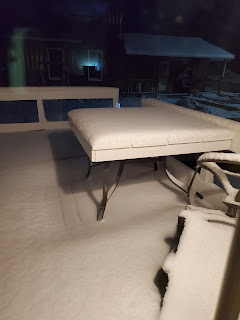 It's sturdy enough to hold 3 inches of snow.

E's brother in law stopped over last night since he won't be working today and tomorrow due to weather. He took a good look and a couple solid kicks to the concrete and told Hubby it could not be extended due to the field tile. He had helped build it. It was not failure but looked like two batches of bad concrete as it should have held another 30 yrs. He can reuse at least half of what is there. He will be figuring up a  better estimate counting on  Hubby using the tractor to do the digging, reusing the bad concrete for fill, us already having most of the blocks and concrete for the entrance... he is thinking around $6000 to the most being $10,000... he just doesn't think it will be that much. He is going to look at price of having ready made concrete brought in or bag concrete that they mix in a wheel barrel with labor to figure out the cheapest way but make it last at least 30 yrs. AND he will figure in how long it will be that the dogs can't go down that way. Since that is a lot cheaper than the other two estimates, we will be going with him.

I can cover that without pulling from the IRAs YEAH