Frugal fail...sending Hubby to store for ice cream... he bought the expensive klondikes yes they are my favorite and yes I was craving chocolate which took half of the $20 budgeted for the month.His answer was they are medicine because I need to calcium and I'm not eating cheese, yogurt or drinking milk and it's chocolate to help with the cravings and it was DARK choc so that helped with the depression....Then on the way to Great Grandson's 1st birthday party that was 2 hrs away..we pit stopped at the gas station to potty and walked out with $21 of food because it was lunch time and I have to take my meds with food and we didn't think about bringing snacks as we knew we would eat at the party but the grandson let me know After we headed that way we wouldn't be eating until closer to 2 ...at least most of it was healthy and we brought half of  it home and I was able to cover it with the eat out fund that we put aside for the month.At least we thought to take water. We didn't eat on the way back l even though it was pass dinner time like we planned and ate mini eggrolls that was in the freezer instead since I had meds to take with food...I wasn't hungry but hey meds need to have food or I get sick.

I gave my great grandson his afghan made with yarn that matched his and his parents birthstone. I only had to buy one skein of yard due to his Mom being an Oct baby and I didn't have enough of that color of pink. 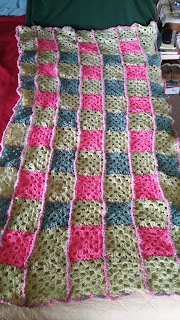 I think I will start looking for shades of blue to make him one for his 2nd birthday.

We took water to the birthday party to drink, it was in park. I took my ice pack sling for my arm in case and instead of buying a bag of ice for the cooler to keep it cold I dug out every lunch box, medication ice pack etc I had tucked away and put that in the cooler. Did a decent job for being out 8 hrs, sling was still froze as it was on the bottom but the rest was starting to really get warm.

I scored at CVS between the coupons and sales I eliminated 7 more products I needed in the pantry. I budgeted $300 for these items...paid $144.04  with a savings of $155.96... not only am I happy about the savings but happy that I actually knew what to budget. My next goal is to finish stocking the personal care stuff and medical supplies. I've been watching the sales and have the coupons already.I don't buy name brand much but what I do I try to match coupons and sales. Like Pantene shampoo/conditioner... CVS had it buy 3 for $12. I had a coupon that was buy 3 save $5 and a coupon that was buy 3 save $2. I got 6 large bottles  shampoo/conditioner for less than $3 each...THEN I ADD 1/3 of water to them  so I will end up with over 2 bottles for free.bringing the price down to around $2 for a large bottle. Doesn't work as well with Sauve.

I gave what few cucumbers we got that Hubby didn't want to eat for a friend that made refrigerator pickles so I would have pickles for myself since I can't handle canning with my arm in a cradle sling. I gave tomatoes that were going to go to waste to my ex son in law and his wife. Their tomatoes are still green.

My cucumbers and squash got hit with the squash bug... I won't replant as I have friends that are being ran over produce.

We turn the AC off every morning and open the house. THEN only turn it back on it's it's over 80 and there is no breeze. If there is a breeze. Ac stays off (hubby will use room AC while sleeping during the day) .Hubby has started turning the lights off without reminders and turns the tv off after the news as figured he didn't need to zone out with the tv on.

We ate from the pantry and ate Plan overs twice. We will be making the menu today for this coming week. We have enough pasta left over for tonight.

Our pressure switch went out on the water pump and the landlord showed me how to fix it and keep the water on until he got a new switch that he installed himself.Which was luckily to be the next day right after breakfast.

We put in the order for our propane and pulled the money to pay it. Put a hole in the savings but it's paid in full at the lowest price. It always seems to go up the 2nd week of Aug.

I am starting my winter produce list that I buy at the Sept auction.I can imagine that it will change weekly as I recheck the pantry.

I am looking at the Christmas to buy list also this week and making a list of what is still needed.Mostly there are 2 crafts I want to make that I don't have all the supplies for. I have a back up plan if the costs is above when I have budgeted.

I contacted Menards about a rebate that should have came in and hadn't and they traced it and it was sent. Glitch in their system.

My son bought 3 of the shirts I had bought (I bought 5) for when I was wearing the sling, I'm to the point I can put on a shirt over my head if I don't raise my hand, actually I lean over and put the bad arm in first.

We are working towards not using disposable items as much. I got rid of the paper napkins decades ago but Hubby's go to when he eats lunch or a snack is a paper plate. I told him I wasn't buying the better paper plates (as he won't do the thin cheap ones) for him to use when he retires so he needed to quit pulling the paper plates that are in the supply for the family reunion and Thanksgiving (because I don't wash dishes by hand for 100 people).., He is doing better.I caught he was doing it when he was on shut down and was actually home and the plates are stored on the shelf going to the basement which is an area I don't look much at. BUT since we ate lunch together every day I caught it. He also wants to use my freezer bags for things he is putting in the frig and going to eat later. I am reminding him to put it in a storage container

I transferred money to our Ally savings.

I checked our credit scores at credit karma

We look our Maybe buy house list when we are going some where to see if we can do a drive buy to save fuel.

Other that noticing we are now having Oct weather in Aug everything is pretty steady on the frugal front...as long as I limit paper plates and buy the ice cream myself.
Posted by Chef Owings at 7:52 AM 1 comment: