Frugal stocking of the pantry and my frugal week. 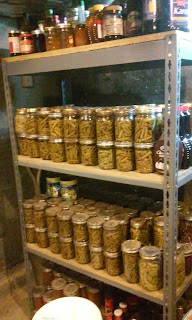 The first thing I have ever told my kids when they went out of their own was have a pantry, even if it's just one week more than you shop.Have an emergency stash of food and water for hard times whether due to weather or no job.It's frugal and it can be a life saver.

I have a pantry, my kids and grandkids will tell you it's a grocery store. One that on several occasions they have had to ask for help feeding their families and were grateful I had a "grocery store" pantry.Yes I stock it like you would see in the store,veggies are together, fruit is together, tomato products together, sweets (pie filling, jams, fruit butters, evaporated and condensed milks etc) are together, in fact the choc chips, caramels, marshmallows are in containers in that area.I need a taller or wider area for tomato products as it takes up more than that one unit.

Variety is the key to what makes us happy.

IF Hubby walked in and said "I'm down to 3 days a week" (paycheck would equal unemployment but his company keeps the people working so they have health ins, WE ARE BLESSED)and he has in the past. I would scrap up the money and buy potatoes, onions, garlic, sweet potatoes and sugar. and that would cover us for several months. We have dog food that would need replaced but I would feed the dogs people food of corn bread mixed with veggies, especially carrots. I would even be able to do the Christmas cookies and candy for the family but not as much of it this year.

I have 1400 sq ft in gardens,including veggies, herbs and strawberries. Hubby kept mowing down the other berries.We don't have fruit trees here, something we have already decided on having when we build our own home.I miss my grape harbor I grew up with.

I was raised with a pantry, both of my parents had pantries (they divorced over 40 yrs ago) when I was an adult. Dad whom is still living has a small pantry still that he could eat for a month is something happened. Growing up we ate the pantry until it was gone, didn't think about how long it had been in the pantry, both parents are/were as Mother has passed several years ago for eating food that was over 5 yrs old. You live through the Great Depression, you don't throw food out EVER. I focus on eating it within 3 yrs. In their lives if things didn't grow in the gardens, or if not enough grew, you went without until growing season the following year. I, on the hand try to fill in from Amish sellers or local farmers or really cheap prices.

Since we are talking of Hubby retiring, us moving and building in 3 years. I want to stock now, and the focus on eating everything so what goes in to the new home in that year while saving all that money to build a pantry in the new home.

This past weekend I've been focused on restocking the pantry. Something I realized I had been neglecting and the price is going to be hard. You would think I had learned that lesson already.

The white object is the top of a 5 gal food grade bucket of long grain white rice.There is 10 servings of rice (1/2 cup cooked) in a lb. I have over around 10 lbs. We use 4 servings a meal, so I have about 25 meals in that bucket. I have other buckets of rice also. I have over 100 lbs of different dried beans (15 varieties  and yes, we eat them and yes we eat meat).

The top shelf is an assortment of  condiments like Asian sauces, syrups etc.I make some of the syrups.I would love to learn to make the teriyaki sauce I like. Still surfing recipes for that.

The middle two shelves are green beans...that Hubby doesn't like to eat but it's what is left from what he brought home for me to can.There is enough for 100 meals so we will be having green beans twice a week with one of those times being 3 bean salad which he does like.

I have 5 of these shelves plus 2 that are only have as high but twice as long so they are equal to what is pictured here. I just spent the weekend filling in some of the empty spaces, even with coupons and sales combined it was a pretty penny,(savings was around 50%) luckily I had been saving grocery money from the months under budget and a few other spots to cover it.I have a 27 cubic ft, 21 cubic ft and a 7 cubic ft deep freezers along with my French door frig freezer.The freezers are full, in fact I need to focus eating out of it to have room for meat this fall) I used to have a second frig that I used for condiments, beverages and bfast foods but we lent it to our son when he bought his house over a year ago and I don't think it's coming back as he just had a roof leaking along with a drive shaft broken in his car. (But he does have a small pantry like my Dad).

BUT still I have 108 items missing...not like 6 cans of hominy, like 6 different things that is 6,12, 24 of each thing. I have over 300 empty spots to fill before November 1st which is when I set my pantry to be stocked except for turkey, ham and prime rib for the freezers and potatoes,sweet potatoes and onions for the root cellar.

Out of the 108, 18 things is coming from my gardens for me to make.... the rest is if we have the money, can I get it cheap and of good quality.

That's a focus of 9 items to be filled each week.

I rolled coins to help pay for the kids and grandkids Christmas. I keep my change for this reason. Dad told me to do this.

I dehydrated herbs and mints again this week and I'm dehydrating eggs that was on sale for 49¢ a dozen right now.

I harvested cherry tomatoes, the last zucchini (bugs killed the plants) and another eggplant.

I dug up the onions for curing for storage....no where near what I need to get through to next season.Hopefully I will score 100 lbs at the Amish auction this fall.

I took my extra grocery money and with sales and coupons stocked up in over 35 areas.

I also combined coupons and sales (that wasn't advertised) for paper products that I hadn't planned on buying ( looking for food on the pantry list) but couldn't justify not getting it. I won't need any for several months now.

In sharing some info at the stores, I now have 2 other places that are not my normal places to check into for items that is cheaper that I buy (like freezer bags).

I shop Family Dollar, Dollar General, Save A  Lot ( ours lets me order 50 lb bag of potatoes in the fall) Aldi, Walmart, Kroger, Wagner's IGA, Anna Market IGA, Winner's Meats (also does frozen case sales of fruit and veggies in July), KAH meats, Walter's Meats and the Scioto Valley (Amish) Produce Auction. Winners,KAH,Walters, and Anna Market do a meat bundle sale in Oct. I used to shop Odd Lots, that became Big Lots but they closed in our area.. I was told to check out Ollies (I get Christmas decorations there but hadn't looked at other stuff) and Foodtown. My son has an Asian market near his work that he is willing to stop and check for stuff for me as he has been buying some of his food there. Teriyaki sauce might be cheaper there along with some other Asian foods I use.

I reread some of my old cook books (1937-1943), Tightwad gazette,a couple of them Appalachian and Cherokee along with a couple books with  recipes from the Great Depression, several Amish cookbooks and a couple Italian cookbooks that reflect the cooking that my own Italian grandma (Nonna) cooked....really she was my great uncles wife mother...but she adopted me as her own for better or worse. Gets me back to "down home cooking" instead of going out and buying a ton of things we don't really eat much of.

My spices are bought at an Amish country store or Anna market. I grow most of my herbs.I have been known to go without when my harvest is low. Basil was one a couple years ago.

What can you do to save or stretch what you have?

Posted by Chef Owings at 4:00 PM No comments: