Sick and tired, tired and sick LIFE GOES ON

and then I look at these pictures and keep right on going. My Daddy. 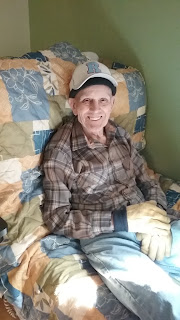 I got him to smile by telling him it was for his first grandson and he first great grandson.Wnat Daddy to do something, corral a grandkid into getting him to do it. We thought we would lose him, he was sick of life in general and dog tired.Could barely get out of the wheelchair let alone adjust himself on the bed 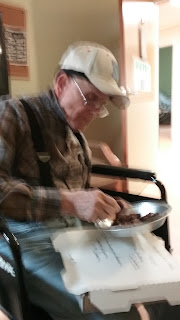 A little blurry as he didn't want to stop eating the brownies I brought him for his 91st birthday... is always a little sad on his birthday. They buried his Mommy on his 16th birthday. BUT as he says, her death freed the family to move where there was better work and a better home because they had to stay at Hocks Station while she was living to get her meds. Train was 3 days late due to flooding in the area and she died from withdraw. He eats like a horse now, can stand and balance and hit a ballon that the therapist hits to him. He pedals his "mini " exercise bike 40 min a day now. 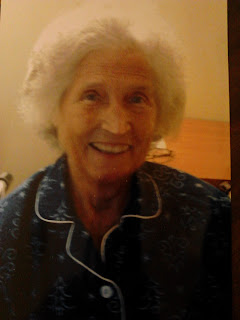 First day of the nursing home that she knew she wouldn't be walking back out of as her cancer was back and running full force through her body. Still she didn't have to be bribed to smile for the camara. She's been gone 6 yrs and the hole she left can't be filled by any one of us. She ran this family with an iron fist like her great grandmother ran hers. Didn't know how to handle those of us that didn't buckle under and do as she wanted us to do. Said on her death bed she was proud of those of us that stood for what was best for us,that she didn't know it all. I should have recorded it as at times it's hard to hear her voice. Except Daughter 2 and Daughter 4 and I all sound exactly like her. Even Daddy, Pop(stepdad),Hubby and Son2 would not know who they were talking to if we called and they couldn't see us. LOL.

Daddy could have gave up but he fought instead, Mother fought to her last breath...  How can I do any less?

My congestion heart failure is flaring a bit, understandable with 209 and losing an Aunt that was like a sister to my brother. Daddy in the nursing home and we aren't sure if we will be able to bring him back out or how to pay for him to stay in.Son2 reenlisted, proud of him but heavens the worry of him deploying and me dealing with his cats and house is always there. Hubby is having troubles with his memory.... is it stress or dementia?....

GOD only gives us what we can handle as he carrys us when we can no longer walk.