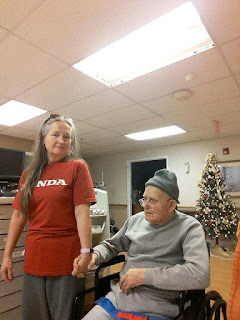 Daddy was awake and talking more than one word sentences when we saw him. He nearly broke my hand with his grip when he decided he had to hold my hand while he walked his wheelchair.  Was a good day as he said as we were leaving.

We stopped in a visited for several hours Hubby's parents , not only for Christmas but it was their 63rd anniversary. They are having several family in on Christmas and invited us. Hubby is not sure he wants to go since she is talking about over 50 in a very small house with 1 bathroom. He is not treated right by his two brothers. His sister does try even though there are several years between them. I told him we could go visit his siblings in Jan if he would rather do that but should at least call his parents and wish them Merry Christmas. 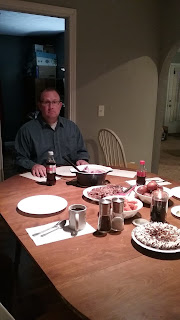 Son 2 cooked us Christmas meal last night as our schedules are not mashing at all this holiday. Was a wonderful meal of pot roast he did in the crock pot and baked onions from the oven (he got a smaller crock pot for himself and forgot that when he went to cook everything). I got him an instant pot as he had melted his when he forgot his glass stove top was still hot and put it on the stove. I also got him all the little extras that he could use in it. Came out the same amount of money as we gave the rest and since he is single it was the only gifts he had under his tree. He left a couple of the smaller ones under it for Christmas day.

Tonight, Christmas eve, Son 1 will be here (he usually refuses to get his picture taken) and I will have prime rib (using crock pot, new recipe, will let you know how that goes) sauteed onions and mushrooms, leftover carrots from Son 2 meal, baked potato (actually baked as the oven will be on anyways) and homemade bread rolls , which is why the oven will be on.  Shrimp cocktail and salad .We have fruit cake for dessert but I doubt if anyone will want any of it.

Tomorrow we will go back in to see Daddy again.

Hubby worked this morning as he didn't get the job done last night since we needed to be at Son 2. He has work lined up after Christmas. Not as much as the main person he hauls for won't be back up running until Jan 6th. Main person  works for an Englisher and they are on shut down until then.