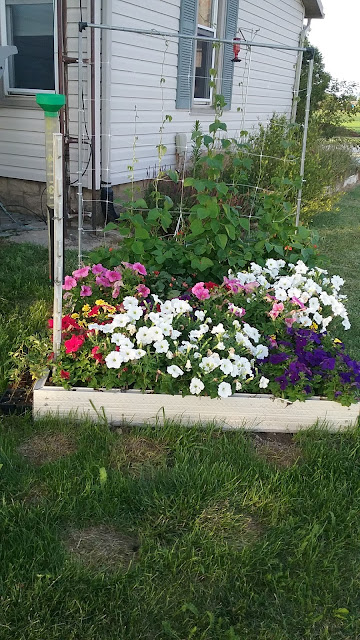 and the flowers continue to grow LOL. If you read June's post this is the same flower box. Notice how much the scarlet runner beans have grew.You can just barely see the red on the blooms that are starting. You will also notice spots from where flower pots sat for a week to catch the rain that kept coming in like a watering hose set on a timer.

I got all the warm weather clothes, bedding and furniture throws out and the cold weather ones washed, dried and put away correctly (meaning I didn't dump it somewhere instead of walking upstairs and putting it in the closets where it belongs out of season).

We got all the yard mowed (4 hr job just mowing) and the bushes all trimmed and about half the things trimmed with weed eater ...that will be finished tomorrow. Plus Hubby needs to cut a tree that has decided to grow up in the lilac bush. Landlord's oldest (has cattle and hogs in the barn here at the house) did some tree trimming on the other trees and then hauled that wood including some bigger limbs that had fell out of other trees during the storms for us since we "look" after the cattle and hogs for free.

Bugs got the rhubarb but I didn't cut it down, I hope the bugs stay on the rhubarb and leave the rest of the garden alone.

I pulled the garlic, it's about a month earlier than normal but it's ready and with the constant flow of rains I didn't want it to rot in ground.It's taking it about 2 wks longer to cure than normal.

I harvested one lonely green bell pepper that is suppose to be red or orange but fell off it's plant during the last storm.I can't eat green bell peppers (messes with my Crohn's) so Hubby is going to get to eat it with his brats tomorrow with cooked onions.

I planted more tomato plants and still have 18 more to get in ground this coming week.

I planted more onions...over 100... and I have 200 more to plant. I just can't bring myself to toss them away and no one wants them to grow so in they go. I usually store them in panty hose hung from rafters or rod in closets along with drying a few. A friend mentioned she cuts some up while in the "green onion" stage including the green and dehydrates them for winter....she also stores the dehydrated green to use instead of chives. I grow chives regular and garlic so I don't need to do that but a mixture of onion and their greens would work for me I think.

I have 3 heads of lettuce that need ate this week...We will only eat two and I will let the other bolt and reseed for this fall. There is some spinach ready also.

I need to replant lettuce, spinach, onions (SIGH) and then I will have to think because I am having surgery and will be down to one shoulder for about 4 months...end of July until end of Nov. and then the plan is for me to have the same surgery on the other. I don't think the doctor thought I was funny when he asked how I was even using the arm with the way it was torn and I held my arm up and said like this. But Hubby is concerned with him being able to handle MY workload on top of his and taking care of me.

I spent $30 at the end of June for sea salt grinders (idine salt causes me issues with my Crohn's) tortilla wraps, milk and lunch meat that I had coupons for and was on sale. Even though we don't care for sandwiches much we have been eating lunch meat, cheese and veggies in wraps for our mid day meals. I struggle to eat, always thinking of causing a flare up.

I have my son's wardrobe and small cabinet yet to do and a set date to go to the older daughter's to help her with yard work that she doesn't have tools for.We want to go see both our parents before my surgery.

Yeah that is a biggy. If you wonder why, tie your dominate arm to your side as if in a sling and not move the arm away from your body for the day.I  saute a lot of fresh veggies that have to be cut...try cutting with one hand. I have a meat slicer, mandoline, chopper, and apple peeler. Hubby knows he is going to be prepping. Better is I was born left handed and was changed to right due to superstition so I'm not as bad off as other can be.

We hauled 3 loads (about 5 -10 boxes) to thrift shop. Took some leftover scrap wood from the old homestead (moved in 2008) and built 4 bedside stands for the youngest daughter and her kids. I thought that dropped it down to only OUR stuff...nope, I already saw 4 boxes of assorted toys and books that belong to the grandkids that they have out grown so nope, not yet. I should have charge when it went over a certain amt of time of me storing this.

I switched where I was getting my vsl from and saved over $10 a bottle AND it arrives on time.

We bought a plumbing auger (snake), we have a drain that is starting to cause problems and we have natural drains (hole in concrete basement floor for pipes to go into to flow down field tile and then we have a separate sewer line which goes to the septic tank and leach beds. Luckily it's the gray water drain but I don't like using much drain cleaners because the fumes come back up those natural drains in the basement. Got it on sale and used it here and then at the one daughter's who was going to pay around $60 for a house call.

We used our Kroger points and Speedway fuel card for gas.

We have been doing better about eating out of the pantry until last Friday when I was in the ER for my Crohn's (stress of medical issues and surgery). 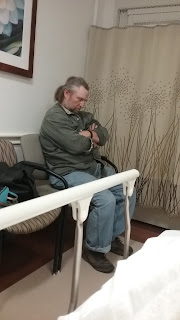 Yes Hubby is sleeping. He's had a lot of practice through the years of sleeping at the hospital with one us. He is the one the kids, especially the girls want with them when they go in , even now as adults.

The bad news was partial blockage of bowel and major Crohn's flare up. The decent news was I could go home with a pain med of my choice( I can only take 3 different ones or I flare up) and drink my meals for 3 days and see if I could "get through" it. Better news was if we paid the copay right there as I was being registered we could save 5 %..Hubby wrote the check. That made the fourth medical bill we paid that we got discounted for paying before it was due.

Not so much good news is Hubby bought his meals for the weekend at the grocery store since I was on liquids. The OK news was he bought a family size meal of fried chicken and split it up so I wasn't smelling him cooking. He used the last of the chicken to make himself chicken salad. I am thankful today I am back to eating somewhat. I'll probably be eating baby food while in my wheelchair when I get older.

We researched money market vs savings etc for our new savings for emergency acct. Best interest was Ally Bank.

I ordered a 2nd dehydrator just like my other one. Excalibur dehydrator. I found one on Amazon for what I thought was the lowest price I could find until I hit Wikibuy and got it for $40 less. I read about Wikibuy on Forbes.

I have a lot of things I have to get done before the surgery at the end of the month or they won't get done at all. Like my great grandson's afghan for his first birthday about a month after my surgery.

The "good" side of this surgery besides getting my arm and shoulder fixed is it will give us the expenses of when it's done on the NEW ins that starts in Jan. We pay 10 % now and will be paying 20% then.

One last picture...this is our lane, 2/10ths (why don't they call it 1/5th) of a mile. Hubby usually mows it last so when he is coming back up it he knows he is coming home and the job is finished. 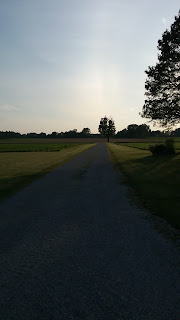