I have a habit of looking back a year or two at pictures and seeing what I was doing at this time of year. These are from last year. 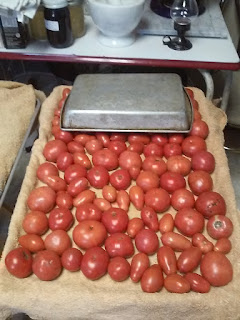 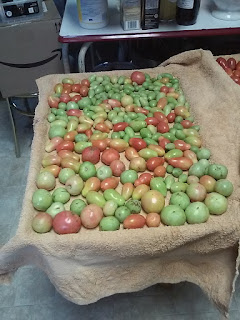 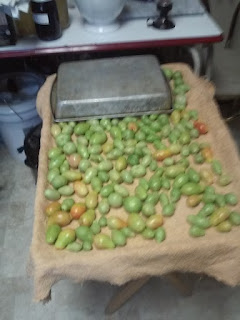 Well I am not doing tomatoes.. but I do have some apples to finish up and a few tomatoes to use fresh along with red bell peppers.Butter to can.

We priced taking our daughter's dogs to a different vet but it's the same price after driving to it.The other vet was closer to her so would be easy for her to meet us there and her deal with it instead of transferring stuff to our vet. She hasn't lived long in the area she has been living in and wants a regular vet. But for now they will go to our vet and she's already called him about their past records since our vet gives us a paper at the end of each appt of what was done. I can just keep those until she takes the dogs back to her.If she ends up in an apartment we will most likely keep them. Neither are apartment dogs.

I turned a rotating fan on at the door of the root cellar so it had circulation.

The humidifier is running,kicked off during a power outage and I forget to turn it back on until I got a nose bleed.

We went back to Menards and got another 52 lbs of dog food as our dog has decided to eat it instead of his own and if the boxer eats our dog's food he will get the back door trots,which means I trot out that door with him as we don't trust him to NOT cruise right across the open fields around us. We have a person will to buy our other dog food off us as they use the same thing So that helps there.

AND as of today, I am short ONLY 3 things, (2 I have rain checks for from Krogers so if I don't find them cheaper I can at least buy them later.) on the stock up list.We removed apricots even though they are Hubby's favorite fruit we just can't handle the price I am finding. When they come in season next spring I will be buying them and canning them myself. I haven't been to Aldi's as tomorrow(Friday) we have a viewing to go to (Hubby's coworker grandpa) and decided since we drive within a mile of Aldi's we would just go then. No second trips to the same area as it's not where we go normally.

I need a few things (besides the turkeys) for our Tday dinner.Kind of holding off until the "guests" let me know what they are bringing.

Today I finished stocking the following:

I bought 2 turkeys (was the limit) for 57¢/lb. They were around 15 lbs. I am roasting them for OUR freezer and for soup and broth. I have a BIT...just a bit of freezer space for that plus that will be a few quick meals this coming weeks as next week asI will be prepping for our Tday dinner that is Sunday. I might get another one later but for now this will be good enough. That leaves the ham for our freezer but I have until Christmas to get those 2.

Bought 5 other items for presents(a real score as they were on clearance) but decided to wait to buy picture frames until after our Tday dinner.I think I'm short one gift but I know what it is and where to get it.

I bought 12 -2 liters of soda pop for our Tday dinner that was marked down to 88¢ and I had $1.50 off if I spent $10.00, getting the price down to 75.5¢ I have plenty of cups..like a black trash sack full as everyone and their brother seems to think we need to have their extra cups.I have been told that water at the hall is bad tasting so I will use my own to make coffee and have water for those that want to drink that. Not hard to refill water jugs with my own water.

My daughter lent me her buffet coffee maker for coffee. I have creamer and sugar and coffee.I will also take some tea bags for those that prefer tea. There will be ice so they can make cold tea if they want from hot tea.

The best news was I spent far less than what we budgeted for stocking up, Thanksgiving and Christmas.Which is good as we just got the $800 bill for getting the truck fuel lines fixed.

Posted by Chef Owings at 6:43 AM No comments: