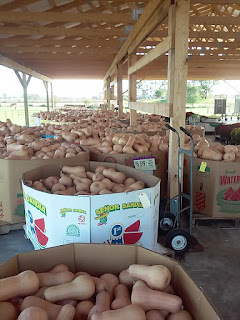 This is half the butternut squash that was at the Produce Auction. Since I don't need squash and there wasn't much of anything else in the amount I was will to buy I told Hubby I was getting some baked goods and we would get our apples else where. An elderly gentleman offered to sell me some of his apples that he had in the auction.Said it wasn't a problem at all for him. So I got 20 lbs of apples for 45¢/ lb. and baked goods at a good price so I won't be baking this week.

I started making the noodles for our Tday dinner (the Sunday before because so many of us work retail,food service, medical) It figured out to be 15¢ per person.

I bought a pork roast regularly $1.79/lb for 99¢/lb and ground pork regularly $2.99/lb on sale for 99 and more eggs for 79¢/ dozen. I was told that by the holidays get here eggs will be back up over $1.00/dozen. So I decided to dehydrate the amount I use in the holiday baking.

I dehydrated some pears and apples we weren't going to get used before they went bad.

We bought LED light bulbs. I've been saving as my son warned me they would cost a pretty penny, especially with the amount of lights we have here at the farm. We decided to replace the CFLs in the lights we use daily and go from there. Main amt of lights was 27. THEN we realized as we were changing them out we had forgot about ceiling lights through the entire house and 3 lights at the doors...that is 15.There is 24 in the out building that need changed. I suggested to Hubby we replace the rest in the house (which are CFL) and use them in the out buildings which is the old incandescent and then replace the outbuildings. That alone should save more money. We did save around 1/3rd the amt on the new bulbs by buying what was on sale (even though it was a less watt than we were using) so I was happy with that. I can take that savings and put it towards the next round of LED's we buy.

We got Subway one night we both of us was just too worn out and was thinking of just not eating.  We gave them our Subway card and told them to take what they could off it...we ate free.We were both shocked there was that many points on the card when we very seldom go to Subway unless we can get a special and have to eat out which isn't all that often.

With cold coming in, I have been closing the curtains as it's getting dark and waiting until the sun is out before opening them. I turn the furnace off  as long as the house holds at 68° during the time, when it drops to 67 I'll turn it back on.

I turned the dehumidifier off in the basement. By next month I will be turning on the humidifier on in the front room.

I'll be pricing 50lb bags of potatoes this week as there was none at the auction. I need it for us and some for the family (as early Christmas present) I will also be pricing beets, sweet potatoes and watching turkeys as I need to roast one early for the noodles since our dinner is the 20th.

Posted by Chef Owings at 3:19 PM No comments: