Why my pantry is full. 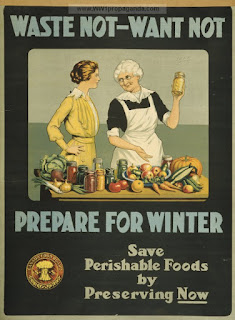 This what I have hanging in my kitchen. I've had it so many years that I can't remember who gave it to me and hadn't thought to write it on the back. It's just on regular printer paper and in a sheet protector. So if you gave it to me...thanks.

Waste not, want not.

Use it up,wear it out, make it do, or do without.

They weren't ready for hard times when the Great Depression hit. A lot of folks weren't living the good life anyways, dirt poor and poverty was already in the home.

I didn't live through those times but my parents did. I did live through my parents getting a divorce which meant Dad wasn't there to put the garden in or fish and hunt for meat for the table. Food took the hit and Mom and I went hungry more than once. reminded her of the times she went hungry during the Great Depression as a child. My brother moved back home and my Mom's youngest sister moved in for awhile also. Between the four of us we were able to get the garden planted and food back on the table. None of us fished or hunted...meat became a condiment instead of the main course.

Could I feed my family if something happened?

At home now there is  Hubby,myself and our 2 dogs. There have been many times I pulled from my pantry for others, including my children and grandchildren. I now share my bounty with my Dad on a regular bases. Not that he can't afford food but being alone and in his late 80s he gets tired of cooking for one and eating his own leftovers. I wouldn't have it any other way and Hubby is fine with it.

There was a time Hubby's work went down to 3 days a week after decades of overtime and even years he had to take vacation to not work 7 days a week all the time....we weren't prepared and lost everything. The only thing that was "okay" was I had enough food to feed us for 6 mos. My fear was the food would run out before the garden was producing again or worse that the garden wouldn't produce enough like now when I watch over half of the crops rot before they are even ripe.

My "win" against this nightmare is to keep a good pantry when I was in my 20s and 30s this was this list...

Veggies were in season or what ever canned was on sale.It took 2 cans to feed us when it was 4 of us. I bought one #10 can of Veg-all (think restaurant size) every other month for veggie soup.

Fruit was what ever was in season or very very cheap. I didn't buy canned fruit or frozen fruit...way too expensive.

Meat was bought on sale or from the clearance bin....I tried to get a chuck roast, a whole chicken and hamburger....sometimes a pork roast in the fall. I got pepperoni from the local deli because I could ask for a dollar's worth and have it sliced thin and have enough for 4-6 pizzas if I was careful about the amount I put on it.

Sometimes I bought bread that was discounted, most times I made my own.

Peanut butter and jelly were only when I had extra money.

No one went hungry and many times the kids friends were in to eat also...never planned just stopped in to play and ended up eating. I don't remember a time that I ever said they couldn't eat because there wasn't enough...I stretched it or added more bread to the table.

Even today, now pushing 60 , with just us and the dogs this is still my main pantry list. I have change a few things...there is always olive oil along with what ever oil I buy. I buy Wondra instant flour for my gravies and sauces.I buy white and yellow corn meal. I like white for corn bread and some breading and yellow for mush and some breading.I use lard,Crisco and oil. There is an assortment of dried beans ( I grow part of them) and rice (which I can't grow)I grow a lot of the herbs I use now including garlic. I grind my own cayenne peppers to mix with red bell peppers I grow for crushed red pepper. We grow popcorn. I make my tomato sauce from the tomatoes I grow. American cheese is few and far between as we use other sliced cheese that is on sale for cheaper now days. I usually buy a colby jack shredded mix for the Mexican dishes or salads or sandwiches along with the cheap pizza cheese.

I buy our fruit in case sales from a local butcher that has it once a year in the late summer. I have almost 1400 sq feet of garden that provides a lot of the food we eat for a year. I fill in with food bought from the Amish produce auction and the Amish family that sells their extra produce in town.

We buy meat on sale or clearance as Hubby doesn't hunt and drowns plastic worms when he fishes.

Still this past two years I have watched the grocery budget spiral out of control...so it's back to the basics and that's the focus from here out.

Next post...making it last longer