Working in the pantry 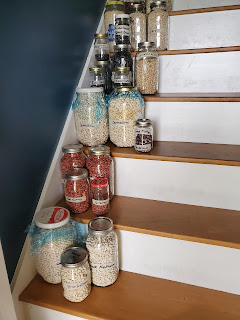 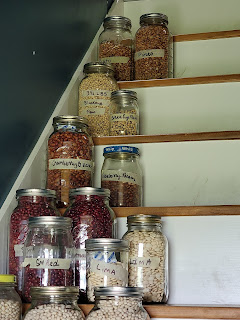 I changed out some of the jars that I could use in canning and used Daddy's old jars in their place. I know when the harvest comes in I will most likely need a few small jars.  I put the beans in the north/south staircase to go upstairs. Hubby decided he liked them just like that as he could see which one he was looking for.
He went to an Amish auction today as there was a couple things listed to be sold at that auction we have been looking for. He knows what they sell for new. The auction he was at on Wednesday was extremely on the high side when it came for what it sold for. UPDATE.  Was there from 8:30 to 4:30 and only got what E was looking for. Everything we wanted was going too high almost new prices.
As I was getting the mild salsa made to can, he asked if I knew how many loads I had to can to have the pantry were we wanted it. AND how much was water bath canner vs pressure canner.
Water bath canner 28 loads (7 jars/load)
Pressure canner 65 loads (7 jars/load)
93 loads.... about 14 weeks as I don't can on Sundays usually. At least one load a day puts me at the middle of November to finish the canning... last year it was in December and it was tomatoes from N's hoop house.
END OF DAY... We harvest Italian green beans so I might have a quart of those. Cherry tomatoes that some will be dehydrated.. A couple regular tomatoes. A half a cup of strawberries, 3 watermelon and 2 muskmelons.
I canned 14 pints of mild salsa (finished salsa) and 16 quarts and 1 pint of pasta sauce. With the 16 quarts and 1 pint I already have  the total comes to 32 ... 33 quarts as the two pints would be used together. I decided to make tomato juice that I will be out of when I make the next batch of veggie soup before I make any more pasta sauce. We can always go to every other week instead of every week for pasta sauce.
Have a great weekend everyone
Blessed Be
Posted by Chef Owings at 6:16 PM 3 comments: