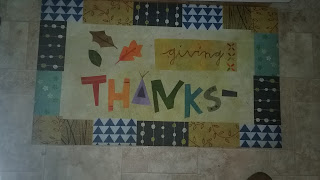 Menard's had their 11 % rebate sale still going on so we replaced the bad turkey fryers that went out while I was using them canning. Hubby bought 1 new fryer (not the pot part just the burner and stand) and one burner saving over $60 of buying 2 new ones.Which was good as I canned over 20 pts of caponata in one day. We got 40 lbs of dog food bringing us up to 80 lbs so that should take us through 4 months with just Rascal. I bought 2 new throw rugs for less than $4 each, a rubber one (think front door rug) to go on the metal trunk at the end of our bed so Rascal's nails don't scratch it and it stays in place and one for in front of the stove(the picture) as that one was sliding on me and that's an accident waiting to happen... I have accidents every day don't need to "plan" for one.

Caponata: eggplant, onions and tomatoes and in this case bell peppers because I still had 6 left after canning and didn't want to see them any more LOL. 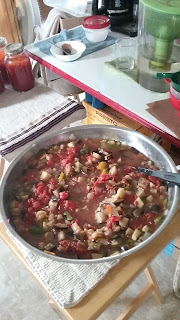 I sorted through my bag of chef potatoes (baking potatoes) and they are in the root cellar.I still have 50 lbs to dehydrate for mashed potatoes though a few of them might go in storage.

I rewrote the stock up list as I can't trust my brain and more than I can my body, as once again I fell and hit my arm that I had surgery on...GRRR. 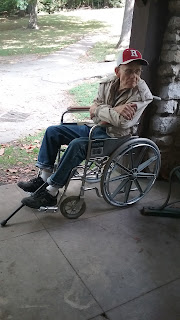 Daddy's first ride in his Goodwill wheelchair fixed by my sister in law.Daddy was smiling all the way up the hill as Hubby pushed him up, said he enjoyed the ride back down as Hubby took him down backwards since it was so steep. Grandson(14 yr old...Daddy's great grandson) asked if he could sit on his lap for a ride. Daddy told him no...then waited a beat and said he would sit on the grandson's lap instead and it was okay if he popped a wheelie....as daughter told everyone the boys had found an old wheelchair in the barn and they cleaned it up and brought it in a pop wheelies through the house with it.

I made brownies with mini choc chips and carrot cake (cut the raisins up as Daddy can't eat whole raisins) for the family reunion from the pantry. My older daughter let me know while in route she forgot to get the veggie tray and since we were going to be there early could we stop and get something and she could pay us back. She told us what she was going to pay. We stopped and got a veggie tray, a fruit tray and a  dozen of assorted muffins and still was less than what she would have paid. PLUS she told us to bring the leftovers home.

Since we both forgot to grab some chicken that my brother brought to the reunion to bring home for dinner we snacked on the veggie and fruit trays along with what was left of the brownies and carrot cake (grandsons didn't realize  they left it or we wouldn't have had it to bring home) Hubby had a lunch meat wrap to go with is even though he was not feeling good all day. Woke with no voice and a nasty sore throat Sunday and today.

On the way back home from the reunion, we realized the route we take to the Amish auction (this coming Friday)was going to have a detour that day which also meant we couldn't get to the 2 places that was on our list with the towing the trailer to pick up winter food from so today I went over and got what I could. Winter sq isn't coming in for them very well but I got 4 squashes when I wanted 12. Might be going without if I don't find more. I did well at the Amish country store, even though I didn't get the paprika or cayenne like I wanted because of the price.I will see if I can find fresh cayenne that I can dry and grind myself.They were out of paprika so I will have to get it else where as I make other spice blends with it. By going today we can go another way to the auction and not add 60 miles detour to get to the other places while hauling a trailer which cuts the gas mileage in half as it is.

Hubby woke me up coughing through the night and when I did get up this morning he couldn't hardly talk so I called and got him in to the ENT doc which Hubby was NOT happy with me for doing...good thing I did as he has an infection and it was triggering his GERD to the point it was going to be doing DAMAGE... he is on meds for the infection and will have his primary deal with allergy meds to take in the spring and fall for now on. OTC just doesn't work for him it seems.

This week is suppose to be mid 80s with rain... I put the flower pots out to get rained on. We had to turn the AC back on as it's is way to hot in here especially for Hubby without it. AC is set at 78 °.

We are ate out twice ( medical appts both times only 9 more to go and hopefully none will result in surgery),  got the cheapest meal (bfast)we could and used coupons and both times brought food home for another meal with only adding a veggie or fruit. I only bought milk and lettuce from the store for us for our weekly (well biweekly now). The rest is stock up only.Hubby told me he would rather see me spending the money to stock up on sale NOW rather than put the money in an account earning next to nothing in interest and then spending more for it AND paying for gas to go to town for it this winter. We have 3.75 mos. of our budget saved right now for this coming winter. Our goal is/was 4 mos as we know we will have money coming in with in 2 mos of his retirement of Dec 1st.It's just the time of the retirement being winter...higher utilities, more gas costs to drive to town due to having to warm up the truck and weight in the back of the truck, on top of the health ins costs.

In middle of writing this we lost the transformer in the back yard so everything shut down. Power surge caught it.BUT since it didn't make any sound ( they usually explode)I didn't realize it had blew. Everyone in neighborhood was out. So Hubby cranked up the generator. Two hours later everyone had electric but us. Landlord  came down to see if there was something going on that Hubby was missing and found the insulator laying in the yard, it was split in half. An hour later the repair truck was here and the transformer on the road blew as he was pulling up. He shut down the electric and within 30 mins had everything fixed (thanks (NOT) to now dead squirrel) .Waited to make sure we could turn lights on in the house before leaving.  I can say we can handle being without electric for about 24 hours before we would need to go get gas. We can get gas from the neighbor that is 1/2 mile from us. Their generator is propane ran and they have gas tanks due to their business. The propane tank for the grill is full and there is backup if needed.

Hubby took another night of work off due to still being sick. I had my MRI for my other shoulder this morning so we got all our prescriptions while in town.We also swung by the chiropractor to see if he could squeeze us in since we were in town instead of us coming back in 2 hrs later. Worked better for the doctor also as he had no one this morning and was back to back with clients later.

I washed foil and box inserts and hung them on the drying rack to dry. I hung a load of laundry I washed in cold tap water and homemade laundry soap (I use vinegar for softener). I added water to shampoo and conditioner. I saved veggie peels in freezer to make veggie stock later. I save meat grease for later also. I am collecting scarlet runner beans as they dry to replant next year. I get one bean about every other week.The birds pretty much munched down on the blooms and the mole did a really good job of messing up all the flowers and those beans in that sq ft garden.

Bought myself 2 pairs of jeans (first in 10 yrs if not longer) that was marked down 30% and bras (sorry to the  guys). Nothing is fitting right and beyond my sewing talents or it's so worn out it's not worth wearing any more...and believe me I have clothes I bought and wore regular since 2005, my jeans I've been wearing is my youngest daughter's and she bought them in 2001) I might cry when I have to give up my one skort that I bought in Philly PA in 2005 at an USPCA convention. I have taken it in more than once as I now weigh close to 25 lbs less.I found socks that fit with a rebate so I am set for winter mostly... I think I'm set but I haven't put all the warm weather stuff away and put the cold weather stuff out completely. Hubby thinks jeans is all he needs and only a few pairs for wearing for good. He has to try on his dress pants also.

Electric bill dropped 20 % since I went to doing the canning outside and not heating up the house or using the electric stove as much as I do use the pressure canner on the kitchen stove.

We checked our board games and puzzles for something to do this winter when Hubby first retires. He would like a few new board games and puzzles so I will be checking the yards sales in 2 wks. I have made a yard sale list...I am hoping to find winter curtains (need 8 sets) along with bookshelves  and maybe ...a desk. Son is going to check the Goodwill he bought his desk at to see if they have anything. Manual can opener, my spare is getting in bad shape.

I called the wellness center to see how it was going about starting my rehab there ... The lady doing it finally got the release she needed and is working out a program for me. I had glenoid labrum tear with SLAP lesion along with bone spurs, bursitis and tendonitis along with the bicep tendon having a hole in it. I am still struggling to put my arm/hand behind me.

Our son got us a hall for Tday dinner to get it out of everyone's house.At first he hated the thought when I asked him to rent it and I was paying for it until he saw the costs of us transporting everything including the gas and renting tables etc and realized we would be saving over half the costs we have spent.PLUS I made it clear it was a potluck meal this yr. so it's not us providing all the food.

Can't really remember much else that I haven't posted on Thursday...

Blessed be
Posted by Chef Owings at 1:03 PM 1 comment: