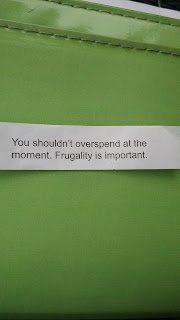 My fortune out of my fortune cookie. I thought it was a good poke as I found it in the car when we went to town. We went to the local Hong Kong Buffet for Chinese New Year on Saturday. I had coupons and shared them with the others that went with us and the table behind me since they had children under 7 and we don't. Everyone else went shopping , we went home.

I grieved for Ree at Thepioneerwoman as they lost their nephew and their oldest dog with in days of each other this past week or so.

I made Brandy's Swiss Chard soup from ThePrudentHomemaker. Reread all the posts under last week's frugal post from Brandy. Reread eating from the pantry and saving.

Bought the Oliso Iron after reading the review at Steamykitchen by Jaden. Been putting that off because I wanted a heavy iron and wasn't finding any in the stores and really hate ordering something that I can't touch even though I know I can return it. This one does what I want it to the first time.

I found a recipe for Kale and Farrow(when I get some of that ) and info on making complete proteins while eating meatless from Terri  at Bluehousejournal.

I found a recipe for slow cooker ham and potatoes from Katie at goodlifeeats.

The soup recipes will be going into my rotation of soups I am now making at least once a week if not  more often.

I put Dave Ramsey Debt Snowball method in effect the beginning of Jan. That is doing  well. I also listed the savings as a bill and set it to automatic. THEN without telling Hubby as he has a the tendency to start shopping when I am trying to save. He used to farm and is very used to always living in debt and living on loans. NOT living that way is a struggle for him. I transfer any money not needed at the end of the month to the savings.

My mother in law told me they saved five dollar bills and that's what she used to buy the house when they retired from farming.She saved 20 yrs. When she started she thought it would help make a down payment at the end of each month she deposited the fives. Then after a year she decide any five, whether it was 5 ones of a 5 dollar bill. SO I am doing 5 ones and 5 dollar bills.In my savings.

Prepped veggies at the beginning of the week part of the Revive course that I took from Jessica at lifeasmom. OVER prepped so I cooked what was going to end of being pitched if I didn't and split it between the turkey(leftover turkey from another meal) to make 2 burritos for our lunches and the rest of the turkey and some of the veggies went into making last night's turkey and dumplings. I have a container of the veggies to go in the pasta or calzones tonight and the rest of the veggies got dumped into what was left of the mashed potatoes that was leftover that I made mashed potato patties.Had mashed potato mixture left so mixed that the veggies and froze it to reheat as a side or add milk/broth/water to for soup for myself. I can also take a container to Dad and he can reheat it for a side or soup...just thought if I added cheese and some meat it would be loaded mashed potatoes. LUNCH. LOL

I had tossed the bag the chicken came into the kitchen trash and the next day Hubby had to take it out because of the smell...felt it was a waste as the bag wasn't really full and the trash goes to the road on Monday mornings. He tossed some of the burn trash (we have open burn here and use a burn barrel. We don't put anything in it we wouldn't put in our gardens as the ashes either go in our gardens or in our landlord's fields). I told him for now on I would either do the chicken on Sunday or put the "trash" from it in a bag and in the frig or freezer.Not wasting another kitchen trash bag.