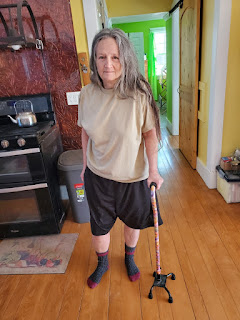 The physical therapy hurts worse than the reason I had the surgery or even the surgery. Recovering well from surgery, they said that I tested as if I was pushing 4 weeks out instead of just 1... Cerebral Palsy is raging like a gas fueled bon fire. SO a lot of the therapy is for the cerebral palsy. They wanted me to stand feet together on a soft squishy mat with my eyes closed to balance... I looked the guy right in the eye and told him if he could justify when I would ever stand that way I would do so. He mentioned getting out of bed in middle of night and stepping on  dog bed. His dog bed is squishy LOL. I did it... didn't do well with my eyes closed but okay with them open. It is more of a test of a certain spine issue that affects balance... then I told him my L5 is a triangle, spine does a cork screw before a nice S curve. Not sure if he will have me practicing that again. I am walking without walker and part of the time without the cane. I did the bike thing. Best part as far as I was concerned was the leg massage, both legs.

Hubby is getting tired of running the house... He already is tired cooking which is really just reheating and he acknowledges it. Is tired of opening and closing curtains, doing laundry *I did suggest using the dryer* But he is hanging clothes to dry. He did say he was surprised when I was to test( advised by PT) going on our stairs that I took 4 steps and then came back up and said "same time next week". I was not stable enough to do that for sure. Tired of figuring out what to fix for meals (so I am making suggestions of 2 and letting him chose). He is tired of explaining to 1 certain person he will not be back to work until after March 6th. M came over to check if I needed anything (bread and pie tomorrow) and I asked her to mention to E that this one was calling daily. E let me know last night when he came over to check on me(hadn't seen the dogs out so was a bit worried if something was going on with the dogs) and he knew Hubby went to town for odds and ends, E had talked to the guy. Hubby mentioned today the guy had not called.

The driving me to PT and waiting isn't bothering him as much as that he does with work. He did say he got some of his paperwork caught up, redid some of his finances also and refigured what he was going to have to charge. He already has Tuesday and Friday morning lined up starting mid March (my pt is Tuesday and Friday afternoons)  He has Wed and Thursday line up also. Monday is a floater, there is a guy that sometimes needs to go get supplies and he tries for Monday since Hubby doesn't have much on that day. He is okay with morning or afternoons.

I went through the one file cabinet. It is now decluttered and organized. Tomorrow will be the next one.

I paid March bills that was in, made extra payment on the two loans on life ins and the mortgage.

I got the confirmation of getting SS on second Wed of the month starting next month just under $1000 after I had taxes taken out. I think that was the 3rd time I got the notice.

I ordered LL Bean boots, their gore tex boot on sale as I wore out 2 pairs of boots since moving here that actually costed more together than if I had just ordered the LL bean boots to begin with. I spent the money with what I know will hold up. I have ordered 2 pairs of crocs for the garden. I will need a new pair of muck boots as Hubby tried to repair mine and it won't stay fixed. E said they are just starting to come in to the TSC so I will have to go there to try them on.

Snow is melting and starting a muddy mess for the dogs to track in and out. Another frustration to Hubby.

Wilbur has taken to walking by my side, Rascal is now getting up on the bed and sleeping next to me. When Rascal sleeps on the bed Charlotte will sleep down on the end and leave my legs alone. She is a leg snuggler and been a battle for her and me. She has gotten so she lightly paws my leg and if I can adjust for her to lay down I do but if I can't a pull her to me to sleep tucked into me.

I told Hubby I need to draw my garden plans. April 2nd is the last spring date to plant peas. LOL

How is everyone and everything in your neck of the woods?