Hope you are doing well. 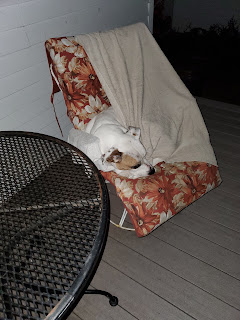 She woke both of us up itching at 4 A.M Monday morning.
Days are flying by....
Monday, Charlotte got her nails clipped and a different shot for her allergies. The vet had noted last year that the injection she got didn't do as well as hoped. We forked out the higher $ to get a different shot. She slept solid on the hour drive back home and then curled up on the same chair as pic and slept another 2 hrs. Came in, ate, went back out and played, KNOCKED ME ON MY BUTT AND INTO HALO BUSH, gave kisses to make up for it, came back in and slept from 8 pm until 5:30 this morning. Hubby said she woke him, went out to potty, came right back in and went back to bed.
I ordered some items on the stock list I keep on the frig going through The Prudent Homemaker's site at Amazon and used my cash back points to pay for it. We are now set for winter with filters.  I got popcorn and breath right strips also. There is enough points left to pay for my monthly kindle charge.
I ordered my FLYLADY calendar (2 ...one for household the other for pantry) through Amazon instead of Flylady.net. Saved $20 on shipping. I ordered File It calendar through Calendars.com that I use for finances. Keeps the bills together. Daddy and step mom and Mother and step dad used this type of calendars for the bills.
I baked bread (need to bake again) made wonton wrappers and some dumpling *pot sticker* wrappers for the freezer.
I refilled everything in the kitchen, started to reorganize it and found what I thought would work , made it worse so I will have to undo that this week.
I took stuff to the pantry, realized I didn't have a place for it so had to move stuff around.  I mylar bagged my corn meal , one bag for  2 lbs. and put it in a 5 gal. food grade bucket with gamma lid.
I put the odds and ends coming in from the gardens into a freezer bag I call the stir fry bag. I will use that for stir fry and 123 pasta. 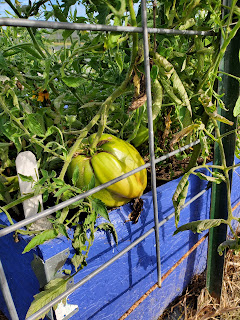 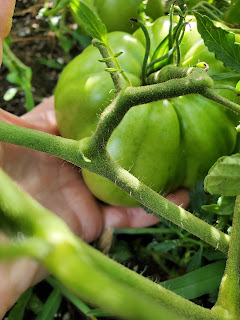 These are goat bag tomatoes. Very slow at ripening but when they are ready it won't take many to fill the jar.
We went to a friends' annual summer get together. I made almond flour pastry cups (friend has diabetes) filled with orange and red tomatoes and a pinch of cheese, I took a loaf of bread, and made pinwheels using cream cheese mixed with a pinch of garlic powder and small dices of cucumber and tortillas and  bowl of cherry tomatoes. All was in house so no buying anything. M gave me a crate of cucumbers that I canned but had a few left.
While at friends' get together, they were complaining of how high their electric bills was. Figured out that their electric price went up and they were talking about buying electric from one company and having the old company just transfer it. I pointed out that they would then have 2 bills and the old company would be charging distribution charges. That them might find that the distribution charges were what raised more than the actual kWh price.  When the husband sat down with me with his bill. I pointed out my house is twice what his is, my kWh is double what he is now paying with the increase.  That almost 2000 kWh   for that house was way higher than it should be. They said they had cut back on what they had one (just the two of them) and walked me through everywhere. I pointed out several things that was on and no one was using them. Phone chargers, tablet chargers, 2 tvs that no one was watching, desktop computer no one using, a laptop no one was using,  several garden water features, that wasn't where they would actually sit and enjoy them.... THEN their younger son walked through and pointed out that the garage fluorescent lights... all 6 of them was on and had been when he pulled in at 9 am. It was NOT dark in the garage. They have a pump on the swimming pool and the pump and heater on the hot tub. Their 2 sons started about they use the dryer for a iron. They use the oven to reheat leftovers instead of the microwave. .... We left, I figure the sons were going to finish back through the house as one is worried he is going to end up with them living with him as they run through money like tomorrow is never going to come.
I did a thank you from the sons and the Husband for sharing our electric bill. He realized that high of a bill is NOT normal and that he hadn't thought about split billing. His electric company told him this morning that the distribution charge would be the same and that was what had went up not the actual cost of electric and they warned everyone 3 months ahead of that bill. Guess they didn't bother to read insert or notice on internet bill.
Going to doctors this afternoon and then store to use Menards rebates.
Blessed Be
Prayers for peace
Posted by Chef Owings at 11:01 AM 2 comments: