a quiet morning after storms

after a night of storms and tornadoes going north of us ,it's a quiet morning. I have dragging butt syndrome with only 3 hrs of sleep while still coughing and hacking ...not as bad but still SIGH.

The yard is a soggy mess that I would have to wear muck boots to get the yard clothesline so laundry is on the kitchen porch clothesline. 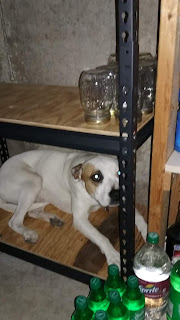 For the first time ever, Charlotte hid from the storms. It was the one that produced tornadoes so that's something for us to keep in mind when she heads to the basement. I am glad I had no glass jars on that shelf as it was,she moved a 5 gal bucket of rice to get back in there.

Usually it's Rascal trying to crawl under me and hide his face. 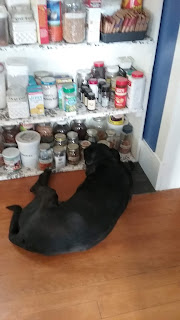 But instead he decided to hid his face in the dried fruit shelf. 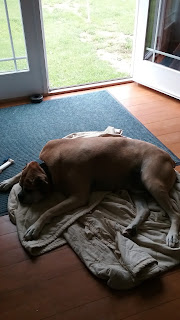 Wilbur has no care in the world no matter how bad it storms or how many guns are being shot ... we have a hunting club within a couple miles of us and they have skeet shooting around once a month. He can snooze through the whole thing.He didn't even look up when I closed the door during the first storm or opened it back up.Just kept snoring away like he had no cares.


I did go out and put the flowers back up first thing this morning that I had placed down so they could get a good drink of rain water last night. 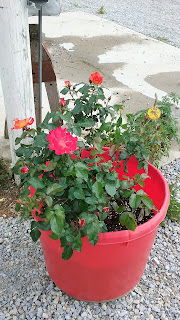 This is the rose bush my sister of my heart gave me. I didn't figure it would bloom any if at all when it being the first year it's planted.

Laundry is drying on the line so I can mark that off.

I won't be in the garden and I don't think it will dry out enough before Hubby gets home from fishing for me to get the rest of the garden in. I was hoping that I could get it done so it was just maintain after he got home.

I won't spray for the bugs/ants outside the house either.

I'll do the home blessing tomorrow so the house is nice and clean for him to come home to. Do the laundry of bedding and throw blankets also tomorrow, should be able to walk to the yard clothes line by then if we don't get any more rain.

Guess I will go play in the kitchen