SIGH at home again... going back to wearing make up

Saturday
I had to promise to not post anywhere any pictures of Son 2 before or after surgery. Except for a white pad as a mustache he didn't look any different that when he has a head cold. No bruising etc. Did very well... about 6 wks ahead of how I recovered... I didn't sleep well. Couldn't figure out why because I usually sleep very well at his house and then last night when Wilbur started snoring I realized I kept waking up and checking on Son 2 because he was NOT snoring. Which used to be a bad sign and I would get him to move. Doctor said he was maybe getting 50% of air through his nose the septum was so bad due to hand to hand combat it was broke two different directions. He said his cat wasn't smacking him either which Cuddles would do when he was asleep.AND Bailey was sleeping with him, she would leave when he started snoring.

SO I am home... laundry on the kitchen porch line. Hubby is running errands for neighbors as E is working maple trees and has over 1000 bags/taps to deal with. I'm dragging butt.

While we were talking last night I mentioned that March's pantry challenge it to eat from the freezer and asked which one he wanted us to start on. I bombed the efficient kitchen pantry challenge. I bought too much because I forgot that it was the 3rd week I would be gone not the 4th and I was battling feeling like crap the first 2 weeks.

This is the one he wants to start on. 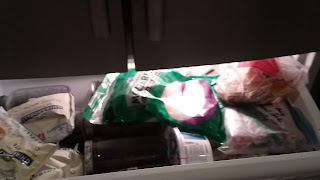 yeah, right... it is the one with the chocolate chips, cool whip,nuts and cheese.

SO he asked which one I wanted ... 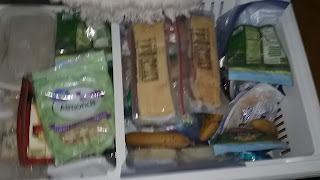 I can be a wise butt also... at least it has fruit, nuts and bacon and frozen hash browns.

Be nice if these were in the same frig but nope.

Sunday
Woke up with E knocking on the door, his dog Linda was over in the ditch barking and in pain... being Amish and Sunday he couldn't use his gun to put her down and didn't want to bash her head in with a shovel. Hubby dealt with her. She was not hit by a car, her tumor was twice the size it usually is and Hubby figures is was blocking her from using the bathroom like Rascal's would have if we hadn't had it removed. Since Linda had seen the vet and had this fatty tumor for 4 yrs... E didn't think of about it blocking her. ANYWAYS. She is over the rainbow bridge running around healthy and happy. While those in the neighborhood mourn for her.

We went and saw Daddy. The man has a H..L of a grip even in sleep. He woke up enough to take my hand and then went back to sleep. My hand aches today. He did wake up again and say bye.  I really liked how things were going there. They had him out in the community room and had the fire doors shut so no one could go roaming around,that keeps him out of trouble.

We went to Menards. We found we need 2 of the larger humidifiers to keep the house humidity where it should be. I now have Daddy's old one back in the hall where the bedroom, bath and laundry room is . New one (on sale) is in the front room and is a lot quieter than the old one so we don't have to blast the tv to hear over it. We also picked up 6 bottles of dishwasher soap and some cleaner for the copper kitchen sink. Both humidifiers take the same 2 filters and both use regular tap water.

On the way home Hubby asked me when I was going to order my make up/skin care... My dermatologist had already been on me. I've had friends and total strangers ask if someone hit me... I have dark spots that look like bruises. I just sighed. I was taught as a child to always wash my face with Noxzema not soap and to use a face cream twice a day. Mother used Pond's. I am allergic to it. I tried Avon... nope. I finally found Olay that  was good. I did every day "make up" of cleaning, moisturizing, perfume, mascara and lip balm. Mascara and lip balm to shut my 4 girls and Mother up and get off my back LOL. Out for work ... it was what I called the works.... notice I said what I called the works....

So Hubby said something to Son 2 and now I get a list of what I need, what to buy and the ORDER to apply it from Son 2's ex who used to sell make up and except for the eye liner and shadow never looked like she wore make up. But she did... Son 2 vouched as he watched her spend 15 mins doing her hair and make up every day before work. AND I NOW KNOW WHAT THE WORKS REALLY IS . GEEZE

Okay... I can do 15 mins on hair and make up IF it helps my old dried skin and stops people from asking me if I am being abused. I also am happy this young lady knows me and listed 3 routines... yes more expensive (and not what she sells) BUT acknowledges I AM OUTSIDE,I have allergies, I have dry skin, I have dark spots and wrinkles and I am 61 and I do not want to spend much time to deal with my face and I don't want to feel as it I am wearing a mask. While at it she told me what sun screen to get and to NOT MIX MAKE UP BRANDS. It can cause allergic reactions.  She also suggested to get bins or some kind of open containers that I keep it corralled in based on when I am using it.

I had switched from Olay when the price got too high for me to Neutrogena and found I liked it better also because it doesn't feel like I mudded my face.

I will see how this works for me when it comes in. She told me to "play" make up a couple weeks to what looks I like