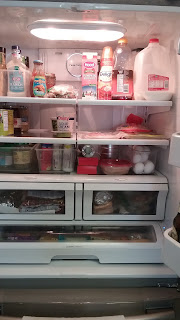 Tuesday I cleaned out the kitchen frig and organized it to suit the changes we decided to make in our diet. I gave our small grocery list to our Daughter to pick on her way home from work that night  as she was stopping to get herself some stuff...guess that was a REALLY frugal move because she FORGOT to get what I added to HER list. We still haven't went to the store. BUT we are now down to 1 pint of milk and 2 of us take milk in our coffee so either tomorrow or Monday I will be making the store run.

Wednesday and Thursday I inventoried the 80 % butler's pantry and all of the kitchen frig freezer. We ate from the pantry.

Friday I took down the Christmas stuff and dealt with that. Took ALL the empty canning jars and put them in the packing boxes we bought just for them. Hubby didn't realize I had that many empty. We ate leftovers

Saturday I sorted condensed some of the food stuff and washed about 2 more cases of canning jars and boxed them up. I made pasta with meat sauce and garlic cheddar biscuits. Since it was suppose to get really bad Hubby bought milk at the gas station since he was topping off the truck. Frugal because that is all we have bought , not frugal as it cost $4 for the gal. Daughter felt bad as it was on the list of the stuff she forgot.

Sunday we went to our landlord's 50th birthday party. Daughter decided to stay home, her OCD kicked in after 2 days of being at home and we came home to a clean house and laundry done but she forgot to fix supper(her night to cook so she ordered and paid for calzones from the local pizza joint. Since she had never ordered from there she didn't realize how big they were so we now have leftover calzones for another meal.

Today I had doctor appt about my shoulder/arm (the one they operated on) So Hubby drove and ran a couple errands he had while I was in the doctor...GOOD news is it is NOT the shoulder. Bad news it is my CP causing some issues with my bicep which already have tendonitis. I got a shot that should help in a couple of days when the freaking pain of having it injected into my shoulder joint wears off.
I fixed. SINCE I know how bad the pain is going to get with this shot I fixed one pot green beans potatoes and ham. White corn bread in a cast iron skillet, cherry pie and a box mix that I bought at Aldi's at Thanksgiving that was a brownie toppped by choc chip cookie dough.. between that and the leftover calzone we should be fed for a few days.
Posted by Chef Owings at 3:08 PM 3 comments: