We turned the furnace down twice when we left home for appts. Sunday we turned it off as it was warm and forgot to turn it back on before we went to sleep. I let Charlotte out at 1 am and realized it and turned it back on.

I opened the windows and increased the humidity in the house from 31% to 62%.

I ordered humidifier filters for next winter. They were on sale for 40% off. I have found if I get supplies AFTER season it's cheaper than BEFORE season.

The buzzards are back(geese came in early also) means it is spring here. It's a bit early. But since they are back and it was warm I went to clean up the gardens. North flower garden, north gardens with  100 ft asparagus patch, 6 strawberry beds and the blackberries, red raspberries and the honey raspberries rows, south garden beds including trimming all the herbs back and the flower hill at the mail box are done. Usually that takes 1 week if not more and recover of 7-10 days. Hubby spent $$ to buy me a Stihl pruner and clipper. I would replace it tomorrow if it broke. IT was that great. I had some soreness but pretty much the next day was FINE. I still have the lilies and mint at mudroom door and the lilac and Halo bush at the kitchen porch. Hubby said it was a frugal buy since he isn't dealing with me being down with recovering after cleaning up the gardens and him having to do the work instead.

I made taco seasoning , Cajun seasoning and seasoned salt.

We ate leftovers I had frozen from the freezers. The leftovers are now making leftovers as I am now tossing what ever is left in eggs (frittata), pasta, rice or in a tortilla wrap.

I ordered some spices I was low on thru Brandy (The Prudent Homemaker) at Amazon that was on sale (on my wish list) using my cash back to pay for it. I have found by putting what ever I want on the wish list and then only spending what my cash back is keeps me reined in.

No one was hurt, well, the wife sprang her ankle jumping over the fence to get her husband to tell him the barn was on fire.

N(E's brother and the man we bought this house from) lost the milk cow and 6 calves, the smoke got to them.

They lost 2 dozen chickens.  But got out their 5 horses. Buggies are usually in that barn but the wife had decided to clean all 3 buggies so they were up at the house. Hubby hauled the 5 horses to F's barn until the barn can be rebuilt Saturday night.

The fire marshal thinks that a bird took something in the barn that must have caught a spark from the chimney on the sugar shack (maple syrup shack). They know it didn't "blow in" even with the high winds we had as N had closed up all the doors on the side of the barn that was towards the sugar shack because he didn't want the smoke to go in the barn. 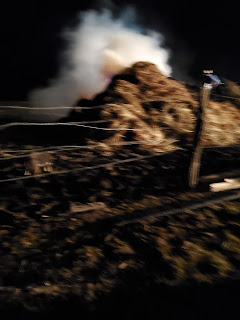 Over 10 ft tall of hay and straw, even wet it was smoldering. 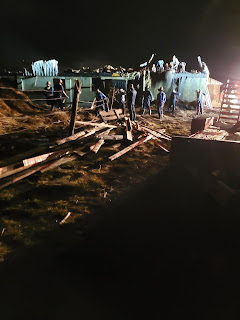 Trying to see if there was anything left useable. 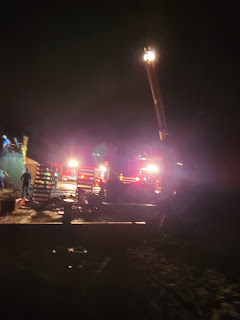 Light from fire truck so everyone could see. They still was there at midnight. Fire started at 3 pm. E said the hay/straw stack got spread out around 9 pm and they just kept spraying water on it as they knew higher winds were coming in the next morning around 3 am.

Fire department had to take water from the pond 2 doors down from us. We offered our pond if they needed more.

E said they stood around (no work on Sundays) and decided what the battle plans were for rebuild . Eighty percent of the cement block foundation is useable.

SO today they have a group of Amish going to a woods that an Englisher offered if they could use any of the trees for lumber. They have to use their horses to pull it out of the woods after they cut it down. E got a line of someone that could haul the logs to N's and another of someone to haul 2 saw mills (just the saw and stand) to N's also. Hubby is on stand by after he gets his hauling job done today in case they need something else hauled. N is hoping to get at least 1 stall put in his other barn so he can have 1 horse for his buggy for his family other wise they are "car less" buggy less , stuck at home and have to walk miles for anything.