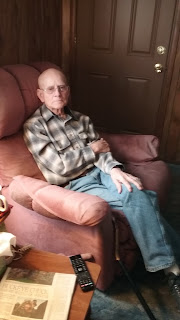 Okay it's my Dad. He will be 90 in May and when I go visit I always pick his brain for wisdom. He has "slight" dementia, actually, he thinks his memory is bad because he can't remember sometimes what he was looking for...We do that most days.

BUT when it comes to being frugal...there is NO memory problems what so ever  LOL.

I told him I had ate from the pantry all week, even made calzones. He asked if I baked my own breads...nope as we bought a lot of bread on sale for cheaper than I can make it and then I got the lecture about preservatives preserving my digestion system.

We talked about drinking water between drinking anything else and between bites of food (helps digestive system and him swallow, swallowing can be an issue as we age).

We talked about shopping at Aldi's (he gives a list to my niece that does all that type of thing for him as she's there and I'm not) Said his grocery budget went down by $25 a week because she buys nothing that isn't on the list. Even with him paying her, he is saving money so he thinks the clicklist at Kroger's is a good idea, better one if Aldi's was doing it.He( and my niece) has noticed that prices are higher at the beginning of the month and cheaper with more sales at the end of the month. So she does his non food and other items he gets from Walmart at the end of the month. We talked about what I had on my basic grocery list which he removed half  off the list. Said ...I would enjoy my food MORE if I ate in season for fresh produce...except for the mushrooms, he left the mushrooms on the list.

Carrots, celery, onions, white potatoes and sweet potatoes(only through late fall and winter for the sweet potatoes) and bananas and apples for the fruit. OH and the mushrooms. Right now cabbage is on his list.He might suck that one up as it's the base of the soup he makes every other week. Then he started about gardening. Not surprising as it's Feb.

We talked of planting early potatoes, mid-season potatoes and late potatoes. Late potatoes you can keep some back to replant. Early and mid-season not so much. We talked of heirloom seeds and what he would buy that wasn't heirloom.He still remembers helping his Dad gathering the tomato seeds from the bottom of the bucket for planting the next year. Growing transplants WITHOUT electric.

Starting the work in the gardens in early March as early potatoes, onions and turnips were going in Ides of March. Mid-season potatoes was 2 wks later and late season was mid-April.Granddad always was looking for any place he could put a spade in and turn the ground over to plant food.

I told him I bought the seeds for the next 2 yrs out of the money I saved from eating from the pantry. He said that's how it should be, anything to do with food including what I use to preserve it should come from the grocery budget. If I'm not growing enough (or buying it cheap enough like at the Amish produce sale) then I need to go without it. I told him I planned to do a covered garden for this coming winter. He said if he wasn't alive then he would be looking down watching me,probably wondering why I wanted to eat greens.I have been getting those statements for over 20 yrs..

I decided to not go to the store for perishables, got the milk at Menards when we were getting distilled water for the humidifier even though I paid 50 ¢ more than I would have at Aldi's which was just 1/2 mile away. It kept me away from the cube steak that has been calling my name for a week which I would have spent $10 on and I know that.

I bought a few more seeds that were discounted that I will use in the winter gardens only.

I started my second sweet potato for slips.

I made a list of what I need to plant in the garden and at what time. I need to list when to start transplants through the summer for the fall gardens. I still need to decide where to put what. Dad vetoed where I was putting the potatoes LOL.

Hubby uses his gas card to get 3¢ off a gal of gas. I use my Kroger pts.

I submitted my coke pts (which is ending in March ;( !  ) I'll probably donate the pts to USO as they no longer have what I always as a reward got available any more.

I stopped using plastic bags for things that go in my frig and used containers like the bacon I fried that I got free from Krogers.

I open curtains (and inside doors ) to let sun in,

I saved the grease from the sausage I fried for calzones and made sausage gravy for our dinner.

We turn the lights off when there is enough sun out.Hubby is bad about turning on lights and leaving them on. After 20 yrs he is now turning off the lights and opening the curtains .

I forced paper whites and put them in dirt so I can transplant them for next yr.

I did the mending.

I started cutting cardboard we had saved to use in the craft/sewing room for some of the fabric.I am peeling the "part" off that has writing on some of it.

We both did required things so our health ins won't cost us as much next year when we switch to the HSA.

I decluttered the office supplies and realized we didn't need anything except for printer ink next month.

I decluttered the bathroom and realized I was out of some things...completely OUT so that's on the buy list now.

Our youngest moved and gave us back some planter pots and a picnic table. The older daughter gave us a swing frame so I just need to get a swing for it instead of the whole thing. Mine broke and it's beyond being fixed

Hope I do better at being frugal this week