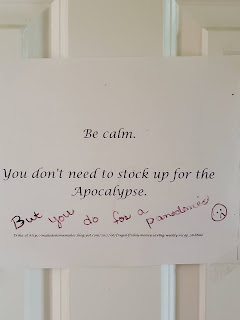 This is from Erika at Makedohomemaker.blogspot.com  (2017)

I added to it when the pandemic hit.

Hubby pointed at it yesterday and said he wanted to add to it.

I asked what he wanted to add.

His respondence was "living on social security only"

He has decided with out any decision that he wants us to live on social security only for 1 yr to see how hard it would be. Since he has the biggest income with his IRA, he can make the choice. It took me 2 seconds to tell him we would be short what I pull from Daddy's IRA. BUT pointed out how tight the budget would be, there would be NO extra paid on mortgage or projects done that we had to buy something or hire it done. No helping kids or his parents.  We could do birthdays but Christmas would not be covered in that budget.

He said work it out

Okay, I went on computer and changed the budget and showed him how it would have to be. I pointed out the following which is where we usually have disagreements.

I did bring up restocking. He wants to not restock until next fall but agreed to restocking with sales and then agreed to a certain amount set back as we both know it can take a bit of time to get cash from an IRA if you don't have it set up.

Propane. I prefer 68 to 70 for heat . He prefers 72 to 74 (worked over 30 yrs at furnaces in factory). I told him heavier shirts, slippers on his feet instead of just socks and use a blanket when he is sitting.  We decided on 70.

Electric. I will run the furnace fan full time (we already know that helps with cold spots) BUT I brought up he doesn't need to leave a light on by his chair and two at the desk in the front room. He doesn't need to leave his laptop on all the time and he doesn't need to put the tv on sleep for 60 minutes when he goes to sleep in 30. I really wished he would just turn it off but he is has had this habit since he was 16 and had rheumatic fever. He needs He added he quit plugging in his LED candle in the wheelchair bathroom as he found if he left the curtain cracked he could see well enough through the night with our security light.  I will not turn on my bedroom light  by the bed until I go to bed. Habit of turning it on when I close curtains so when I go to bed I don't step on Rascal who is BLACK. Means I have to walk around the bed 3 times dealing with lights, I laughed and said more steps for my Fitbit (which is under medical budget as it lets me know when my heart is racing). He suggested I use the bathroom candle he isn't using. He has adapted to less AC (since we only turn it on when Wilbur was panting, we will do the same for Rascal gets to that age ).

We by passed any bill that is set or already to the lowest we can.

Christmas is based on what ever we can afford.

Food processing this budget is at ZERO. I have plenty of canning jars (HA HA), vacuum bags, freezer bags, foil, saran wrap, press and seal wrap etc to go 2 years if I can careful.

Garden costs is set at $20/month. I need a little bit of soil for some of the boxes , I  and 1 type of tomato seed.

Home maintenance is  $20/month. I usually use Menards rebates to refill this except for the frig filter. I buy it by every other year. We won't have much in rebates since we are not doing any projects that we don't have materials already.

Cleaning items is $20/month. The only thing I don't have a year's worth is for the dishwasher soap. Well I might if I am the one putting the soap in. Hubby follows the directions. I use about half of that.

Personal. $10/month. I really couldn't think, we both checked, of anything we needed but felt something might pop up so it's in there.

Paper goods $5/month. Another one I don't see needing for awhile and can wait for sales

Eating out .... I said $40, that's one sit down meal at our local restuarant or take out Chinese. He said $120. We agreed at $80. But that doesn't include birthday or anniversary.

Groceries ... I had cut it to $200, now I have it at $150. I did ask M and B(E's mom) what they spend at the store and how often. Both buy lemon lime soda(7 up for B as her hubby won't drink anything else) . Both said around $70  to $100 if there is non food products. They both said twice a month. Once themselves (usually their hubbys) and once with an Englisher going to Aldi's that is not in this area.  I am really stocked well now except for ham. Hubby thought another turkey( I have a 20lb one in freezer) and 3 hams for stocking. SO it's up for debate.

According to USDA thrifty plan we should be spending $426.70 on food (not junk food or non food products) a month. I can say my in laws spend that much but I see a lot of snack foods that neither of them should be eating due to diabetes and weight issues. I know where Hubby got his snacking from. As a kid they had a snack bowl(5 qrt bowl) that they munched through twice a day. I was told to get a drink of water.

We will see how this goes. Hubby wanted to start it NOW but I pointed out we had to pay J for the two porches, an exhaust system for Son 2 (Hubby told him he could make payments), Daughter 4's last payment. PLUS he wanted to add 3 hams and another turkey and he is not fooling me, he will order a prime rib for Christmas eve.  I got him talked into starting Dec except for groceries.