Head construction company guy *head contractor* told me end of May the house would be finished... The he got informed by the carpenter that wasn't going to happen and the carpenter had him come down and see why not...

I am glad I wasn't there when the butt kicking started.

Last week I let Head contractor know that once again the same crew that he kicked butt was not showing up and it was really causing problems and SLOWING down the drywall crew. 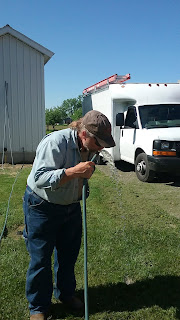 Yeah Hubby is drinking from an old garden hose. Then I did... didn't even taste like garden hose and oh yeah we both know that taste. 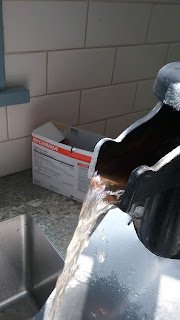 and then we got the hand pump to the cistern working, not tasting that water...will need to have cistern pumped out and clean and rain spouting that doesn't let the birds play in it before we use it. 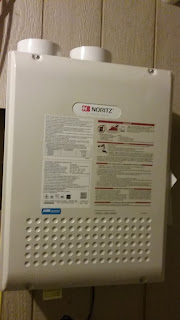 hot water heater is on wall, not fully installed as it is gas. There is also the plumbing for the regular bathroom and tub/shower combo frame in started... 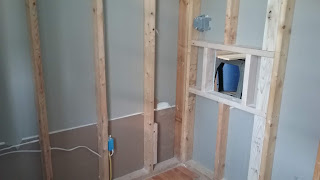 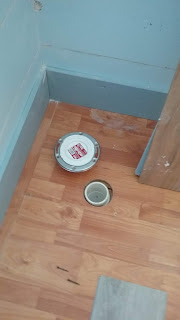 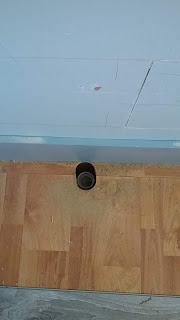 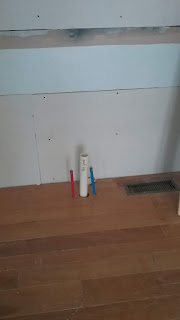 My kitchen sink drain and plumbing. While Carpenter was waiting for this stuff to be done... he walked around and was checking the work that had been done and found these 2 sections of roof that was missed (including by us) and let the company know to send the roofers back. 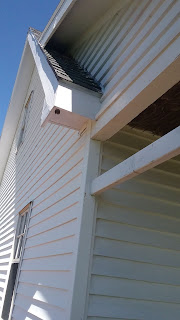 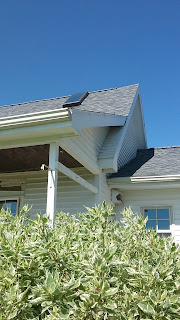 Then he started installing the storm doors. He got 2 out of the 3 done. 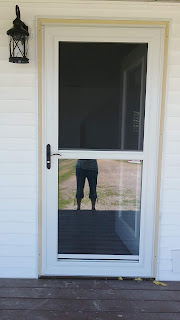 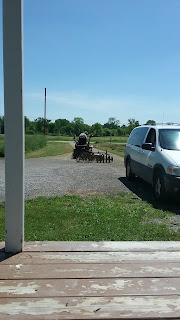 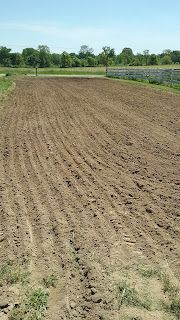 This has the strawberries ...you can barely see the edge of them in the upper left had corner...this garden is 120 ft long and 40 ft wide... We will be cutting it back to 80 ft long and 40 ft wide.  I would like to move the rhubarb into this area also instead of the middle of the yard. The other side where the asparagus is is 100 ft by 50 ft. We will be turning this to grass except where the asparagus is. Too many tree roots in the dirt.

Hubby was there this mowing while waiting for the truck to deliver the deck stuff we ordered. Said he got it pretty much done, probably because he didn't have anyone stopping him to get answers LOL.

We have a big pow wow with the Head Contractor on Tuesday afternoon so I am hoping the work continues as it has the last 3 days.
Posted by Chef Owings at 12:54 PM No comments:

Hubby received an award from the OH EMS Star of Life for helping save a coworkers life last year. Coworker had a massive heart attack...everyone else that was helping work on the coworker said the only reason the guy lived and recovered (is back to work ) is because of Hubby aggressively using CPR until the squad got there with the automatic chest compression system. 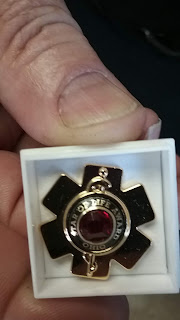 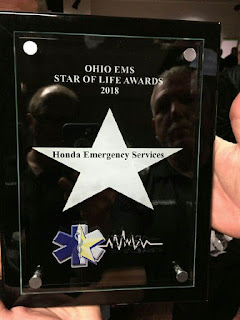 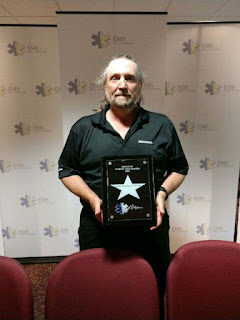 I am blessed by this man
Posted by Chef Owings at 11:30 AM No comments:

and then my computer crashed with Windows 10 update

The rule at this point is BEHIND... behind in 209, behind in housekeeping here, laundry here, meals, sleep...really sleep  as they brought pigs in and the dogs are jumping and barking when they hear the noises the pigs make and then Wilbur thinks he must charge the pigs and try to dominate them (the pigs are behind a fence he can not get through but he could get his nose bit off when he sticks it through the fence). SO Wilbur was on a shock collar... that died and now on a leash when he proceeded to knock me off my feet and bash my head into the door jamb because he tried to run to get to the pigs. At least I got to him before he could charge the pigs again. Looking to buy a new shock collar... maybe something for the massive headache I got but no concession or whip last.

Windows 10 update and wiped out my computer including it's memory...Lucky I had posted Dad's 91st birthday picture here or I wouldn't have it. I usually back up once a month, got side tracked with everything. Friend that does a lot of computer work told me to back up on thumb drive every day and on external hard drive once a month.

Computer guy can reinstall original Windows(Windows 8) but I would have to buy Windows 10 ... I'll take the freebie and use that computer for other things.

Bought a computer (http://theprudenthomemaker.com/ bought this and thought it was good).Used some Amazon credits to pay for it.

Everything was running behind due to a contractor on over load without enough man power to handle all the work he agreed to... Several powwows later and a big shove from the carpenter/drywaller/clean up with mess the other left behind guys ...things started rolling again... 209 update on other post. AND both of us are having to drive as one of us needs to stay and lock up as we had someone casing the place and Charlotte is still being caged and can only "hold it" 6-8 hrs... we lean towards 6 because of her being hyper. With 2 hrs of being driving time that's only 4 hrs work time. Between the two of us we can get in 8 hrs. WHICH is more work time than the other contractors except our carpenter and his helper...

Hubby's truck is making a sound and we are hoping it's just dirt in the brakes.

I've still not go my garden stuff in as I get started and I get motioned to come make a decision. Hopefully by next Saturday that will be done. I have 18 tomato plants and some herbs left to plant.

I love to say we stayed frugal...the only frugal has been where we chose to eat with coupons, discounts and gift cards...except for the little grocery store near 209... Beef and noodles, mashed potatoes and roll for $6.99 that makes 2 meals is cheap.