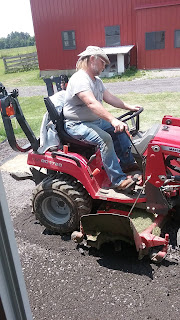 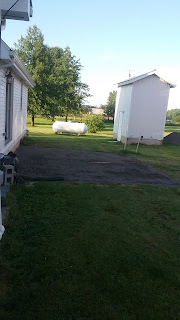 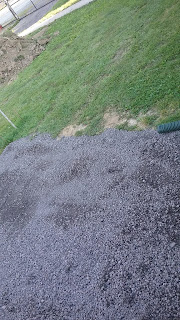 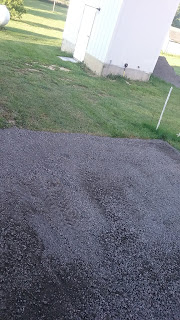 It will be 16 ft wide by 20 ft long. I'm going to have to put a blind in the bathroom as if you are standing on that end of the deck you will be looking in.

Hubby's not done list
dog house removed, mudroom gate on fence, spouting at the cubby hole, tower/antenna put up, fence line straightened and the smoker has not been put together.

We chose to not join Anytime fitness as they don't give discounts at the one that just opened. We will join the YMCA AFTER Hubby's parents join again as they do silver sneakers. At this time we are getting our work outs done in the yard and gardens and Hubby lifting concrete blocks with E and E's brother.

Speaking of gardens .... we went from flood to so dry the ground is cracking within days. Roots are shallow on all the plants due to flood so they are just dying now. I watered one time, but won't be doing much of it as we have 10,890 square feet of garden (1/4 acre) and 1 inch of water for that is 6,853 gallons. We have a well  so we are only paying for the electric to run the pump but with dry weather I don't want to drop our water level that much. We put in 3 square foot gardens and I planted 1 with fall beans. Mid week I will plant the next one with fall peas and the 3rd will be greens etc the following week or even closer to Aug.I have gotten 1 zucchini (yes only 1) and 1 yellow squash and 1 green onion. I should have leaf lettuce (it's in the shade during the heat of the day) and green onions today or tomorrow. BUT we do have this 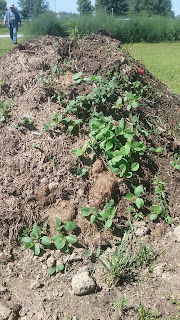 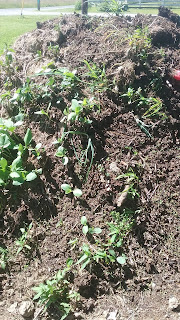 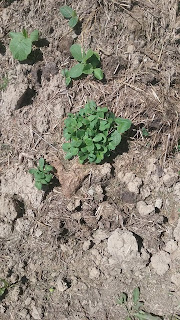 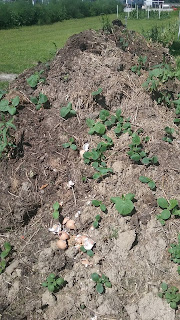 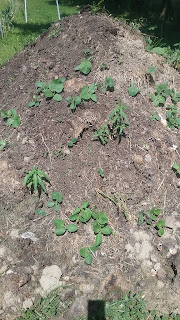 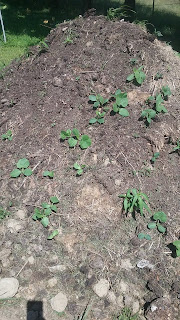 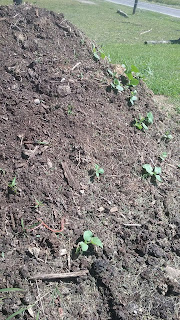 There is over 50 squash vines, potatoes and onions growing out of the compost pile so Hubby said we weren't using it due to it might be the only food we grow for the pantry. I don't know how onions got in my compost as I don't toss them there. I had 4-5 squashes that went bad in the spring, Delicata , kaboocha, jack be little pumpkin, pie pumpkin and maybe something else. Last fall we had  pumpkins in the compost from the Amish family that lived here LOL. Since I grow mostly heirloom they should produce the same.

With the heat on I've been cooking on the grill or air fryer. This was the last thing I cooked in the air fryer. Results, I need to pull food sooner. Wasn't over cooked and was very tender for flank steak. Used pesto, roasted red bell peppers slices and provolone cheese . 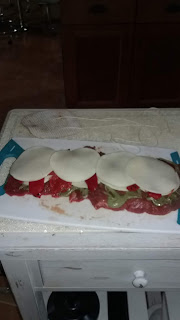 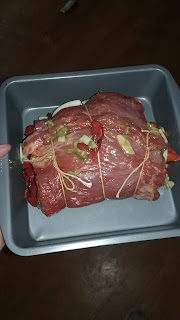 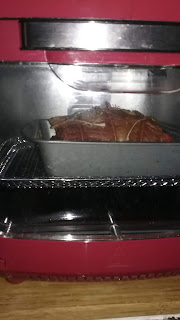 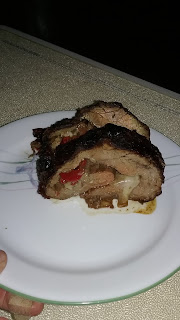 When this airfryer dies... I will buy another one just like it. I love being able to put a variety in and not wait for each to be done before starting the next.Hubby loves having onion rings that are crisp and not heating up the kitchen.

My June goals done
got well enough to start biologic.
I changed the kitchen to suit the changes in our eating and I now how the new frig set up 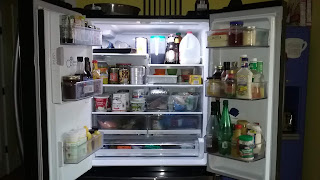 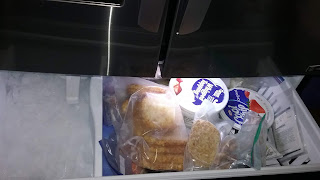 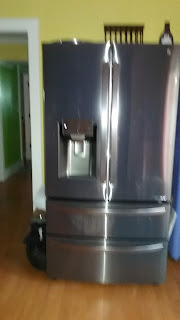 We like this, it's suppose to be black, the sides are but the front with the fingerprint less looks more like gray. Magnets won't stick to it either so I had to move the grocery list to the side.Negative is the ice maker is too small and I ended up with a bin in the freezer anyways which I was trying to get away from.I need to buy small condiments bottles to fit in the door.

I got the finances set for the new budget.

We had the energy audit. Should have the report this week as it's already a week late.

I did the test paint and it worked so our contractor now has a solution for the paint.

I cleaned 1/2 shelf of the pantry.

I DID NOT DO
computer desk as the old kitchen frig is now sitting there until Hubby has time to remove the cover to the basement ramp and move the old.

I didn't get the garden shed cleared as we still have some thing I need moved from the front of the barn.

I still  have 1 shelf left to clean in the pantry and I didn't get to the deep freezers thanks to having to shove the frozen stuff from the frig into them.

We got a total of 10 things done on the punch list of the house.
Posted by Chef Owings at 8:01 AM 3 comments: