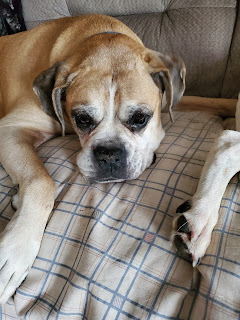 Vet said could be congestion heart failure or cancer or bronchitis... SO he is treating him for bronchitis and seeing if the meds work. He wasn't looking to have Wilbur go through all the testing at his age nor run up close over $1000 bill for us at his age that would have showed cancer or heart failure but the fact he got in and out of the truck on his own and actually dragged me in the vet's office (which he does NOT like to go to ) made us and Doc think bronchitis.

I took this when him and Charlotte (that's her foot at his face)were laying on the couch this morning. He still isn't eating dog food...lost 20 lbs., but that actually put him at the weight he should be for his size and age. But Vet wants him closer to 90-95 lbs.  He hasn't gotten sick but the only thing he has ate is his treats (which included his meds being used as one of his treats) and I got 1/3rd of a slice of crustless bread (Charlotte and Rascal got the crust sections) down him. Later I will try eggs, they are due for their eggs (helps with dry coats) anyways. He isn't snoring like he was and the cough is not as wet sounding.  He took his pill this morning without me faking him with a treat.

Vet said he should be closer to normal by late Thursday or Friday if it is bronchitis.