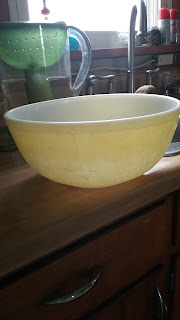 Do you have a certain bowl that when the family sees is they can tell you what is in it without looking?

This bowl used to belong to my late Husband's grandmother. After the rest of the family had went through and got what they wanted before the auction, we went through it for what he wanted. I asked for this bowl. He told me that that bowl had mashed potatoes in it during the cold months and either potato salad or macaroni salad during the warm months. SO that's what I put in it. My kids will also tell you that is held popcorn many times also.It was at one time the only large bowl I had. The kids keep trying to claim it.

This bowl doesn't see much action now days with just Hubby and me. I only make about 1/3rd of the potato salad and now pasta salad (Hubby prefers it) and less than that with mashed potatoes. Popcorn is only once in awhile since I have to watch corn products with my Crohn's. Even though it's not used regularly, it sits in the front of the cabinet with mixing bowls.

Why? Because it reminds me to be frugal in the kitchen. Grandma Cate grew all their food and took care of the farm animals while Grandpa ran the sawmill. If she didn't grow it, find it wild and can or dry it  they didn't have it to eat. They ate fresh in season, milk came from the cow in the barn, ham from the pig. She had chickens always and 2 turkeys that she raised for Thanksgiving and Christmas. I never got to meet her but I try to honor the lessons she passed to her grandson who is now with her.

Hubby and I spent his "shut down" working around the house and helping our youngest with her to do list at her house. Older daughter didn't have anything that needed done right now but will before winter hits so we postponed going to her house. Yard work caught up, all gardens weeded and planted , there is no room for anything else at this point.. I potted up 8 of the tomato plants and 2 dozen onions to give to youngest daughter as she is the only one gardening this year besides us. I found some strawberry plants that had came up in the old strawberry box so I transplanted them into the new beds. The old bed got killed off last winter and these just started up. We put the swing together and moved the set into the garage so we can sit and swing in the garage during the heat of the day when we are out in the back yard area.Moved the fire pit to the driveway. It's portable and kept blowing away in the other area of the yard , I can roll it in the garage during storms and it's not going to catch anything on fire in the driveway plus the garden hose is right there if needed.

Wikibuy cancelled my dehydrator order due to lack of supplies...so back to hunting for that.

Turned off AC when we were outside all day. I opened windows and doors every morning,open curtains in the morning, close the top of them in the afternoons to keep the sun out but breeze coming through the screens.Walked behind Hubby turning off lights and fans when he left the room. He got better by the end of the week of stopping before he left a room and checking to make sure he left nothing on. He called it practicing for retirement of not having me nagging him about it. It's funny because he used to get on the oldest about her leaving tvs and lights on in HER home 24/7 and then complain about her electric bill.

We went out once with our friends (coupon) and ordered calzones once (daily special).

We ate onions and lettuce from the gardens and I had mint tea from the garden.. Have blooms on tomato plants and some soon to be cherry tomatoes. Have an eggplant growing. Have spinach that will be ready this week. Have jalapeno peppers that I can pick today for our meal. Harvest spearmint and peppermint.Checked the garlic that is curing.

Moved dehydrator to garage. Usually in the summer I set it on the table on the front porch so it doesn't heat up the house but this summer the table is turned upside down every day to keep it from blowing away with the storms that are rolling through. So it went to the garage. The good side of that is Hubby cleaned half of one side of the garage so nothing would be around the dehydrator and in doing so found several things he thought he had lost. Lost it alright in his clutter of dump here and deal with it later.

I finished son's wardrobe and can take it to him on Thursday when we flip our truck for his car so we can go see Dad and take Dad out to eat. Dad can't get in and out of our truck. Son uses the truck to haul stuff he can't move in his car while he has it.

I finished getting the emergency supplies with a note to myself that we can eat everything in that area in December as I get fresh supplies in March.

I decluttered a couple boxes in the front room and put them in storage where they belong.

We used Speedway fuel card and Kroger points for gas.

I combined coupons and sales to stock up for this winter when we have no income and for items that I will need while down due to surgery.

I bought Hamburger Helper ...4 boxes (my coupon stated I had to have 4) that was on sale. I don't usually buy Hamburger Helper but Hubby used to when he was a single parent. So I got them for when he is cooking while I am down. We figure 8 wks of me not cooking at all. I can't lift my pots and pans with one hand (both shoulders need surgery, right one is the first one to operated on). I found hamburger on sale, I cooked 3 lbs and divided it in to 4 bags (yes I know that's less than a pound but Hubby who is a big meat eater doesn't realize it ), and labeled the bags for the Hamburger Helper and froze it. I will make some meatloaf in cupcake tins. prebake them and then freeze them also. I found pork loin on sale and then marked down, cut it in half for pork roasts as we have plenty of pork chops in the freezer. I can always use the meat slicer to cut it in to pork chops if needed. I found London Broil beef marked down, cut it in half and froze it. It can be London Broil or sliced on meat slicer for Philly steak or stirfries. I am trying to get 8 wks of meals that are just warm up or finish putting together.

I got several medical supplies, dish soap and body soap with coupons and on sale. I bought Olay bar soap, coupon and sale to make laundry soap. It seems to be the only soap both of us can stand the smell of .

We both are losing weight but decided (again) to postpone buying anything.

I watched fireworks twice from our front porch and Hubby worked the pit during the fireworks in town. We had brats and watermelon and potato salad on the 4th. We ate twice a day while he was off work and had a snack of ice cream that I had put between cookies and froze.I think I will put some in the freezer before surgery including some brownies.

We get the grocery ads on Tuesday in the mail. They go straight to the burn trash.

I decluttered the area that I store the bath/health products.

I took yarn that I already had from other projects to crochet a twin size afghan for my great grandson that I am now finishing up as his first birthday is right after my surgery.

I got frozen peas and frozen peas and carrots for 10 for $10 to finish the "stocking" of the freezers. If I don't freeze or can anything , we will be okay going through the winter until next garden season.We use one bag a month except in the spring when peas come on.

I transferred more savings to Ally bank and noticed we made more in the interest in one month than we did in 2 yrs together from our regular bank.

We carried individual thermos of water while out instead of buying water some where.

I've started a list of items we need from Menard's , we are waiting until the 11% rebate comes along. I still check Lowe's (no Home Depot around) to see what they are sale price is .