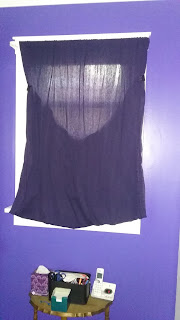 west side of dining room 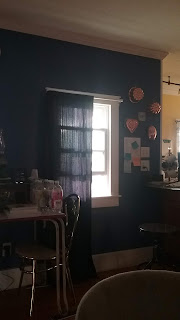 east side of dining room

New curtains for all 3 windows 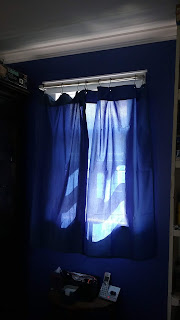 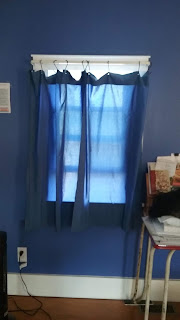 Old curtains in front room which are dark brown 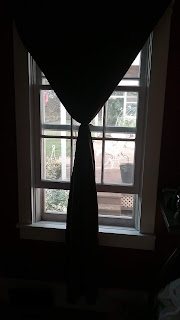 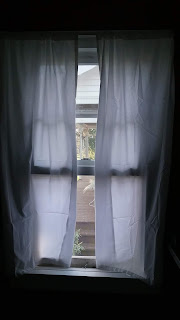 new curtains for 4 windows. You can't tell it but this room is the crimson red room 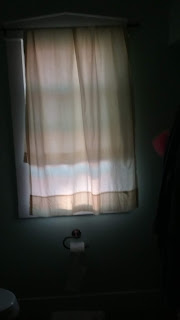 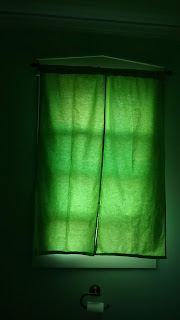 Old curtain for office with rolled up towel at bottom 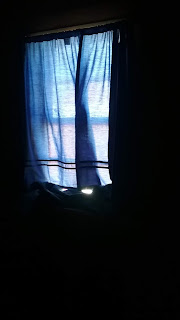 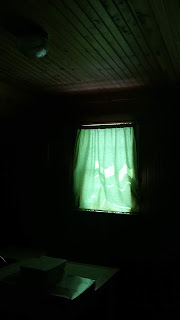 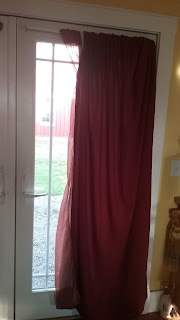 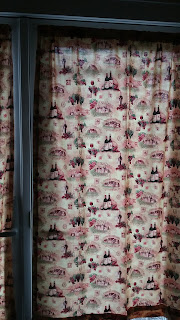 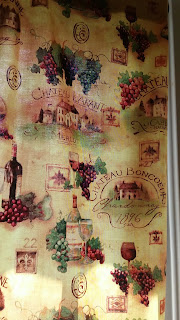 It looks close to the border I had in our kitchen when the kids were growing up...

But here it the DUH moment which is going to take a few hours to fix . I did tell the kids that it was so the dogs could lay and look out, which they do but that isn't what happened. I wrote the wrong measurement down 3 times. 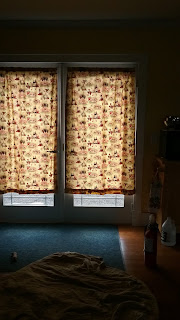 Thankfully I do have more of the material and will have the lovely task of matching the print so the new seam won't show as much as it could. I plan to add to the top after I pick out all the seams bottom and top...

ANYWAYS today is not a sewing day unless I get around to it. I have 6 cases of canning jars that need cleaned and new lids and rings put on them along with Son 2 trash can to bring back in and hose down as he washes it every week so it don't stink from used cat litter and I promised to do so also. I have paper work to catch up on that shouldn't be put off any longer.  I will do ironing and pinning for tomorrow's sewing tonight.

stop and see the beauty and count your blessings...
Posted by Chef Owings at 10:29 AM 2 comments:

Of course it was when it was FULL of water, just kept adding water and more water. I am so glad I do not run the clothes washer, dryer or dishwasher while gone. This was Saturday morning at 6 am as Hubby was getting ready to go away with a couple of friends for the morning. I waved him off, wrung out the curtains I was washing by hand and hung them out on the line to DRIP.

I looked at a couple places we buy from , one was have a good sale. Saturday afternoon we were in the store and the young man that asked if we needed any help mouth dropped when I said yes, washer died that morning, what did he have in stock that I could haul home NOW in the larger machines. HE did say he was sorry my day started like that as it set the tone of the day.He had 2 I could chose from, same price, same space, etc.... I took the one with the better reviews. 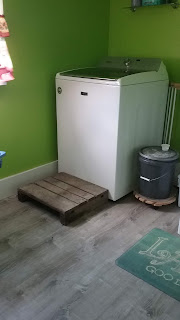 Thing of having a large washer (I was thick comforters and king size blankets monthly) is I am SHORT... Hubby made this step for me a long time ago. It's solid, big enough I can turn around and not fall off but small enough that it's not in HIS way . It holds a bigger load so less loads for me to wash. (SAVINGS THERE ) I didn't care about what features it had but can tell you the delay start is wonderful as I have the habit of putting the first load of the day in the washer the night. Now I can actually add the soap and set it to come on.The wash cycles are a bit longer than the old one but there is a timer so you can see how long it takes and how long is left to finish. Hubby likes it plays a little tune instead of buzzing when it's done.

Since I wasn't washing curtains, bedding and clothes Saturday morning. I worked on decluttering and organizing areas that are way past due. The north loft has a new (Daddy's old ) metal stand for stock up of cleaning supplies. The grow cart is put back together and the extra stuff for it is in the garden shed. I straightened up some of my baking supplies and realized I have some of the "lesser used" items on the low side.

While getting the washer I got some odds and ends that was on the buy list AND I insisted we get a new microwave. The old one floats how much it heats. I've boiled room temp coffee in 30 seconds and other times it takes it 2 min to heat up.

Electrician is going to install whole house surge protector. Just told us to order it and when he is down to work on the drain to the wheel chair shower and a torn heat duct, he will install it also.

We ate from the pantry. Daughter 2 was suppose to come up to visit with her son 4 , that got changed due to her job an hour before they left to come up so I was glad I didn't fix anything extra for them besides the lemonade.

Since I have nothing that I have to be back for I will finish the next 2 weeks at Son 2 cat sitting until he is home. Nice to not have that 3 hr round trip or spend the money on gas. I did bring a few more things from the pantry to help with the costs of food . I did coupons with the local store sales and got a third off the grocery bill for the fresh produce and dairy.

Hubby did his laundry while I was gone. E stopped over while I was harvesting the last of the gourmet potatoes (grown in grow bags , about 125 lbs total, one of the few things that grew)  and let me know the talk of the area was Hubby hanging clothes on the clothes line while I was gone. Amish men will do laundry and will hang clothes ENGLISHERS are not know for it. One English neighbor had his wife pointing out that Hubby not only washed his clothes but put them on the line and all she was asking was him to wash his clothes and use the dryer.  😊. Guess Hubby took a picture of our wringer washer and took it over the gentleman. NO Hubby has not used my wringer washer. LOL

I pulled the shallots, didn't get very big but they did grow. I also got a couple onions, not very big also. They are curing where the garlic was which is now cured and ready to be prepared for storage.

I got 3 zucchini not very big but made 6 cups of shredded zucchini for the freezer and a bit to toss in Hubby's hamburger helper he fixed for his meals of the day. Was a couple of small jalapenos that he chopped up and added to it also.

The local farm that sells fresh veggies that they grow for their income are buying from the produce auction. Their farm didn't do well.

Hubby was offered a permanent job at the produce auction. Two days a week, Tuesday afternoon and Friday afternoon of delivering stuff bought by a few stores that buy regularly from the auction during garden season. They don't do much during the winter but if one of the stores buys shipped in (what the auction has brought in during off garden season) then he would be hauling that also. The young man that's been doing it is having surgery and doesn't plan to come back to the position afterwards. Hubby asked for the locations so he would know mileage and the pay before he agrees to it. Would be nice if it pays enough. He asked why he was the one asked to replace the guy as we know there are others that haul in the area for years... he keeps the livestock trailer CLEAN ALWAYS. Doesn't matter what he hauls even when it was Daddy's furniture to our barn. He pressure washes the trailer ALWAYS.IF he hauls critters then he sprays it out and scrubs it down and then sprays it again. Just how he was raised.