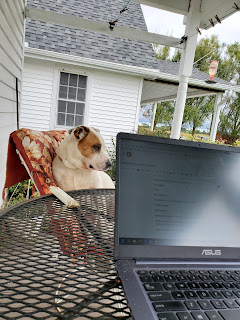 It's getting too cold (50 degrees with wind chill of 43)for this. LOL. The husky in her is showing. I stayed out with her about 30 minutes. Long enough for me.

Since I am recovering from getting my bivalent booster (mild, really mild but the fatigue is strong and a sore arm) and Hubby is hauling across the state. I decided to finish dealing with the "eating" issues.

Sunday was a nice day to be outside. So we sat on the kitchen porch with Charlotte and talked about the biggest problem we have in our life right now... eating healthy.

Doc has been on us about some low numbers in our blood work. Mostly for Hubby.

Hubby is one that was raised on big servings of meat and corn, was not made to eat their veggies as his dad hates veggies and most fruit, and potatoes was seldom on the table. They were farmers and raised beef and pork. Sunday's meals was popcorn. Cereal was their breakfast, lunch was the big meal of the day and usually a roast of some kind. Supper was leftovers.

I was raised on very little meat, potatoes are every meal (Grandpa grew them) and half the plate of veggies. Eggs, potatoes, bacon and canned biscuits (or toast) for breakfast every single day. Mother never fixed lunch for her or us two kids. Daddy got a bologna sandwich every day (just like his Daddy). Supper was a small piece of meat, half a plate of fried potatoes and a little bit of corn or green beans that Mother canned

We had fruit in season and Hubby had applesauce during winter. I didn't.

We decide to do what Hubby's former employer had us do one time (got insurance for free if we did it , boy those were the days).

Eating a rainbow diet. You can google it to get all of it but general guidelines of eating veggies/ fruit for each color group a day.

Since I am in process of inventorying the pantry/freezers. I set the spreadsheet up to list under the colors.

Neither one of us is much into eating bread daily but need grains to stay healthy. I struggle with grains flaring my Crohn's. BUT we need grains daily so I need to get that in.

Rice (over a half dozen different ones)

I do have rice flour, semolina, and almond flour.

Grapenuts... I use it more in desserts as a layer in parfaits than a cereal

Hubby's calcium is low... So we have cheese, yogurt, sour cream, heavy cream, half and half and milk (plus dried beans will help also).

We decided to list main dishes, then figure out which colors of veggies and fruit, grains and dairy to add by day. Hubby thought the color blue/black/ purple would be hard to keep in the diet. Some sites say beets and cabbage fall in this. I think beets are red but I have raised purple radishes. My "red" cabbage is more purple that red. Depends on variety I think.

Here is the list we made sitting there. I went back through the inventory and added a few things we had like pizza burgers and breaded tenderloin.

Green beans, potatoes and ham one pot with corn bread (my favorite but it was the first thing Hubby thought of)

Potato soup (I have purple, yellow, and red potatoes I can leave the skin on)

Frittata aka big egg to Hubby

Prime rib roast (Christmas only unless he finds one cheap)

Mac and cheese with smoke sausage and peas

Meatloaf and mashed potatoes with green beans and corn

Ground pork /mild sausage/hot sausage  some as patties and some as loose ground meat.

I have canned beef stew, chili and veggie soup. I have a package of dried broccoli cheddar soup and tortilla soup. I can quickly make taco soup as I have taco meat in freezer. I have store bought soup of chicken noodle, tomato, cheddar and fiesta nacho that I can use as soup or sauces.

Leftovers that are not enough to make a 2nd meal will go into 123 pasta, casseroles ,stew, soups,chowders and stir fries. I have added liquid to casseroles to make soups.

Amish elderly lady told me she will grab 2 jars of veggies and 1 jar of protein and calls it pantry soup on a regular bases through the winter. Serves it with pie or a cake with fruit instead of frosting and of course homemade bread

I still need turkey for the freezer and Hubby wants Fritos which he forgot to buy yesterday while we were at the store. I sighed as they were on sale and it was the last day of the sale.  We each had a cart and our own list as I got the perishables.

I will get fresh cabbage and brussels sprouts off and on through winter. Not often on the cabbage as we are making kraut (fingers crossed it's good as it's in the crock).  I put buy 3 on Hubby's list for brussels sprouts... he only got one as he had his finger on the number. I'll have to pick up my pepperoni in 2 wks. Hubby forgot to order the bologna (special made) from a restaurant we grew up around so we might not be able to get it.

Prayers for peace and common sense and GOOD MANNERS