Plans for this week. 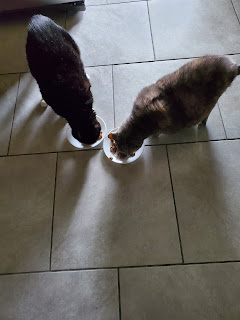 On left is Mr. Cuddles... because he likes to cuddle

On right is Miss Bailey... Miss I don't want anything to do with Nonna unless she's giving treats.

Sucks up when I came in to drop Son2's and his lady's birthday cards off along with the magazine he had lent me. She ran straight to the cabinet where the canned cat food is (that's a treat). I split the can between them and figured I would get a chew out for giving it to them since they are on diets LOL. But didn't.

I had a doctor appt at noon, almost 2 hrs. drive SOUTH  so routed everything to do the following:

Stop at Meijer's as we don't have one near us. Got coke a cola and sprite on sale. If I do what I used to ...divide the amount of each bottle into 3rds. I have enough to go 162 day... I can add the Vernor's ginger soda (the only canned pop I drink) to stretch it farther.  I also got broccoli and cauliflower on sale.

I drove across the street and had the doctor's appt.

Then drove to Son2's...15 min. drive a bit SOUTH of my appt. Dropped off his birthday cards (he is 40 today and next week his lady turns 43)and gave treats to the 4 legged grandkids.

Then drove NORTH 25 mins. to Daughter 2 and dropped off bday cards for 2 of her kids(26 and 22) as she will see them this coming weekend. Gave me a chance to see her also even though she was at work (bartender) and give her a hug.

Then drove NORTH 25 more mins. to Daughter 1's to drop off her bday card (50 SIGH, not sure which one of us is feeling that more).

Within 10 mins of being home Hubby let me know to pick up a prescription and Subway sandwiches.

It really worked out at I only went out of my way of coming home by 10 miles.

The guy that was ordering saw blades for him let him know it wouldn't be in until Jan but ordering them now froze the cost so he ordered them. If his blade on the buzz saw breaks... he will be using the chain saw again.

Autumn is arriving in full force on the 22nd... morning temps in low 40s or high 30s. I am getting the winter curtains and bedding washed and dried HOPEFULLY today. I won't worry about clothes until next week.