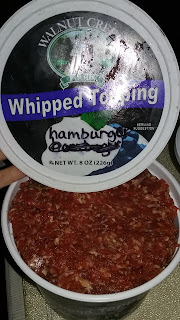 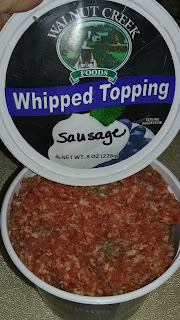 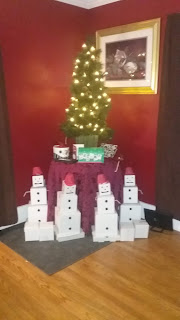 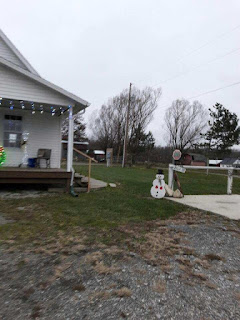 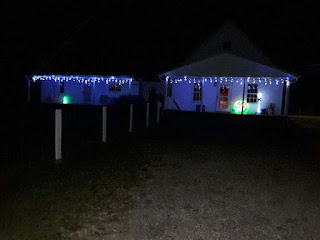 We only used LED lights to decorate even though it meant no candles in the windows, no signs of JOY etc hanging around... The green blob on the left is a green LED rope light wrapped around an upside down tomato cage to look something like a tree. Post on porch blocks part of the wreath and the lamp post almost blends into the house. Neighbor said his kids got a kick out of the snowman at the hitching post with a sign that said Santa stop here.The tree was from when we lived in a very very very small house. We couldn't find any place close to us that had live trees. Frugal to use what we had....a little sad as most of my traditional decorations aren't in use but frugal. We have the lights on timers and make sure we turn lights off in the house.

The containers of sausage and hamburger was gifts from the Amish neighbors. Very good flavor...but no grease, NONE not even with the sausage. Wasn't dry though.When we asked if they had the sirloin ground instead of the scraps,they thought it might be because their animals are grass fed and ran in a pasture.

Along with those items...I baked the pumpkin that had been on the porch and pureed it and put in 1 cup servings in the freezer. This is one of the pumpkins that was growing in the compost pile left from the previous owners. Hubby buried one of the other ones that had went bad between the grape harbor and the electric pole. We will see if it grows anything.

I bought the flour, sugar etc that I had on my Dec buy list. Still need cashews and ground pork but will get that when we go to doctor appts on Tuesday.I got a couple pork roasts, one we ate, the other is now in the freezer.

We were working on what to plant in the gardens and I listed what we ate then we decided to plant more in the garden so I am back square 1 on planning the gardens. BUT the focus is to grow as much as we can of what we eat and eat in season.SO if we want broccoli in Dec we have to have it in the freezer. IT's also to grow more of my own plants from seeds rather than buy the plants. We started listing what fruit we can glean, we have 2 different apple trees that we hope will do better with us trimming them and using dorminate oil. Neighbor lady has pears that she's already said that we can have some after Amish neighbor gets what he wants (he does handy man work for her as she is a widow).

Hubby starts working for ODOT (temporary job) Dec 24th but he is off Christmas. We decided that this coming Monday we would start the routine as if he was working.Fixing breakfast for him and packing a lunch that doesn't have to be heated (I ordered through The Prudent Homemaker web site for a thermos from Amazon.) He has for the majority of his working life worked 3rd ,even when he farmed with his Dad so this is a big change for us as I am used to him being home during the day.

Brother was clearing out the cabinets at Dad's house and found coffee that had not been opened so he split it between us. We don't usually drink decaf so I mixed it with our regular coffee grounds 1/3rd  decaf and 2/3 rd regular. It will stretch our coffee by 2 months.

While sitting on the love seat with Charlotte I realized we had a draft coming from the window that was behind the window, even with a storm window on it. Got to checking all the windows and found what Hubby called cigarette paper cracks at base of windows. He had enough corner round to deal with the front room windows and I used oil lamp wicks that didn't fit my lamps to fill the rest of the as the window sill  is actually above the bottom of the window. Made a lot of difference. In checking this we realized that the thermostat was put on a wall that has a heat duct right behind it causing the thermostat to read 4 degrees warmer that is should. We now have thermometers in 3 areas of the house to maintain the house at 68 degrees except when we are gone when I lower it.

Our mechanic is working on our son 2's car since it broke down (radiator has a hole) and son 2 is now driving mine.Since I need an oil change our mechanic offered to do it when son 2 goes to get his car and then we only have to make 1 trip to pick it up instead of 2.

I will be researching seeds for the gardens this coming week to meet what we have decided to try to grow.

Blessed Be
Posted by Chef Owings at 6:06 PM 8 comments: