Putting on the frugal thinking hat 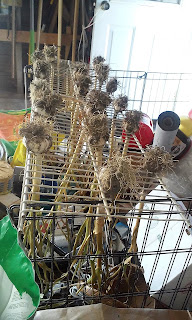 I had to really put on the frugal thinking cap this past week.

First I really really screwed up and left two of my computers and rolling brief case in my son's dining room. He lives an hour away....the good part of that is it was left in his dining room and not out on the front curb that I have feared I had done. More frugal to drive to pick them up than to replace them???? Still we had to go get them so I decided we would go ahead and run some other errands that wasn't suppose to be done until next month. SAVE GAS at least.

This is the garlic I harvest a week or so ago.It's cured so I can cut the stalks and trim the roots for storage . Then I will pull the next batch that is ready. Nice this year that it's ready a couple weeks apart instead of last year when I have over 100 heads come in at one time.I wasn't set up to cure that many at once and had to scramble to get it done.

NOTE !!!!! I might have zucchini this year!!!! YES REALLY, it's okay you can laugh because I must be the only person that can't grow zucchini. I might get one or two off the plant and then it dies....BUT this year I planted it in the north garden in the straw bales(experiment garden) and it's got blooms and little, little zucchinis LOL!!!!

We have ate out a couple times, but did think about the price and getting the best deal when we did. About 4 times we were gone all day, we do take water with us and usually drink only water at meals eating out.Some places will let us share a meal without charging extra, the ones that don't we automatically ask for a box and immediately put half of the meal in the box to go home.We had one meal I made in to 3 more with the leftovers.

Our health ins has decided to no longer pay for the injections I get in my back (birth deformity and I don't take pain meds for several reasons). Our first thought was pay cash (not frugal at all but this was already the last resort for pain relief so I could walk, lay and sit without pain,doctor is willing to accept the same cash payment as our ins was paying.). Then we decided to run with the appeal system. My doctor is already appealing from his side. They say it's not medical problem and then would accept a new MRI but won't approve a new MRI.Seems like every 5 yrs I have this battle. BUT my Dad has told me to adjust that when you get 65 it's a common battle. This will be one that if denied I will have to pay cash for. It's the only thing that keeps me pain free enough to walk,sit and lay.SO we figured it in our "future budget" along with increases because we know it will only go up.


So the thoughts circled around...how can we afford to build our dream home on our dream land and pay this much out in health issues? What can we do NOW to provide for later? We had already planned $2000 (yes that high) for health based on what we were hearing from others that are retired and have some of the same issues, actually I doubled the amt, figuring on it going up.Which is the main reason Hubby hasn't retired out, No sense retiring out and then coming right back in part time as a temp to the same job to pay for ins.

So I started a list of things we can cut now and save more. Nonfood and Food was #1, using car,truck etc #2.Changing from what we use to what we can make do with #3. I would rather make do NOW then when we are in our 70s and 80s like my Mom and Pop was and having to go without.I am my Dad's child instead of Mom's. Dad is frugal, Mom and Pop were spendthrifts.

ANOTHER thought was transfer the money we save immediately to the savings and not letting it sit in the checking where it might get piddled away. We are very good at piddling away.

Dad gave me a new recipe that he has been cooking once a week for soup (cabbage,beans,corn, tomatoes and some times onion) that I haven't tried yet...I think it's because Nonna used to make bean soup, then add veggies the second day,pasta or rice the third and then serve what ever was left over stale bread the fourth. I ate that a lot during the summers since I pretty much stayed with her if I wasn't working.

We have a baby shower for that is for our upcoming great grandbaby  that is due in Aug. We decided to wait until William is born. Our grandkids are okay with that as this will be the first of  5th the generation and they figure they will get over loaded at the shower and at birth. Grandson mentioned diapers and wipes from Sam's club in a couple months, but the Mommy asked for a membership instead along with a breast pump.

I was having problems with my nose, still have sutures from surgery that was in March that was supposed to dissolved, could have told the doctor they wouldn't. He did tell me after checking the issue that if I used a saline spray or did a saline rinse at least at night and fluffing my bedding and pillows weekly I would be able cut back on the allergy meds. By doing that I haven't had to take an meds all week, that saved $10.I was already fluffing, sometimes in the dryer with no heat and sometimes just hang it on the clothes line. I like the clothes line better because of the fresh smell.I tr

I been more diligent in turning off lights and power cords. Second month in a row that our electric bill has been at $100 instead of the usually $150,(landlords was over $200 and has the same size house and everything) EVEN with running the Central Air.I try to run the dehydrator at night as much as possible but sometimes I'm pushing load after load and end up running it through the day.

Hubby is riding the motorcycle instead of driving the truck to work. That has saved almost $100 this month.He doesn't ride the bike when there is thunderstorms in the forecast.

We went to Sam's club. I wanted to do some pricing while picking up diapers for a friend that is having a baby. Made several notes of what I stock up for holidays and winter and bought POM toilet paper....45 big rolls for $19.98.that's around 0.444¢ per roll when Cottonelle (our favorite) and Charmin (second favorite) is around $1.00 a roll. Hubby said it was like work TP....which means very thin...not sure it will save us any money if we use more but with the thought we can use twice as much and still be saving.We got dog food cheaper at Sam's. Bigger bag and for the same price we pay for a lot smaller bag.

We also went to Jungle Jim's International market and I priced condiments and rice there. CHEAPER there even with the price of gas to driving there especially if we go after making a round to the kids. Everyone is an hour away and Jungle Jim's is only 30 min past the kids.I also got some peaches for 79¢ a pound there and now have them dehydrated.Found my favorite tea and got a couple boxes for my girlfriend and myself. It was about half the price I used to pay for it when I could get it locally. I usually buy it as a "gift" for myself at Christmas and birthday and haven't been able to find it in over  a year.

Hubby did ask, said he was afraid to but thought of it, how long can I go on this pantry (speaking of food and not the non-food)with buying only necessities/perishables...Last time he asked that I stretched a 6 month pantry for a year. I just told him we would find out.

We have case sales (frozen food not cans) next month. I need to figure out if I have the room and what I want to fill that up with to place the order in the next couple weeks.