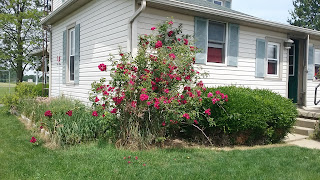 The climbing rose bush has went wild. The front garden has exploded with flowers(weeds that bloomed) and the birds are thrilled. Frugal we don't have to buy bird food except for the hummingbird and only because we feel it's better for them to have calcium etc to make the egg shells stronger. AND YES I know the back door is propped open. When we are out we prop it open so Rascal will go get a drink of water...bugger butt won't drink out of the outside pan that he drank out before. LOL.

I harvest thyme, oregano, chives and garlic chives for the dehydrator and for use.

I harvest lettuce (had some bolt before it got the size of baby lettuce), green onions, some of the garlic bulbs to cure and snow peas. Might get one more meal off the snow peas.

I transplanted a hanging basket that now is 4 pots of flowers.

We had/have several doctor appts this month. Hubby has one left, I have 5.

Hubby was diagnosed with GERD. ENT doc put him on generic meds and changed his diet...which is now a lot closer to mine (SMILING BIG TIME). Not that I wanted him to have GERD but I'm not having to fix extra stuff for him any more .

I have a bone spur in my rotor cuff that is going to be dealt with ...Jumping the hoops of ins as both shoulders have issues but I can only to one at a time and have to wait for the MRI to be approved etc...

I dug out the old drip hoses and put them in the south gardens. We were going to change how we watered but with knowing we will be moving within a year or so we decided to hold off on buying anything for gardens.

I have 2 rooms to finish prepping for summer this coming week and putting the last of the cold weather stuff away.

We took 3 loads of "stuff" to the thrift shop.... I think we are almost through what was the kids stuff. LOL

I turn AC off during the late evening to morning hours (unless it's storming) and leave the windows open.. Hubby runs a small AC in the bedroom while he sleeps days , it's set at 75 with med fan. He prefers 72 but with having the ceiling fan on also (only room with a ceiling fan) he sleeps ok.

We are looking for a home with land, our realtor is sending us updated lists that meets what we told him we were looking for in 6 different counties. Saves everyone time and gas instead of running around. When we go look at the houses , we do a "run by" before we call him... pictures of what looks far off the road or without close neighbors aren't always what they really are.

Hubby ride the motorcycle to work when it's not forecasted for rain.

I changed some of my routine to help ease the grief of losing Miss Kira along with Rascal changing some of his also. Miss Kira did  perimeter clockwise..Rascal walks counterclockwise. If I use the word perimeter he will walk in the driveway and watch me but not walk with me. If I say walk, he runs to the edge of the perimeter across the driveway and waits for me. He begs (sits pretty and barks at the truck door) for a ride in the morning when Hubby gets home and then doesn't care the rest of the day...if I/we are leaving and we tell him he can't go, he goes and lays down unlike Miss Kira that would HOWL and CRY and then go pout.. The only thing he begs for is a ride not food or his treats. He definitely was following Kira's lead instead of being himself. He is more of a barker than she was and he is jumping up and checking whatever is going down the road where she only did it if someone pulled in the drive.

We had our small tiller fixed instead of replacing it but are replacing the weed eater instead of fixing it. Based it on price and the age of what we had.

I broke down and applied through our bank for a credit card so I could rent a car when we went to go to Dad's as we only have the truck and bike now. I don't care for credit cards but rental cars required credit cards. I got a limited at my request amt for 0% interest for 15 billing cycles (which is less than 15 months) and then it goes up...but since I don't carry a balance I don't really care what it goes up to.Bank thought I was weird for requesting a low amt but what ever LOL.

We ate from the pantry except for twice, both times got "lunch" out and took home leftovers for dinner due to doc appts.