How we saved Money we didn't think about 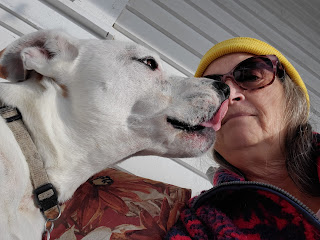 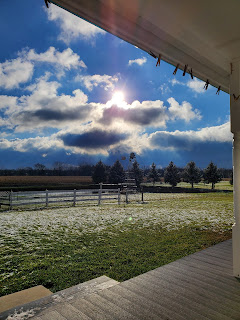 I am glad I moved my head back before that tongue came out LOL.

We were coming home from a funeral and got a phone call to deliver a message to an Amish... worked out great as we were going to be driving right by his house ( so no driving 10 miles , yes he gets paid for messages)but we knew he was at a wedding and wouldn't be home. Hubby wrote a note and I had him put it in the freezer bag we keep in the truck (Amish get car sick and that's what they use for that so it can be gotten rid of nicely) and he used a clothes pin to attach it to their clothes line in front of the front door. W said it was nice as she saw it before she got up on the porch at 2 am. The one boy wrote on the bag he saw it but left it there for Dad. LOL

I cooked taco soup on the stove with cornbread muffins... we ate it twice with the second time with rice that came from the microwave. So no propane used for that meal.

Today Hubby went to add softener salt  and checked the filters to the furnace and the cold air vent... HUM guess we won't be using as many filters either as none of them needed changed. We are guessing that will be cut in half so that's a savings of $125 a year. Something we hadn't thought about.

We are keeping track of what we save so we know when the "savings" paid for the stove and chimney. Since the wood stove oven is holding pretty much at 350 (thermometer on door) I will be baking the bread in it. Part of the bread dough will go for a deep dish pizza that my Nonna used to make .The pumpkin apple soup is simmering on the stove. Hubby isn't much into soups but liked that there was soup on the stove so he can eat it any time instead of looking at snacks as he is trying to lose weight.  I have ground pork patties to go on the grill and a huge sweet potato that will be baked in the oven also plus green beans that can be heated in the small pot on the stove... no propane for the meal again.

We also realized that the electric bill will not go as high as the furnace doesn't come (set at 50) on so the fan is not running. I know last winter the electric was up $50 due to the furnace fan running as a circulation fan to keep the house more level in heat. We turned off the ceiling fan and the rotating fan in the front room as I got the stove to be steady and not run us out. Hubby still struggles a bit to NOT throw several pieces of wood on at a time. Sunday being a day of rest I had him watch me take care of the stove. He said this morning it was great as he didn't have to add any  wood from 10 pm to 4 am when he as up anyways. Large hard wood is good for night time . I also told him to think about what wood he is putting in the stove. Soft wood (like cotton wood) burns fast but oak, hard maple will last longer and you use less wood. You can tell what is soft wood vs hard wood as hard wood is heavy and soft wood is light weight. He picked up some wood the other day (we only paid $70 for 4 cords (4x4x8 is a cord of wood) of wood and $40 of it was for E's 4 sons that helped unload on the one trailer). He put the word out he was willing to take scraps and slab and they almost over ran him. One asked if he could haul wood to their mother( just widowed) in exchanged he would reload the trailer with the scrap from cutting her wood. He would have hauled it for free but it worked.

E asked if we could figure out how to put a phone out in our barn as the other neighbor is getting rid of her landline even after he offered to pay for it as he knows since her husband died she had to cut costs and a half of dozen Amish were using it. She was charging them 75 cents a phone call. Since it's not adding any costs to us to have it, we put the extra phone and charger in the barn in a metal file cabinet to keep mice from messing with it with note paper and pencil and taped the number to the top incase they needed to leave a call back number. Added a metal lawn chair and a light on the wall in case they don't have their flash light. We just put a donation bowl in the drawer as we really didn't want anything since it wasn't costing us... I think we repeated that a lot. It actually is better for them to have it in our barn as they park the buggies and horse at E's sawmill. They aren't parked along side of the road like they were with the other neighbor. Plus E's youngest brother thanked us as he can bring the kids with him and let them play at the barn or sit in the buggy as he is way off the road . E made it clear everyone was to park their buggies at his sawmill so we aren't dealing with manure.

We told our kids we were on a phone party line with the Amish. They thought it was funny. I can add, it's been busy as "donations" have paid for 1/3rd of the bill and it's been only a week. H said doctor appts, confirming feed deliveries and business calls will be the majority. Death in the family if needed. Hubby gets some of those on his cell phone anyways.

I ordered some specialty flours and used a code that was for that day only that I just happened to run across. Hubby told me to use the savings to order the extra's I would like to have.  I noticed he tires quickly of the same bread on the table. I started paying attention to what type he buys (not white sliced) as I just tell him to get some bread and don't specify. He is more of ciabatta, French and Italian and some rustic. He likes tortillas and sometimes flat bread or pitas. I like Irish soda, pumpernickel, rye and rustic. We both like oat breads. I think we should try potato bread.

I found a penny then a dime and then a dollar bill.

Hubby brought home a pie, one of the Amish ladies gave it to him for helping her get the milk cow back in the pasture and off the road as she was home alone. He was going down the road to another Amish when he saw the cow and her.

M sent over a pan of caramel cinnamon rolls after I shooed their colt back over into the pasture.  He had rolled under the barb wire when he was sleeping. His Momma wasn't too happy with him but she was waiting for him at our gate so it was easy to get him back to where he belongs... unlike the one last month that was across the road into the corn field kicking up his heels. E is slowly (because there is a supply issue) changing the barb wire to solid metal pipe. Horses are rough on wire and they lean across it to eat on the other side.