You know how some nights go....dead tired, fall asleep as soon as your head hits the pillow then when you wake up and feel like you slept all night only to find out that you only slept a few hours so you take that potty break, get a glass of water and then go back to bed hoping that you fall back to sleep only to just lay there HOURS? Yeah that night...was last night. Of course my mind decided to start running so I updated the stock pantry list and tried going back to bed and then it started listing all the work I need to get done... so I thought "dump it" on paper , got up again , got paper, pen and dumped it. 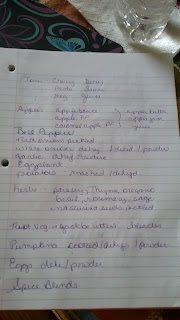 and then flipped the page and added this 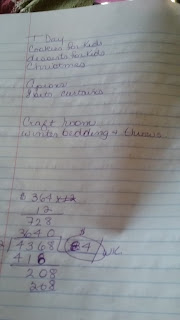 Yes I even did math trying to figure if I should break the grocery money down per week or month or bimonthly and NO it didn't help me go to sleep, that happened around 3 when I might as well got up AND Rascal woke me up at 7 even though Hubby had let him out and dealt with fresh water and food.

This morning over coffee I talked to Hubby about how huge the list was and then stopped because of the look on his face...then it clicked...it's OCTOBER and every OCTOBER I am on overload between the gardens,getting ready for winter, weather changing back and forth triggers pain, pain and not eating right and not getting good sleep triggers my Crohn's and this year I focused on filling the pantry completely now instead of filling it in Nov/Dec/ Jan as he reminded me of pork for New Year's Eve and Day.

First I have several medical appointments on top of my therapy I need to stay on top of and along with that is quick simple meals for dinner that I don't have issues with and  WITHOUT eating out.

We decided on 3 things concerning the pantry...

First we will not buy anything unless it is a need and we BOTH agree it's a need. We have already agreed on what is left that is NEEDED to be stocked in the pantry. We also talked over what we think of as Fresh produce/dairy needed on a weekly/ 10 day/ bi weekly (haven't figured that one out yet) time frame and still are figuring out what is reasonable for fresh food.

I highlighted what is needed on the pantry list... we could go without it but it would make things a lot rougher. Most of them are at Sam's club and we usually go to a certain Steak house for Hubby's birthday and Sam's club is right across the street. A steak at Lock 16 in Lima OH for his birthday and Prime rib for Christmas eve is the only thing he ever asks for.

Second I would keep track of what we buy, spend per category and per store for the next 12 months starting today. http://www.lifefreedomfamily.com/2017/09/the-great-grocery-project-one-year-recap.html?m=1 is the base plan of what I plan to use.

Third, we would be using a lot of ideas/menus from Brandy http://www.theprudenthomemaker.com/

Fourth, I would keep better track of the savings   http://thecouponproject.com/downloads/savings-tracker/ I have used this savings tracker for years.

I prioritized what I was doing in the gardens and what I am processing. I will need to get up a bit earlier to get things around for the dehydrators before I start canning and I have to pay attention to leaving during the day for appointments.

I checked the weather forecast for the next 10-14 days and it's decent even if we get the rain (PLEASE) that they are forecasting. SO for those days the work..yard/gardens/weatherization will be done. The week of the 16th Hubby will be taking classes for his EMT recert on 1st shift I will focus on inside the house (weatherization, winter bedding, etc)and sewing the winter curtains.

My goal is to have this workload completely before Nov 1st when Nanowrimo starts for those that want to write books and need support to get it in gear. https://nanowrimo.org/ AND start on Thanksgiving and Christmas.

end of Sept of being frugal

I had a Crohn's attack at the first of the week so stayed home. Was able to still can pasta sauce and applesauce and work on pantry shelves.  I need soy sauce , that's the empty spot on the bottom where there are 2 bottles by themselves. 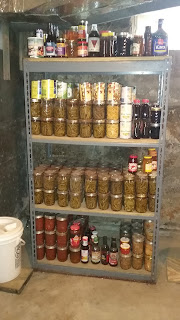 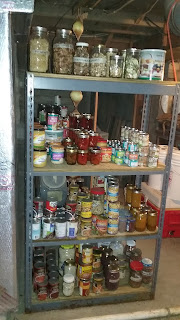 This one is pretty full.Bottom two shelves is assorted dried beans and canned beans.

Hubby got the truck brakes fixed and the truck is now getting 5 more miles/gallon.

I went Wed to my therapy free at wellness center and came straight back home..

Thursday we went to check out a house that really came close to what we are looking for...by Saturday it had sold when we decided to take a second look. Wasn't on the market a week.

Friday we went to Hubby's parents as his dad is having trouble breathing and they are now checking his heart as everything else has came back good. He has an ultrasound for his heart this week and then some blood work and possibly a stress test.

His mom fixed lunch and was telling me she spends $145 every 10 days for the two of them.Her daughter had her go to Aldi's but Mom O wasn't happy with the taste of the green beans until  I compared what she liked to what was Aldi's and pointed out that what she liked had salt where Aldi's didn't and she was salting the green beans also when she cooked and then turned around and told me that Dad O wasn't suppose to have salt so she had slowly replaced the salt on the table with salt substitute... when I repeated back to her what she had just said and had her check how much salt was already in the green beans she was knocking her knuckles against her head. DUH But she did give me some tips for cooking for two for when Hubby retires.

On the way back we swung by G &R tavern in Waldo OH and picked up a full roll (32 slices) of their bologna that we had ordered ahead of time. It's special bologna and something I can eat without problems. We love it fried. twice a year we buy a roll and then freeze it so we can have the sandwiches without driving 2 hrs to have it.Also it's half the price as a roll than what they serve as the sandwich.We split the roll with a friend that never goes there but loves the bologna (because we shared LOL).Plus we aren't going out to the way to go there.

Saturday I went to the community(Village) yard sales. I didn't find any curtains like I was hoping. Found one set and since all the rooms have 2 I almost didn't buy it until my girlfriend ask if I was putting a curtain in the butler's pantry. Found a winter throw rug for the mud room, a crib blanket for my feet in bed,a gray winter shawl , 5 canning jars, and 2 gym bags as mine is ripped and I figured if I didn't get the second one for $2 Hubby's would rip and I would be kicking my butt.. I found a knit neck scarf for my one daughter who is always cold, some tank tops for my other daughter that is burning up under her uniform, a circular saw and hedge trimmer for my son and a toy truck for great grandson.

We came home instead of hitting Wendy's which was right there, ate lunch and went to town to use the Kroger points for gas and I do the shopping. Saved 50¢/gal on gas.

I went to CVS and bought CVS allergy meds(on sale) and Xlear, had a coupon for the Xlear and 30% off total price from CVS so I saved closer to 40%.

I then went to Krogers...first I hate shopping on weekends especially in the afternoon. This wasn't as bad as I feared with it being the last day of the month also. They were restocking from the morning shoppers so I did some substituting and stayed in my price point of things. I saved 21%. 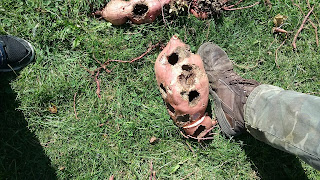 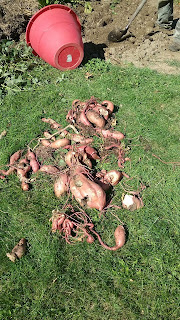 Double the amount shown in this picture and the  mice ate almost every single one. Well fed for sure...grrr but at least they weren't in my pantry doing that. We ended up with about 3 meals worth.I doubt if we will try again.

This morning we put the groceries away in the pantry and Hubby hung the onions for me.

AND we talked about where the pantry was and what we should still try to stock before he retires. What we felt would be fresh that would need to be bought, do we go every 7 days or 10 days like his mom or just when we are going to be in the town. Something for us to decide tonight over dinner.

Have a Blessed week.