curbing the eating out monster. 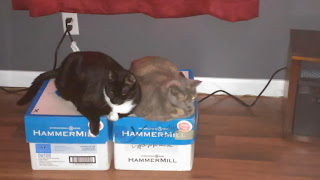 No they don't have anything to do with eating out... these are my son's cats Cuddles to the left that he fostered for a friend and then adopted and Bailey that he got from a rescue shelter. Bailey is not happy with Cuddles who is trying to take over BOTH boxes. I used to "babysit" them a lot when son was out of town with work. He is home most the time now and I miss my grandbabies so once a month he sends me a pic of the two.

Our eating out budget is our monster. We use eating out as entertainment as Hubby doesn't like watching any movies even at home and I don't like sports unless I have family or friend in the game. We don't go to the malls and there really isn't anything around us to go do something like hiking...so we go to restaurants.We have tried putting the eat out money in with the groceries...that didn't work as well as we had hoped.It's also has been Hubby's answer to when I go down with my Crohn's and he doesn't like to cook, sometimes he won't even use the microwave.

This morning we sat down and listed the restaurants that we go to with the knowledge it averages to be $40 each time out with tip. YES I kept track this year. how many times and the costs AND told Hubby and then  I watched his face fall. It averaged out to 2.7 times a week of eating out AND $5,320.

Bob Evans ... 6 times a year as the only time we go is with my Daddy that loves this place and their sausage gravy and biscuits (he is homebound). That remains as at the age of 90  I am not going to tell him I can't take him even if I have to eat nail soup for a week.YES we pay for him. I started getting gift cards for this from Krogers and at least earn double points.

Mt Victory plaza inn. 3 times a year with Hubby's parents Mom and Dad O. Also with remain as they are in their 80s but they pay for themselves. This will drop down to 2 times a year as they are to the point of not wanting to go out in the cold and wet of winter or fall and it's about 40 min from their home.

Lock 16 steak house..Hubby's birthday and our anniversary. He can get whatever steak his little heart desires. We will drop this down to Hubby's birthday because I really don't care if I eat much steak...give me pork chops LOL.

Mizolsol China and Mel-o-dee's is when we are at our son's but he is now starting to cook for us instead of us going out to eat or him ordering in. That was 2 times a year for each., we paid for ourselves and Son paid for himself and the tip..he tips very well. But he agreed that we could drop this down to 2 total.

Perkins... 4 times a year after blood work so I don't pass out after fasting 14 hrs. I can't drink OJ after fasting so I am going to try to remember to bring my hot tea with a bit of honey in it and see if that will keep the faint away with having a bfast already fixed and just needing nuked when we get home 30 min drive home so I'm closer to fasting 15 hrs.

Golden Corral 4 times a year. Two times after my back injections which is 2 hrs from home and 2 times after our meetings with our finance guy which is 2 hrs away from home . We only live here due to Hubby's job so are looking at moving closer to kids, doctors etc. drop to 2

Hong Kong ... was 12 times a year as we meet with friends and our son but are looking at 6 times a year.

China Buffet ...we stopped going here when Hong Kong opened due to that's where our friends and son prefer. We  decided to go to China buffet 4

Cracker barrel...used to be 12 times a year is now twice a year. Both of us is okay with this just going away completely.

Taco Bells... Hum this started when I was in college and ate there every day. We have weaned me down to 12 times a year. This year I plan on 0 as I can make the same food at home...I know but the drinks keeps me going back not the food.

Wendy's 12 times a year This is Hubby's go to LOL we decided 0 I have frozen hamburgers and bacon just need to keep buns on hand so he can have his baconator. Neither of us eats French fries that much nor do I drink soda fountain pop.

Subway 12 times a year ...philly cheese steak foot long on flat bread toasted with loaded with veggies. I haven't found a flatbread equal to it nor do I keep steak around that much so we decided  4 times a year even though  90% of the time I either use coupons or my points.

Applebees... 2 times a year. Once was when his parents wanted to go another was when A friend wanted us to try their blackened steak. We decide 0 this year.We told his parents we would prefer to eat at their Chinese place than Applebees or we could bring the meal. And we can just tell the other friend we aren't going there.

Wingers... sigh their wings in garlic butter and the deep fried veggies... was 4 times a year is now 2.

KFC...not for the chicken but Monday night potpie special and Tuesday night country fried steak ...was 12 not 0

Al's pizza 6...every other month rotated between philly steak pizza, Al's combo(loaded with veggies)and taco pizza... now 3. No I can't match their pizzas.

Dairy Queen... we don't get food we get ice cream using whatever coupon. Was 12 times will go down to 6 . I don't keep ice cream on hand beyond klondikes or Hubby will eat a quart at a time and that's down from the half gal.

Wagner's... is actually a grocery store but we found they have great fried chicken and we can get exactly the amt we want for less than KFC or Inn Between. 4 times a year

New place... this was happening about 12 times a year someone from work would  want us to go with them now it will be 4

This averages to once a week with $2080 for the year.. I don't see it be that high as I know I will split the pizza up to make 4 meals so that will make 9 times of  less eating out. Hubby will be retired so less likely of coworker asking us to go with them. I decided to keep us focused to make a yearly calendar with the restaurants listed each month. When we go we mark it off ...might replace some of our favorites with new places as Son brought up going to a Mexican place he likes instead of Misolsol China... and that's okay too. I have a full pantry, I am checking to make sure I can make Hubby's favorite take out from home. Daughter suggested a couple options for me to replace my "new drink" at Taco Bell LOL. Have to adjust to making 1 drink for just me as Hubby only drinks water, coffee and unsweetened tea.

I would love to see this go down to every other week but I feel at this time Hubby might feel deprived and maybe resentful since he is retiring. To help with this I am asking him to help make the menu to get in some meals he would like to have.

Do you have an eating out monster?