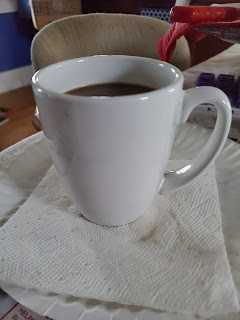 My 3rd cup of coffee which is also my last cup of the day. Laundry is on the drying racks and it is very damp and dreary today. Dishes including the pans are washed and on the drying pad. Stuff for daughter 4 is gathered except some things she is taking from the freezer like green tomato slices and Brussels sprouts. She should be here late morning.

Son 2 called to tell me his friend just tested positive so he is not bringing our dog truck back until he is sure he didn't get covid. His car is still in the shop being fixed so we didn't plan for it to be back this week. He did tell his friend to get a second test to make sure it was not a false positive as she takes care of her elderly father and he refused to get a test but was willing to quarantine. He spent the past week working from home so he deep cleaned everything (laundry, bath and office left to do) of his 3 bedroom home. Change the guest bedroom to the bigger bedroom since he got Daddy's bedroom suit and moved his to the guest room. I got the twin bed he had as child for my guest room. It looks really nice. His kitchen and front room always looks good. He was talking about getting a file cabinet for his office... we have 2 in the barn so he doesn't need to buy anything.

It's take trash to the road tonight. I have a couple things in the frig that needed tossed, not even a serving which is why it's getting tossed. Hubby usually eats those things and he shoved them behind the eggs when he cleared the table...so I didn't see them and he forgot he shoved them there . I put that kind of stuff that needs ate first in the drawers. SO they don't get shoved behind stuff. I didn't bother to ask why he pulled the eggs which were in cartons out to put the stuff behind them. When the oldest eggs are in the bowl so we know what to eat first. SIGH.

One deep freezer has been emptied, defrosted and cleaned. Only 3 more to eat through along with 3 frig freezers. We did not buy any turkey as I have enough turkey packages to go 6 more months or ham for stocking this year. I will look at ham at Easter.

We got the electric bill in. It's the last "floating" amount of the bills as everything else is a set amount pretty much. It was $40 less than last year at the same time and electric cost had went up some. We had more Christmas lights, I used the kitchen aid mixer for 10 days straight that I didn't do last year. Everything else is pretty much the same. The only thing that is different is Hubby did the insulation of attics. Must have been the difference of the fan running on the gas furnace. Weather has been about the same as last year also.

We did not go to the store. Hubby grabbed milk when he was picking up meds at CVS that was the only thing. We had grocery money left last month that I have put aside to help with stocking up.

SO far the only things bought was Dreft newborn laundry soap so I could wash the baby stuff I had in storage for granddaughter. I got 2 bottles, one for me and one for her. I bought vacuum belts when I had to replace the broken one and found we only had one left. My seeds I ordered in December are in.

Neighbor told Hubby to get a 1 liter bottle , cut ends off and make into sock helper... She has the same size 3 in children's foot I have. He is going to use the ropes off the one we bought.

How are things in your neck of the woods?