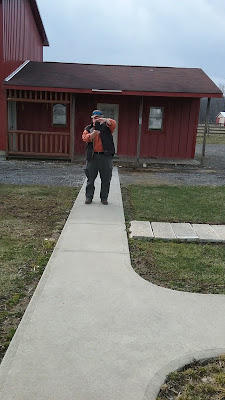 We went to 209 right after the closing where we signed our life away. Hubby is taking a picture of me. 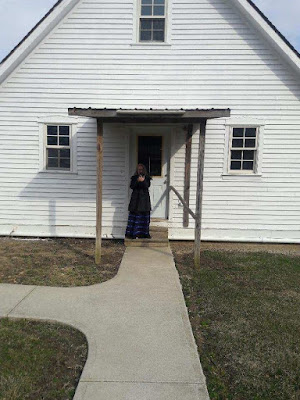 I am taking a picture of Hubby at the same time.

We all have writers cramps from signing 50 million times. Had extra papers to sign and the electrician found that he couldn't use any of the electric so besides the mortgage for the house, the rehab loan we had to come up with more out of pocket.

Right now our money is making over 10% so we are letting it make the payments instead of drawing the cash as the mortgage is 4.5%. That way we are still earning 5.5% on that money.We will have to pull the $125,000 as needed. Our contractor said he would pay everything out of the loan hoping that we can save in the other areas and not have to draw so much cash at the end.

We meet our Amish neighbor as he saw the car and came over to make sure who it was and since it was us he introduced himself , he is the brother of the seller. AND he owns the little strip of land to the south of us along with his home north of us. So we worked out a deal that he would take care of the 3 acres behind us so that's off our shoulders and he said any area we don't want to mow he will let his calves graze to keep the grass down (we have an acre to the south of us) and the house sits on an acre. He will help us redo the one section of the barn roof. He is also the person that helped the Englisher that built the house 20 yrs ago build the house. He helped the Amish family that bought it from the Englisher as it was his wife's brother, then the seller was his own brother. He had a lot of details that you usually don't get until you have lived in the area for 3-6 months, sometimes never about the house. He told us about the widow that lives the next house over south of us. AND we now have the seller's address so they can show us where the 100 plus asparagus plants is. The rhubarb is under the grape harbor. I need to get some neem oil as Brandy as The Prudent Homemaker uses on her grapes.

We go over Monday,okay we will probably go over every day just not sure if it will be both as we need to put the fence up for the dogs... anyways side track there, the electrican is coming in Monday to make sure where we want outlets,switches and boxes for ceiling lights as we will be doing the actual installation ($$ saved) of the light fixtures.

dinner needs made
Blessed Be
Posted by Chef Owings at 7:21 AM 4 comments: