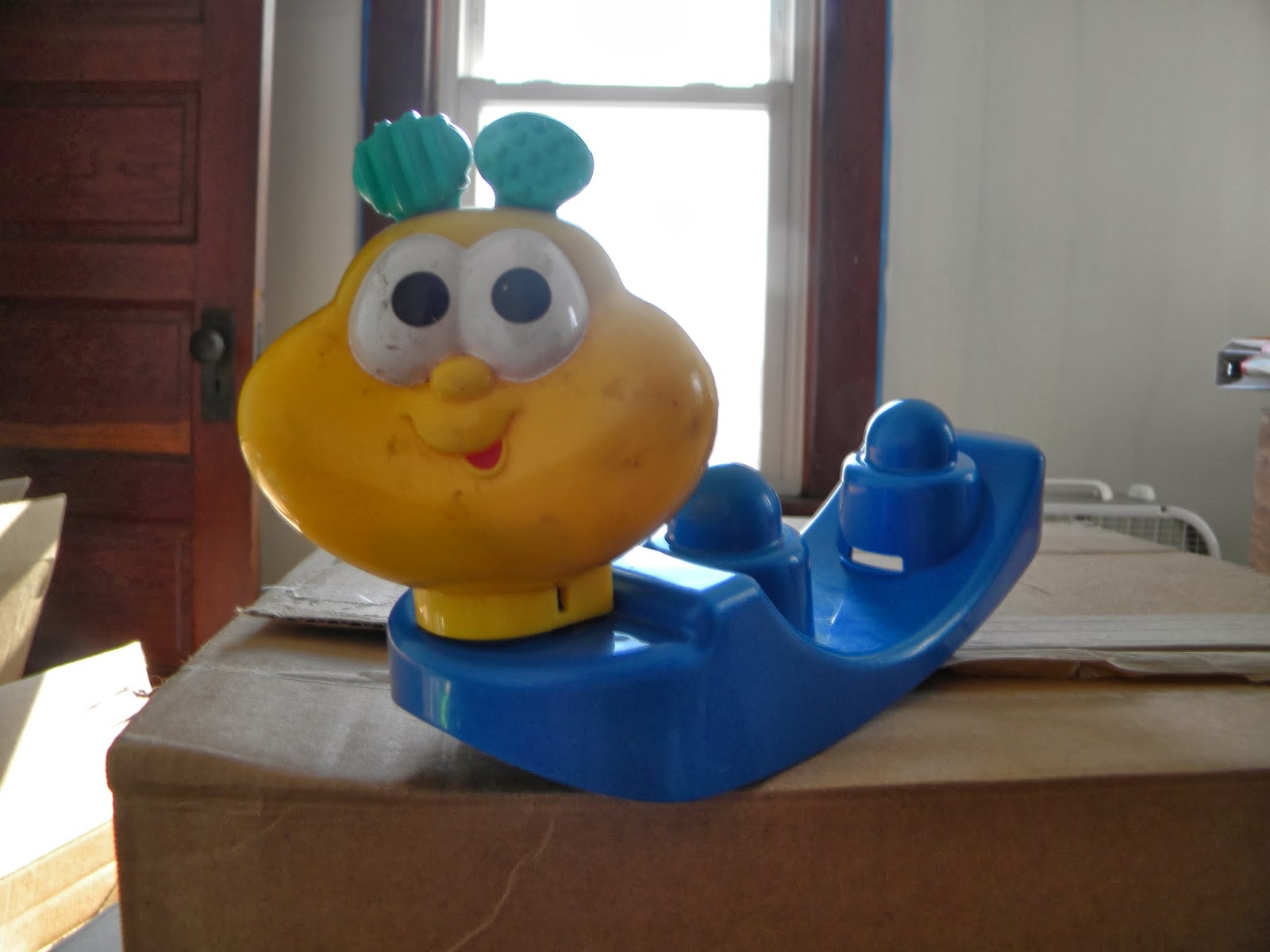 There is a story behind this toy. When ever I hear it play or see it even though it has lost most the parts of his body I have to smile.

When my first grandson was a toddler, this was his. I was driving behind his mom, my daughter , and every time she turned or stop and started I would hear this music coming from her trunk so I pulled up beside her and got her to pull over.

"There is music coming from your trunk."

"I know, it's the freakin toy that annoys me every time it plays so I am taking it to Goodwill."

"Are you kidding me?"

"Nope, he can play with it at my house and it won't annoy you."

So I got the toy...and it annoyed her anyways because instead of him playing with it, I would send it playing when she would walk in the door.Pay back for all  the noise makers she banged on  that my mom got her.

Now days the grandkids will send it playing and most of them are in their teens...my daughter laughs right along with me.
Posted by Chef Owings at 12:58 PM No comments:

February glitch,eating from the pantry , 365 declutter 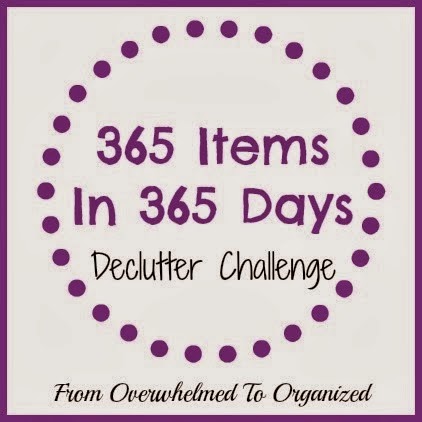 I am calling it a glitch because with a little effort we can get back on track.

We have had a lot of running around, moving furniture for kids etc and appointments in the evening...and slid right in to eating out and not eating healthy. So even though the amount being spent eating out comes out of the grocery money (and we are under budget so far) it's important to get back to eating at home and eating healthy....read fruits and veggies.

Update from the eating from the pantry...I have the mudroom frig freezer almost empty. My goal is to stop using using this frig completely.Right now it holds drinks, condiments, and some of the root produce.The freezer gets leftovers and the lunch items. I will take the money I get from the sale of this frig to buy a bigger chest deep freezer. That's my goal anyways. I have 3 whole pantry shelves empty. Each shelf is 17"wide and 35" long and usually stacked 2 jars (or cans) high so it usually is holding 100 jars per shelf.So that is around 300 jars of food used up.

I had my sewing machine tuned-up :) and purchased new needles so I can get back in to sewing. I am making warm weather curtains for several of the rooms and going back to making most of my clothes. I am short and a lot of time have to buy children's clothes which is fine for jeans and tees but not so much for casual dress or other clothes. I hate paying for styles that I do not like, do not fit me properly and decided I would rather spend the time and make custom fitting clothes (like the rich and famous LOL) and know I will wear it for a long time. It helps when I search fabric.com and our local fabric shop and find fabric I LOVE for sale or clearance.

I also am going to start seeds for the garden this week. Pray for the little seeds because my green thumb is a dark brown. Once I get the plants in the garden I can usually get them to survive their existence. Poor things.

On the front line of Decluttering.... I have been pitching at least once a day at least one thing...usually more. Yesterday we passed a kitchen corner cabinet that has been floating around our home and our daughters home for over 15 yrs. Our son asked for it for their kitchen. He also asked for a bed Hubby had made for our girls when they were in their teens that has passed around through the grandkids for their oldest son. I also took him his childhood toy box but I will be making another one of those this summer.

Have a good day

My son called me to tell me that Aldi's had their 5 LB. tubes of hamburger on sale and that it was averaging out at $1.80/lb..

Normally I don't buy tubes of hamburger but he eats this all the time so I knew it was decent (he is my picky child).

12 meatballs the size of golf balls

That averages out to $2.25 for the meat per meal...BUT we only ate 3 of the Salisbury steaks and I put the other 3 back(already cooked) in the freezer...so that is now 5 meals making the meat $1.80/meal.

IF we only eat 3 of the mock country fried steaks (same size as the Salisbury so that is a good sign we will) then that will make 6 meals making the meat $1.50/ meal.

We like meatballs too much and meatloaf too much to make a second meal of it when I only used a little bit over 1 lb. to begin with.

I now understand why Mom always had oatmeal and crackers but we very seldom ate them. I don't remember ever eating oatmeal for breakfast, that was Cream of Wheat (ground semolina flour) or CoCo wheat (ground corn grits flavored with cocoa). I preferred Cream of Wheat, Brother preferred Coco Wheat.

Have a Blessed Day

Posted by Chef Owings at 2:08 PM No comments:

After looking at last year's budget and comparing it to what we were actually spending  We were spending $900 or more including eating out. We also realized we were eating out about every 5 days.

SO January's budget was $400 and eating from the pantry.

How did that go?

I can say the first 16 days it went fine.

On day 16 we were craving our favorite pizza and chef salad. We compromised by getting it as a take n bake and got 2 chef salads instead of one so it made 4 meals instead of just 2.We eat the salad BEFORE we eat any pizza.

On the 18th which was my birthday we were coming back from our kids and Hubby decided to stop at Wendy's so I wouldn't be fixing dinner.

On the 30th we went to our favorite local restaurant and got their chicken dinner.It was the special that night so we saved a few bucks.

Also at the end of the month I was informed my Vit. D was so low I had the Rickets and my cholesterol was through the roof. I had given up dairy to lower my cholesterol, guess that wasn't what was sending it up to begin with.

I don't eat a lot of process foods at home so helps.I have added some veggies to grow in the garden this year that I normally don't grow.

Being so the wrap of the January costs was

Blessed Be
Posted by Chef Owings at 2:28 PM No comments: