Punch list is down to 125.5. Hubby added caulking the outside of windows and doors to the list for next year. We are focusing on projects we have the stuff or most of the stuff for.

We have claimed this year as Decluttering done in 2021.

We have decided that any extra money be divide by 4, the two loans on our life ins, the mortgage and the savings. Goal is to have 3 months emergency funds. We have 2.

Any money we make from garden or ice blocks goes on to the garden to add to what is budgeted for that. What we made in 2020 doubled that budget for this year.

Hubby figured he would have to cover the business for six months a year. One during the summer (July 4th factories shut down) and again from late Nov to late April. So far he hasn't had to cover any of the business. He picked up enough work this coming week to pay to start covering Feb. bills. He was offered 6 different jobs on the 4th (tomorrow) but only one could be worked in with him having to drive me in the morning to the doctor appt for my hip(right hip so I can not drive due to pain) and we are down to just the work truck as Son 2 blew something with his radiator and it's not a year old. It was dropped off at the shop today and he took our dog truck.

Daughter 4 cut her budget by almost $300 a month.. BUT she then got notified that the one discount she was getting on heating and electric hadn't went through. IF she gets it she will still have it cut by $300... if she doesn't get it ... the $300 will go on those bills meaning she won't have to ask for an increase from us.

I made a $1000 mistake on the budget.... it's okay, I made it in the income not the out go so we decided that amount would also be divide by the 4.

Lots of changes this coming year as Daddy used to put it, we will see what comes out in the wash.

We are eating from the pantry. I have a list of 30 minute meals, it would take us 30 minutes to go to town and come back (if not longer) with take out. 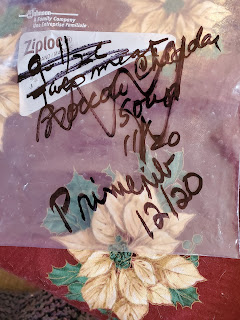 More than once LOL. I took the leftover Christmas prime rib and made Philly cheese steak pizza and then tossed the last of the roast in eggs 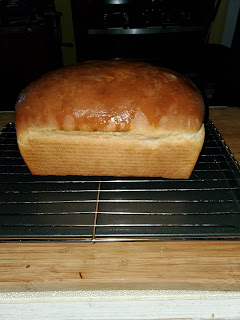 I found a bread recipe that gives us the right height for the toaster... was a little denser than I like but Hubby was fine with it. I will change what flour I used (White Lily bread flour) to maybe just all purpose and see it that lightens it. 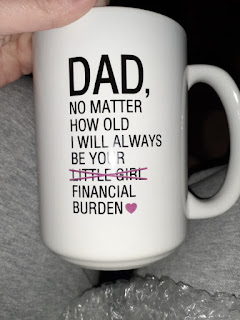 Daughter 4's Christmas gift to her Dad. She thought it suited this year.