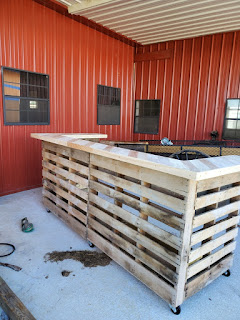 This is the bar Daughter 2 wanted made for her man for Father's day. She is NOT fooling me, she's a bartender, she wants it for herself also LOL. 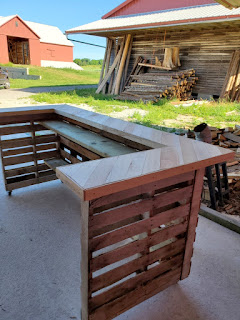 She found a picture on Pinterest. I found a pattern on Esty and then changed it to be bigger as they have 5 sons between them and told her to get at least 4 chairs. I wanted it big enough for a cooler or dorm frig to be in the side of it but not cause an issue with them bumping into each other or it. Hubby and I agreed that due to weight (4 pallets) that it should be on rollers so if either of them are alone and want to move it they can. H, Amish neighbor on our south side built it. He said it's almost like the counters he makes for Amish that sell from home. He also now has 2 orders from Englishers that stopped for other reasons. So he gave us a discount. The top was the hardest and most time consuming to do. It's now at N's, the Amish we bought the house from as he builds furniture and has the ability to spray it with sealant to protect it from the weather.  I told daughter she might have to pick up pavers for the edge of her patio. Said she had thought about it anyways as the gravel doesn't stay put next to the cement pad. We will be delivering it Saturday morning early. SIGH as that's a 2 hr. drive one way which means no sleeping in. When I told her she said she would have coffee on so if I didn't get my 3rd cup, she has me covered...the child is like her mother... 3 cups a morning for her also.

I did not collapse yesterday. Wanted to but had garden to catch up. I put 13 trays of basil, 2 of cilantro, 2 of apple mint and 1 of dill fern aka weed in the dehydrators . I canned 3 pints of the last of the turnips. Caught the laundry up as I shoved one load in the washer and closed the lid when the appraiser was here.

Appraiser was the age of our grandchildren, worried me a bit to say the least. I Googled him and found he does a lot of Amish to English converted home. So that helped how we felt about his age.  We heard a lot of , this is cool, I really like this, I want this for myself (south and north loft, bed under the skylight). Loves the two upstairs with the point if you had younger kids and teens they wouldn't bother each other. Pointed out the house was appraised as a 2 bedroom when it is clearly a 5 bedroom with option of being 7 bedrooms. I told him I had that battle with both the appraiser and our ins guy and proved a twin bed would fit in the one room and a queen in the other and you can stand up out of the bed and NOT hit your head on the ceiling unless you were over 6 ft. I asked where the other 2  rooms that could be made into bedrooms was. Basement, my pantry that has a door and the other doorway had a door (I never noticed that since the door was already gone, I asked N and he said he took it off for E as she wanted it for laundry during the winter and the heating stove for her washer was there.) and the freezer room that has a door on it also and we have a walk out ramp so it could be bedrooms with sitting area instead of how I am using it. He noted that having the outhouse over the septic tank was a plus as if we lost power and had no fuel to run generator to run the well (he has seen that happen) we still had a working bathroom. As he wrapped everything he mentioned he doesn't usually get handed a list of what was done with what materials are on site for what projects and goals for the next 4 yrs. AND the receipts.  Said it would be a good help as there is NOTHING in the area to compare the house to. The closet about 5 miles away , will less than an acre and had no working furnace ( cost of $20,000 to $30,000, Son 2 just had one done so we know that cost) and it appraised at $168K without the furnace. He was not the one to appraise it.

Our mortgage guy told me to give the appraiser that stuff... he also insisted it be reappraised as the underwriter felt it was fine with the old appraisal. Our ins guy is waiting to see what it appraises also.

IN the gardens today...

I still have strawberries to harvest and the blackberries are coming on and starting to turn. I need to finish planting the fall crop, check the garlic as it's already turning brown. I need to refill dehydrators as the herbs are going nuts.

We have been conditional approved for the refinance loan. They are waiting on the appraisal and then probably have to have this past month's bank statements since closing in mid July instead of late June like our mortgage guy wanted. I won't be doing a lot of shopping on Amazon prime day nor will I buy a new mattress for my bed until that point. BUT we did try a restuarant here in town and found the food comparable to two of  our old favorite places so that is a good thing. There is another  place the people down the road suggested we try and when Hubby worked plowing for the state several of his coworkers mentioned they ate there.

Have a great weekend.