My Dad and the old times 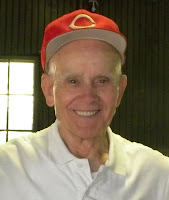 He talked about the "greens" he would go pick so they could be fixed.Poke weed, dandelion,Blue Devil(chicory) etc, talked of the berry patches,nuts(even chestnuts when they were still around) apple and plum trees that was around where he lived.The garden they grew wasn't be enough to feed them through the year.There was no electric, they heated with a coal stove that also was their cook stove.They had one kersone lamp for the whole house which was 3 rooms of average size.No bathroom, an outhouse and a wash basin.Times were hard, poverty was normal in this small village in southern Ohio.The house I remember his dad and sister living in was "poor" by current standards back when I was a kid, was actually living high on the hog for his family.We talked of lack of medical, herbal medicence,clothing and items most of us wouldn't think to even know about let alone ask about.

Groceries were bought weekly when there was work.Dried beans,lard,salt and pepper,rice,24 lbs of flour(they made 9 loaves of bread Tuesday,Thursday and Saturday), corn meal,oatmeal,evaporated milk,bologna( only for his dad's lunch for the coal mine)and potatoes.This was kept on a table about 2 ft wide and 4 ft long close to the table they ate at.

His Dad(Grandpa) and he both hunted and fished for what meat they ate.The only time they had eggs was on Easter.Then they could have as many as they wanted fried with fried potatoes.

They didn't keep leftovers as it would spoil before morning in warm weather and when it cooled enough to keep it outside the critters would help themselves.Trash cans,or things we take for granted were not there.

The only vegetables and fruit they ate was what they could grow and cold pack(waterbath) or find growing wild.

When they moved to the last place there was room for several gardens, a chicken coop( an egg at breakfast was a daily celebration right along with the noodles they could make), 4 rooms and 2 coal stoves. A well on the place instead of going 100 yards(estimate he said) to get a couple buckets of water for what ever it was needed for.The only saddness that touched them when they moved was his mother( my grandmother) had just died in her 40's.They buried her on his 16th birthday, with his youngest sister only a couple yrs old.

It was a extremely hard life that got harder when the Great Depression came.

As I watched his face as he walked through those memories, saw the wisdom gathered and stored to get him through these times of stock market turning down and wiping out his retirement pretty good.Knowing that he is okay financially due to living that hard life.Seeing the food he has stocked up on to feed himself including the apples he was making into pies and dumplings for this winter...I understand even more that my attachment to the old ways and old days aren't just a whim or passing fancy but a tribute to those that went before me and survived an existence that none of us of this generation can really understand and some just can't comprehend.

so this is for Dad and all those that walked in his shoes...

Bless you for showing we can also survive if we use the wisdom that was gained before us.

Blessed be
Posted by Chef Owings at 4:22 PM 1 comment: