Staying on Task of being frugal 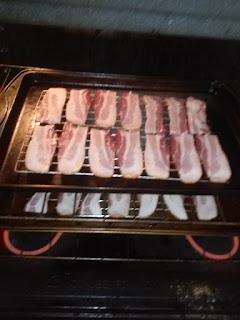 BLT's for dinner one night. I went in to Aldi's to get eggs (69¢/dozen) and milk and they had thick sliced bacon on sale for $5.99 for 1 1/2 lbs. I grabbed 2 packages and went out to tell Hubby and he went back in and got 2 more plus more eggs.We haven't had bacon in quite awhile, especially thick sliced. The lettuce and tomatoes came from the gardens.I started baking my bacon awhile back so I could actually sit down and eat with Hubby. I like my bacon crisp and he likes is not crisp (cooked but pliable?) I saved the bacon grease. 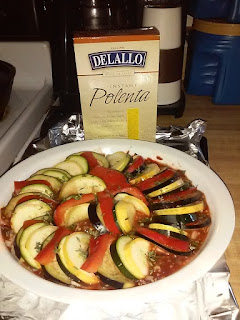 Last night we had ratatouille( this picture is BEFORE baking) with polenta. Polenta was on clearance at the grocery store awhile back for 25¢ a box. I took all the boxes they had since it was instant and made 4 servings. Most of the veggies came from the gardens.My yellow bell peppers aren't ready yet so that didn't get put in.I refrigerated the last serving of polenta in a flat pan and then cut it into squares to make fried mush from it.

I started working on "making" my craft/sewing room. I used primer that we had and will be using paint we also had instead of buying new.I found a picture on the internet of what I would love to have, not willing or even able to pay the $2000 to put it together so am looking at what I can find that we already have to set it up that way.

I mended a couple shirts for Hubby.

I harvest thyme,oregano, chives ,all the mints (again still some more SMILING)

I made rubber chicken (roasted first meal,then chicken and dumplings (which is actually making 2 meals as one meal is in the freezer for this coming Friday after we get home from the produce auction) and then added it to eggs for what we call big egg (frittata), I got some broth left over from it and some chicken fat to use later.

We didn't do any shopping except for Aldi's which saved us money even though Miss Kira and Rascal felt deprived as they are used to going for a ride two to three times a week.Which that saved us gas money as it's 15 miles one way to town.

Hubby rode the motorcycle all week to work. Not sure if that will happen this week as we have sever storms in the forecast.

I did some fall cleaning in what I call our canning area of the basement. It's where I store the canning equipment,baking pans and those items that there isn't room for in the kitchen (old farm house).  I  store the window AC, potatoes,sweet potatoes and winter squash in this area also so usually in Aug it gets a good cleaning before the AC goes back in storage. (we use the window AC for when I don't want to run the central air but Hubby works nights so he sleeps days. Bedroom gets hot). I had some boxes with what I thought was vinyl tablecloths we use at the reunion and Tday and curtains....well...that's what was on top, what was under that was several boxes of sandwich bags, long heavy duty foil and non stick foil.There is a few more boxes down there I need to check through before doing any shopping.

We redid our budget...then the landlord gave us the update about propane. Usually he just pays it (gets a discount and passes it along to us since he buys for himself at the same time). We usually own him a couple hundred as I make "budget" payments all year....we are paid in full. YEAH!!!! Also, we dropped more than I thought so I can lower what we budgeted for next year. He also let us know he changed electric providers and it dropped our electric bill down about $50 less of where it would have been. Aug is our worst month (hottest and most humid) followed by Dec (baking for Tday and start of Christmas lights and baking) then Jan (Christmas lights and the last of the baking).

My youngest and I have been going over the Tday dinner menu, figuring out what wasn't eaten, what is needed, sales etc.She acknowledged that it's pretty much cut as much as possible unless the kids start chipping in more.Right now the ones that can afford to do, we figure what we do is part of their Christmas.

She's what we fondly say is the tightest person to do a budget or grocery shop with. I've actually had her argue with me that I didn't need to buy that 3rd can of corn because it was on sale when I needed something else.And don't tell her you have cable and internet when you struggle to pay electric, heat or buy food. She got SNAP for awhile while laid off  and was having to chose between paying rent and buying food and had to attend a class...where she told the instructor they were wasteful for buying rotisserie chicken and canned beans. She took the menu the instructor had, showed what to buy instead and provided recipes and doubled how much food they could get. I had several people tell me about it before she finally admitted the instructor was making her mad for teaching wasteful habits.