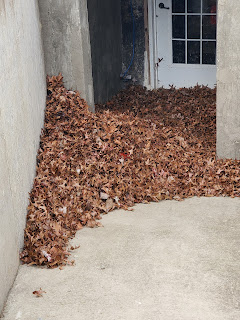 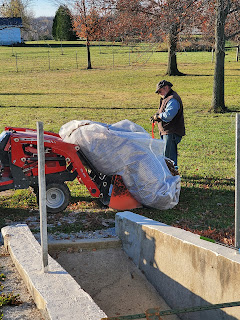 Winds over 30 mph with gusts 50 to 60 mph... Most of the trees lost their leaves. We had very little raking as what stayed in the yard was in the basement ramp. Hubby raked them into the tarp and hauled it to the hay field that E is disking this week. Hubby took the leaves what he had from along the gates to go in the compost pile and then turned the compost pile. JUST FYI, this is where the roof was I prop my feet on.

Hubby is cutting more free wood. One of the Amish brought over a 1/2 of a cord of scrap wood that needed cut up. Couldn't find anyone to take it and he burns coal. Hubby took it.  He had told several of the Amish he sees regularly that he would take scrap wood and they had passed the message along at church.

The propane furnace is on, right now it's way too warm (high 60s to mid 70s) so we have the furnace on 68 during the night and turn it off in the morning Nights are low 50s if not 40s. About another week and we will have the wood/coal stove running again as the high 40s and lows in the thirties which is normal for us is returning. We will turn the furnace down to 50 when we fire up the stove again.

I canned 11 pints of tomato juice finishing the last of the tomatoes.  I want to can the kraut  in the crock and some turkey if I find it cheap enough.

We rewrote our to do list for this month. Keeps us on task with essentials. I added Christmas decorations as I know that takes about a week between in home and outside. Hubby found an old tomato wire cage he thought he got rid of in the barn and brought it to me so I can turn it upside down and wrap the green LED rope lights I got on clearance around it to make a "Christmas tree" for the porch or deck. I also have a cardboard Santa that Mother hung on the staircase door that he found a sheet of paneling that I can attach him to. My Santa is not in good shape but I am not tossing him away yet.

I ordered through The Prudent Homemaker's site (Brandy's) toothpaste at Amazon. I was down to 2 tubes. I checked 3 stores here and they didn't have what I use. I can't use colored toothpaste. You would think white would be easy to get for sensitive teeth. But not here.

Hubby has pretty much wore his work pants to threads. He kept checking TSC which where he gets his work pants. They were wanting over $20 a pair and didn't have his size.  I found carpenter jeans at Rural King in his size for less than $12/ each so I ordered them on my CC that is cash back. Even with shipping it's less than TSC.

E's Mom B gave us a large white sweet potato she had grew. Said her vines were great but the potatoes were on the little side and not very many  of them. But since I took over baby butternut squash (theirs rotted) she was happy to give us this.

I ordered gaskets for my small pressure canner. I noticed when finishing the tomatoes it was dripping a little at the lid. Had family tell me their friend tossed a canner and bought a new one. They pulled it back out of the trash can, cleaned it and bought new gaskets since I said something about you could buy gaskets and get the canner checked by the local extension office.

I ordered a rubber leg for the grate on my gas cook stove.  A friend has the same stove, mentioned her rubber leg also fell off and she couldn't find it. Ordered a whole new grate... I asked why... thinking there was something wrong with the cast iron grate... nope, she didn't think to check to see if she could order just the rubber leg. SIGH.

The "English" (that's what the Amish call us) neighbor on the other side of E is now a widow. Since she is losing part of her income, (she's get her Husband Social Security and hers will end as his was the larger check). She is cutting expenses. Usually the Amish make phone calls from her house as her husband had a landline phone in the garage. E said he offered to pay the whole bill including her internet etc. She orders stuff for them off and on also. But she said no, she can get what internet she wants on her cell phone. He mentioned it to us. We had already thought of putting a phone booth HA HA in for the Amish but since her husband and her were already set up we didn't do anything. We now have a phone in the last stall of the barn. E told everyone to park by his saw mill to keep the horses from coming up the driveway so Hubby doesn't have to deal with buggy and horse when he is parking and Charlotte barking every time someone pulls in. He said they pay for each phone call... even though we wouldn't charge a thing as it's not costing us  anymore to have one out there than it was sitting upstairs in the guest bedroom. I just put a container with is and wrote donations accepted. E said he checked it out and thought it was good. A place to sit, file cabinet so there is pencil and paper along with the phone and donation bowl (cool whip container LOL) and a light so  they don't have to hold a flash light while trying to dial in the dark. That is where Hubby plugs  his truck in and keeps the power washer for the livestock trailer so not using more electric that what was already being used and helps in the community.

We are eating from the pantry. I am back to baking (need to bake bread though).Fruit crisp, brownies, cookies, lemon cake( I will freeze part of it if we get tired of it),  Beef stew, chili, bacon, eggs and hash browns, pot pie (leftover beef stew with leftover beef roast with extra carrots and potatoes we grew).

We pretty much stayed on the menu each of us would have ate if I had went to Son2's.

This coming week we are planning to eat from the pantry also. I will be baking bread and corn bread. I might make corn meal mush since I make corn bread from scratch.

Are you planning to be frugal?