Frugal post...instead of what I did

it's going to be what I am going to do.

Garden is coming in. Monday harvest 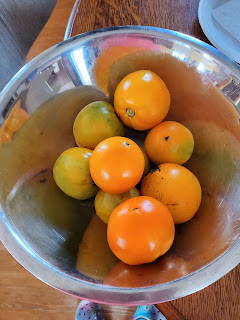 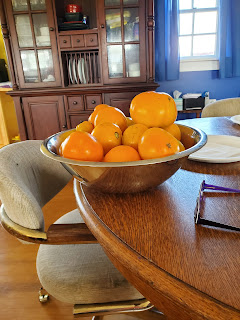 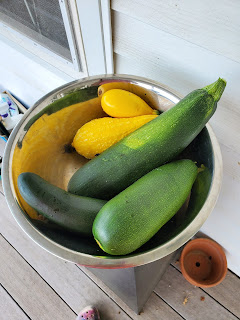 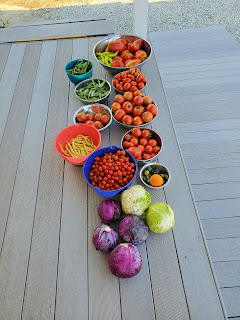 Rest of the harvest that Hubby helped gather.

Lots of food to process. I have a list of what I am low on. I did pull the last of the jade beans, roma beans and yellow wax beans and this is the last of the cabbage. I am canning the red cabbage with apples. Not sure what to do with the other cabbage as the kraut crock is already full. Might make more canned cole slaw.

Email my IRA guy to make sure I am pulling the correct amount of RMD from my inherited IRA since IRS made it clear over the past week they weren't clear how they wanted the money to come out. He is on vacation so it will be sitting there for him when he gets back.  The original rule was it had to be taken out in 10 yrs... so most finance suggested leaving it there. Now it's you have to take a certain amount out each year which is what they meant but didn't say. SIGH. No sense costing me with a penalty from the IRS. BESIDES... if I am not pulling enough I will of course pull more but that means we pull less from Hubby's IRA.

I won't say no to any food offered to me even if I am buried in it from my own gardens. This is with the acknowledgement we might not have much of a garden with having to rebuild most the beds (lasted 4 yrs) next year due to costs of building raised beds. M just sent over a bag of corn. Believe me I don't need any more corn as I now have enough corn for 2 meals a week for a year. We didn't grow corn this year. I didn't say no to cucumbers, beets, zucchini or corn. I now have canned goods in the north and south lofts as over flow from the pantry.

I am almost out of Bunn coffee filters. Son 2 bought the first Bunn coffee pot for Hubby 7 yrs ago. Hubby bought me one 5 yrs ago (we don't drink the same strength of coffee). Both are going strong with a cleaning every 6 months. Son2 splits cost of the filters. I automatically went to Bunn website to order the filters... store filters are too short and allow grounds to come over the top. THEN decided to google the filters. Found them at Amazon for the cheapest. So went through The Prudent Homemaker /Brandy website and ordered them saving $. AND it helps Brandy.

Errands are Tuesday. We will drop off bday card to Son 1 as his bday is the 10th of Sept. and we won't be back over there before that. Grocery list is milk... I will check to see what chicken thighs/wings are running. IF in my price point I will get that also. I might get coke a cola and sprite if that is on sale. PLUS a couple of 2 liters of store brand 7 up/sprite for doing apples and maybe pears if I find them. We like them better if I soak the apples/pears in the pop before canning or dehydrating.

Chicken thighs and wings, ham and turkey is the last of the meat to stock. I might pick up bulk sausage later this fall which is when the ham and turkey prices should be the lowest. I do check freezer depts for turkeys as last year I found some for clearance for half of the normal price. The rest I need to stock is coming from the gardens. EXCEPT apples and pears. I will be canning most of the ham and turkey.

Hubby noted the only things he is tossing in the compost is odds and ends from where I am canning/freezing/dehydrating. Mostly tomato cores and ends of peppers. E offered to add manure this fall after everything in the gardens are done. I reminded Hubby his garden was there so I wasn't tossing much on it. E's hay field has gotten some of the "compost" items LOL.

The only "night light" we have on now is the basement light with that door open so we know/remember that Charlotte is sleeping there. Otherwise we shut the door and she scratches the crap out of the door as she won't bark to be let out or in. Wilbur would bark, Rascal was more of a scratcher.

I am using the grill to "blanch" tomatoes, actually I just cut the core out and toss them on the grill, light the grill, wait about 3 minutes, turn off the grill and wait another 2 minutes. Put in bowl and cover, Usually the skin comes right off (and gets dehydrated) after they are cool enough to touch.

I will be reworking the budget. Had a couple finance people tell me to figure on 10% increase of everything this year with a possible 15% increase on top of that for next year. That is on top of possible colder, snowy winter.

We have debated of how much propane to order. Wood/coal stove was supposed to be in and got bumped a month. We decided to order less than last year.... and if the stove doesn't come in we use our emergency heaters if necessary.

I ordered faraway cages for computers, ham radio, vehicles, and phones. A faraway cage protects from EMP and solar flares. The house already has a protector at the breaker box... Won't be my fault if Hubby loses stuff due to solar flare if he doesn't put his stuff in it. He is a Ham radio operator and part of a home land security in the local area. They try to prepare for the worse and then avoid it.

Have a good week. I will be buried in produce LOL