I should not have asked

what else could break and need fixed or replaced.

So the grass is going to look rough with trimming not being done.

The hot air  now blows on the drivers side in the chevy when you turn on the AC while the passenger side gets cold air.

Hubby spent 2 hrs yesterday putting together one box for the garden. He had to make a stand so he had something to hold the boards while he nailed. I asked why he didn't use the screws we just bought for it... blank look back to me as he admitted he forgot to go to the machine shop and get them.

I fell... okay I fall a lot as I have a twisted spine on top of cerebral palsy.  My limbs do not always do what my mind tells them to do.. I compare them to a 2 yr old.

But this time, I was hanging Hubby's bibs over the drying rack and noticed the knees weren't as clean as I wanted them to be so I was taking them back to the washer.

I KNOW Rascal lays here all the time. 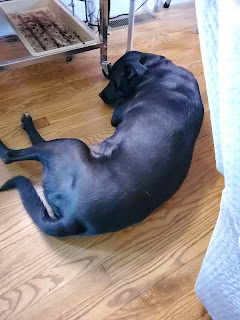 so instead of watching where I was walking I fell on him. He's okay. I did land a bit on his bad leg  so he limped a bit more but by supper he was back to four legs

I, on the other hand, have a bashed right knee that is bruised and aching and 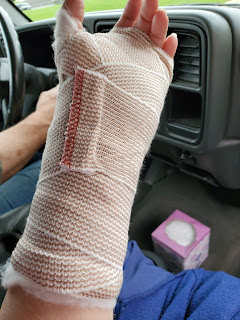 a hairline fracture between the wrist and little finger...SIGH.AKA boxer fracture. LOLOLOL.    I am surprised it wasn't shattered, so my bone meds must be working.It's new fangled splint, part plaster.

This morning I woke up to this 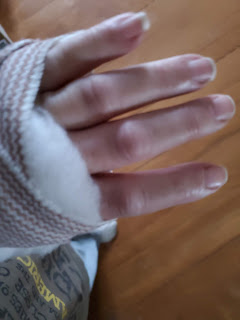 Since Hubby was already gone to an auction over in Holmes co. I called the ER and asked ... they had me take off the top wrap and keep moving my fingers and keep my hand up above my heart when I can.

Its has been almost 3 hrs and they are close to be normal.

I am going to sort plants this afternoon ,Urgent care told me to cover the hand with a trash bag when in dirt or tub. I have to have a follow up with the orthopedic which is hard to get an appt during this time. Urgent care did say it would probably be healed before I got in. Which the nearest date I can see the actual doctor is in June in 3 wks. I did get a return message from my ortho doc office to call Monday morning at 8:15 ish and they would see if they could get a PA to come in to check it.

On the good news side. Hubby decided after he paid all the business bills for this month and half of next month that he wanted to buy something for our 25th anniversary which was in Feb. ....he wanted new dishes... yes really. We have Corelle, white was bought when we got married, I added Iris pattern on our 10th anniversary. . They have slight chips in them. I also have an Asian style stoneware we use  that has chips in it. He wanted all off them replaced.

I got these from Oneida on sale  with discount. They are already in. Hubby loves the cups as he can get his hand in the handle.These are stoneware. They are the reverse of the colors I am replacing. 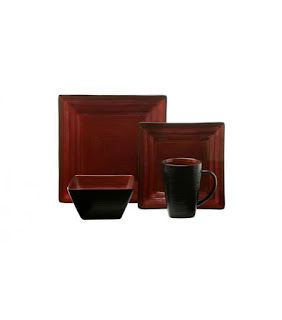 I then went to Corelle and ordered the following

Bandhani pattern: on clearance 2-10 inch plates... it's red band around the plate and will go well with the rest and good for red white and blue(dining room is blue and white woodwork) or Christmas.

The white and the iris replaces exactly what we have.
I only ordered 2 instead of set of 4 as it's only the two of us. If we have a couple come in to eat,  the patterns will work together. If the girls come in and bring kids we use paper plates.

My granddaughter Becka that just graduated. 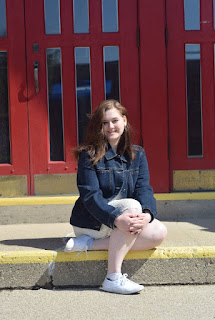 asked for the dishes even if chipped as she is getting her own place come fall and has nothing. Guess hope chests are out of fashion. Her mother is trying to talk her into living with her for a year (she lives with her dad and step mom ) and just focus on college. Instead of trying to work full time and go to college.She definitely won't be staying with her dad as he constantly condemns us... until my granddaughter pointed out he would have not had his diploma if it had not been for us and his parents encouraged him to quit school  and it showed how stupid he could be by slamming us because we are of a different faith (same one we were when he married our daughter in our church). She said it at his parents house family dinner where two of her dad's uncles are good friends(one is a cop) of mine and my late husband.Nothing like getting a lecture from your uncle that verbal abuse is still abused while the other uncle who works for a funeral home pointed out that we paid for his other daughter's funeral when his parents said she didn't exist in GOD's eye because she had not been baptized... she died at birth and they didn't even attend the funeral. OH YEAH, she is her mother's child.

This is our grandson that graduated. 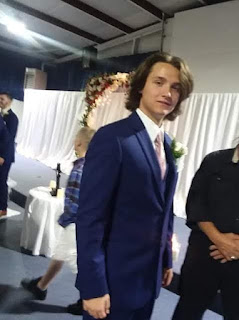 Skyler is going into the Army, constantly says he wants to be like his uncle (son 2). He is a lot like Son 2 in personality.He will continue his education as he can. He like law a lot

Time to prop arm up to above heart level...