What can I do today to save?

Has became the daily question.

Saturday we found pork butt and pork loin marked down. I sliced the loin into pork chops and froze them. The pork butt is now in quart jars in the canner...the scraps and bones in the oven roasting. I'll pick what ever meat is left and use it this week when the temps hit above 90 and heat indices are in the 100s again. We also got some smoked sausage links the size of hot dogs. Works nice for a quick sandwich that Hubby can take with him while working or sliced into 123 pasta (one onion, 2 cups of protein and 3 cups of veggies with 1 lbs. of pasta... sauce is what ever).  Those are now in the freezer .  We haven't turned the AC on since Thurs when the heat wave went down to 85. That will change probably tomorrow.

I harvest peas, lavender, mint, dill , onions, cherry tomatoes, turnips, radishes, lettuce, spinach and basil from the gardens. PLUS a few red raspberries that  the rest should be turning by this weekend along with the blackberries. Some of the potatoes are getting blooms.

The electric bill dropped $15. I think that is because we are making sure the fans are not running when we are not in the room and opening the windows in the morning until it's 80 before Hubby turns on the AC. He also agreed to set that temp at 78. He prefers a bit cooler but since we are saving for the wood/coal stove he is willing to be warmer. LOL

We have started our mornings on the kitchen porch with coffee so often Charlotte now goes out and get a seat and waits for us. If we don't come out she comes back in and woofs softly then goes back out. We now have 3 chairs for the 3 of us LOL. 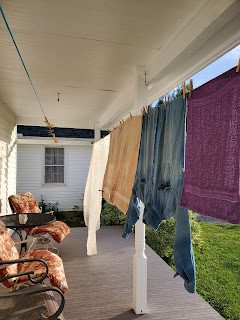 I did have to add an old shower curtain to block the very end. It is lacy so we can still see through it.

M sent over 2 1/2 dozen eggs. I beat them up and put in freezer in 2 egg measurements. Apparently her chickens are running her family of 11 over in eggs.

We found country style pork spareribs on clearance. I let them sit in homemade BBQ sauce and a bottle of coke over night, turning the bag they were in when I thought about it. Hubby grilled them and we had 3 meals from 6 ribs. We had "salad" from the garden every other day.

We haven't gotten rain since last Monday so I will be out tonight watering the gardens.

For what ever reason she has decided she needs to lay in this potato bed. She isn't on the plants them selves so I am at least thankful of that. Hubby will be adding straw to it in the coming week so maybe she will stay out of it then. 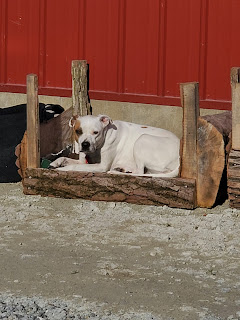 But she's done this since we put it out and planted it. She won't sleep in a dog bed. She is weird LOL